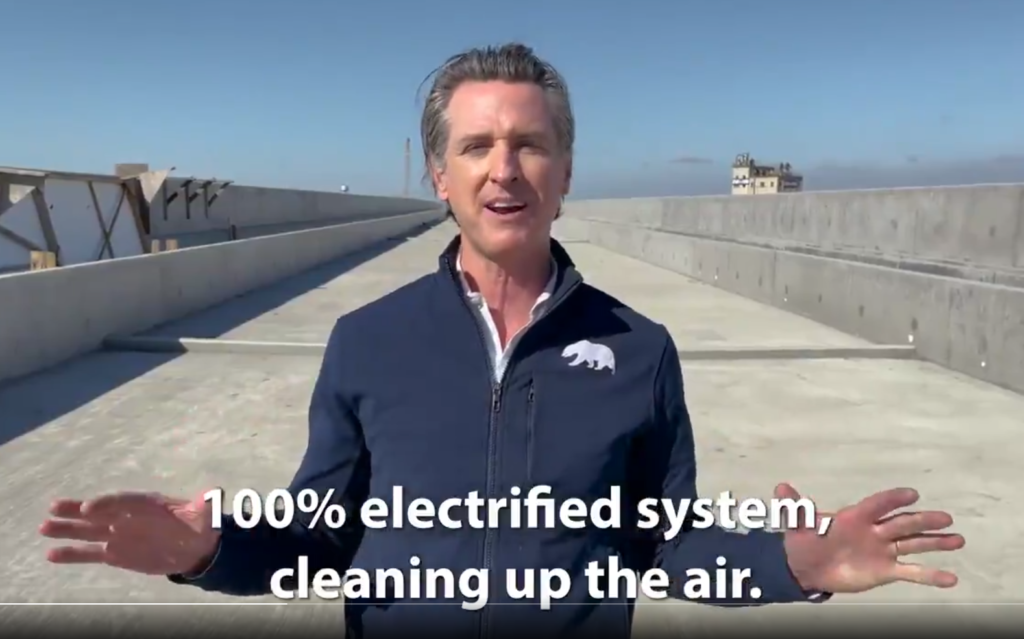 California Governor Gavin Newsom, responding to a significant state surplus in his May budget revise statement, has proposed “$4.2 billion Proposition 1A to complete high-speed rail construction in the Central Valley, advance work to launch service between Merced and Bakersfield, advance planning and project design for the entire project, and leverage potential federal funds.” If this allocation is approved by the state legislature, it should finally spell the end of a push, mostly by Los Angeles electeds, to run diesel rather than electric trains on the initial leg of California’s High-Speed Rail project.

The $4.2 billion is funding already allocated to the California High-Speed Rail project through 2008’s Proposition 1A and not additional funds from the state’s unexpected $100 billion surplus.

Some have interpreted that to mean Newsom’s commitment to HSR is tepid. Perhaps–but Newsom has made a politically astute move. Electrification, while expensive, is essential to powering 200-mph plus high-speed trains and maximizing environmental benefits for the Central Valley, which has some of the worst air quality in the state. Newsom’s budget would lock that in. Completing the Central Valley segment would also provide a proving ground for high-speed rail in America.

With @POTUS @USDOTFRA & @SecretaryPete, we now have federal partners on this transformative, nation-leading project. pic.twitter.com/IHBSwBVLdF

“It’s a pretty strong move,” a source inside the Newsom Administration told Streetsblog of the governor’s revise statement. The source added that Assemblymembers Laura Friedman, Anthony Rendon, Luz Rivas, and other legislators now have a choice: continue to push to divert funds away from CA High-Speed Rail and, by doing so, align themselves with Trumpist Republicans who want to kill the whole bullet-train project. Or they can support Newsom’s budget and still get the billions they want for Metrolink, L.A.’s commuter train system, from the state’s budget surplus.

That would mean a $3 billion pot for rail, a large part of which could go to the proposed Metrolink (and other Southern California) rail upgrades.

Meanwhile, things are looking favorable with the Biden Administration for more federal funds to help complete the project and join Los Angeles and San Francisco by High-Speed Rail. President ‘Amtrak-Joe’ Biden “…explicitly called out High-speed Rail” for more funding, said the project’s Northern California Regional Director, Boris Lipkin. “I think we’re cautiously optimistic that the proposal as we saw from Biden includes a number of different pots we can be eligible for to complete the project.”

And work continues in earnest on finishing designs and getting environmental approval of the Bakersfield to Palmdale segment, crossing the Tehachapi mountains and closing the existing 80-mile passenger rail gap between Los Angeles County and the Central Valley. Once that key but challenging segment is done, it will become possible to run a competitive and fast passenger rail service between Los Angeles and the Bay Area.

“It’s good to see Governor Newsom stepping up his support for the state’s visionary high speed rail project,” wrote the US High Speed Rail Association’s Andy Kunz, in an email to Streetsblog. “Now its time for the federal government to fund the acceleration of the project much the same way they fund road projects all across America.”

“Despite the pandemic and the recession, the project has continued to move forward at an incredible pace. We have over 1,100 workers a day across a dozen sites in the Central Valley,” added Lipkin. “The 4.2 billion in Prop. 1A funds would allow us to continue that momentum and finish construction in the Central Valley and get that segment into service.”