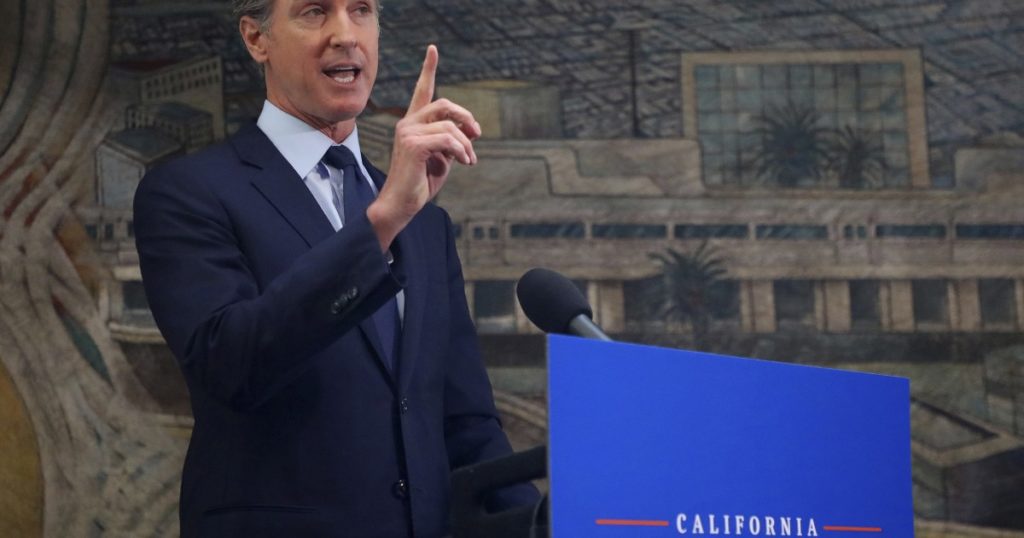 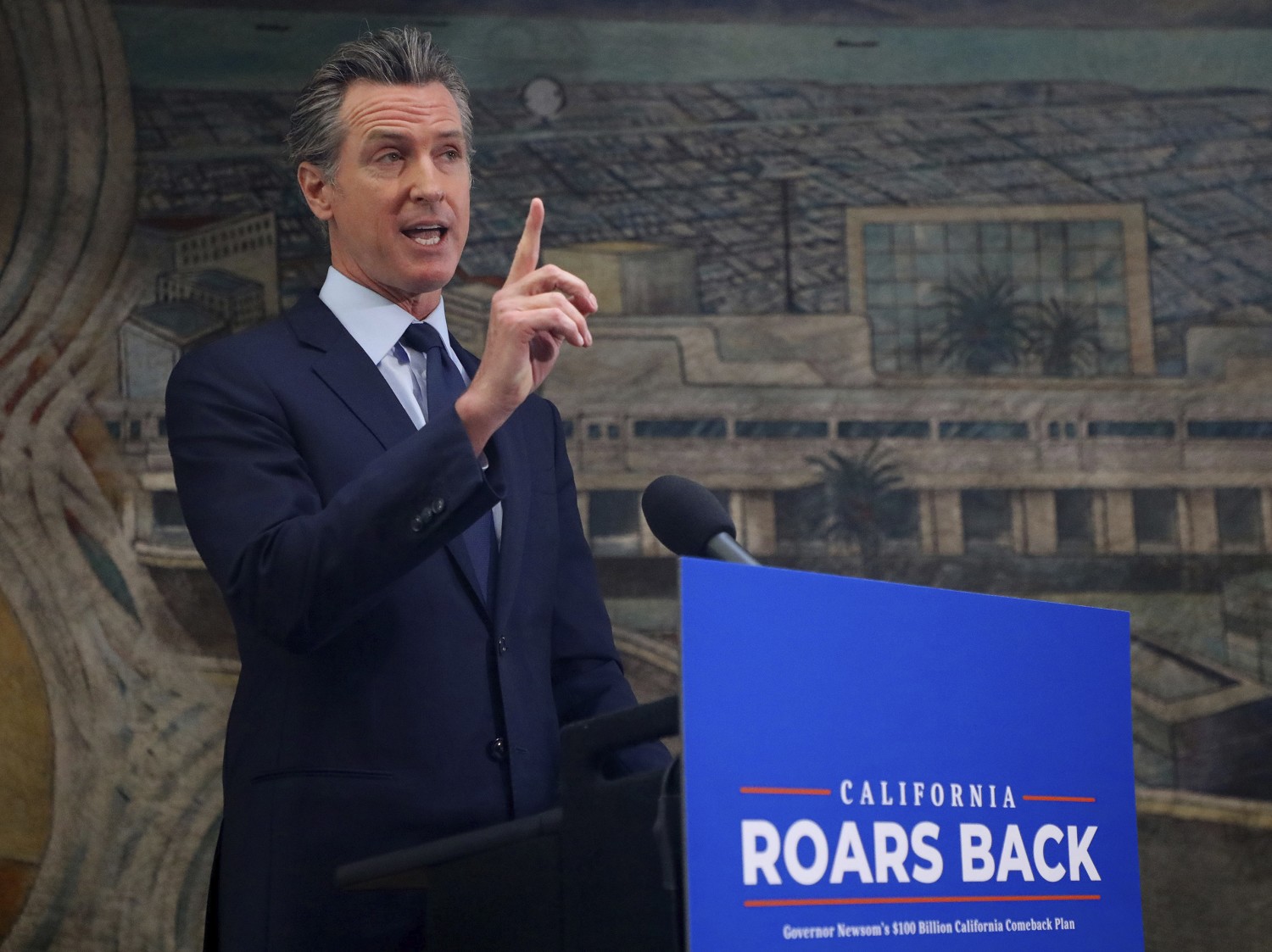 California would embark on the most ambitious era of government spending since its boom times of the mid-20th century under the budget proposed Friday by Gov. Gavin Newsom, an effort aimed at tackling some of the state’s most vexing problems with a bonanza of tax dollars surpassing even the most optimistic predictions.

The governor’s list of spending priorities, which rely on a surprise cash infusion spread over several years that is projected to ultimately top $100 billion, is dizzying: money to house those who are homeless, support entrepreneurs, train workers, educate students and connect them to the internet, fix roadways, prevent wildfires and strengthen California’s power grid.

But, unlike spending plans crafted by those who governed the state during its halcyon days of the past, Newsom’s multiyear investment would not help steer California to a perpetual state of growth. Now, as population growth has stalled and race and income inequities have risen, Newsom views the record spending as fixing what’s broken. His audacious budget proposes to scoop up an excess of tax dollars — expected to surpass $75 billion — largely paid by those at the top of the socioeconomic ladder and redistribute them to those struggling to climb up from the bottom.

The plan is buttressed by $27 billion the state will receive from the American Rescue Plan, the federal relief law signed by President Biden in March and available for a variety of expenses through the end of 2024.

Money from both federal and state sources would pay for a variety of initiatives the governor rolled out earlier in the week. In a series of campaign-style appearances across the state selling what he called a “California Comeback Plan,” Newsom promised to provide tax rebates, reduce homelessness, ensure more educational opportunities for young children and those from low-income families, and provide new grants to small businesses struggling amid the COVID-19 pandemic.

It could be some time before the numbers outlined by Newsom can be fully reconciled. The governor frequently uses unorthodox ways to measure state spending, lumping together dollar amounts that span multiple years. His heralded infusion of $100 billion in new economic assistance, for example, will not be fully accrued to the budget year that begins on July 1. And some spending would rely on whether lawmakers take budget action in the years to come.

Measured more traditionally, the budget proposed Friday by Newsom would spend $267.8 billion in the 2021-22 fiscal year, an increase of more than $40 billion from his budget plan unveiled in January. Additional spending on public schools and larger deposits in the state’s cash reserves make up about one-third of the growth.

Large spending proposals revealed for the first time Friday included a promise of $11 billion for transportation funding and $7 billion to expand access to broadband across the state.

The lack of reliable, high-quality internet in low-income areas in cities and rural communities alike took on a new sense of urgency during the worst days of the pandemic. Newsom’s effort would blend federal and state dollars and take into account some of the goals set by Democratic lawmakers earlier this year, including the need to prioritize unserved regions and update the state’s definition of broadband-eligible internet speeds.

On transportation, the governor’s budget embraces existing plans to tap more of the bonds approved by voters in 2008 to build high-speed rail, even though the project is still in search of funding to be fully completed. The budget plan also provides money for the 2028 Olympic Games in Los Angeles and for infrastructure needed to further encourage the use of zero-emission vehicles on California roadways.

Federal dollars would be used to erase $950 million of the state’s debt in its unemployment insurance fund, money borrowed from the federal government to cover a portion of California’s record payout of jobless benefits during the pandemic.

Beyond sizable new spending on K-12 schools, Newsom’s budget also offers more for California’s college students. The proposal includes a sharp cut in the cost of student housing and additional efforts to lower the cost of textbooks. Funding for the University of California would be boosted by $302 million in the coming academic year, with a $299-million increase for campuses in the California State University system.

The state would set aside $2 billion under Newsom’s budget for wildfire preparedness efforts, including prevention programs and the purchase of new firefighting equipment — boosting the commitment the governor and legislative leaders made last month.

Critics of the Democratic governor have questioned his sudden support for so many high-profile government programs, alleging his motivations are less about good public policy than unabashed politics. Newsom, who faces a recall election this fall when voters could remove him from office before the end of his term, was accused by Republican challengers this week of pandering to voters with billions of dollars in handouts.

Backers of the effort to oust Newsom derided the governor’s plan to offer tax rebates as “recall refunds” and state GOP officials argued that the budget choices were mostly a reflection of the governor’s desire to keep his job.

Few, if any, California budgets have been crafted under such extraordinary circumstances. Forecasters feared last spring that the COVID-19 pandemic would collapse tax revenues, possibly crippling public schools and essential safety net services. But the state’s wealthiest residents — who in some years provide half of all income tax revenues — were largely spared from the economic crisis and paid hefty taxes on a year of sizable capital gains from stocks and other investments.

The governor’s budget presentation sets in motion what has historically been a month of intense negotiations with the Legislature over a final spending plan, which lawmakers must approve by June 15. Members of the two legislative houses have their own priorities — hundreds of budget requests have been submitted in the state Senate and Assembly in recent weeks.

Newsom is likely to be pressured by Democratic legislators to remove all citizenship requirements for full coverage under Medi-Cal, the state’s healthcare program for low-income residents. The budget plan expands full access to anyone over age 60 beginning next spring, regardless of immigration status. But Democrats want all adults covered, an action that legislative budget analysts said earlier this month could run $2 billion a year.