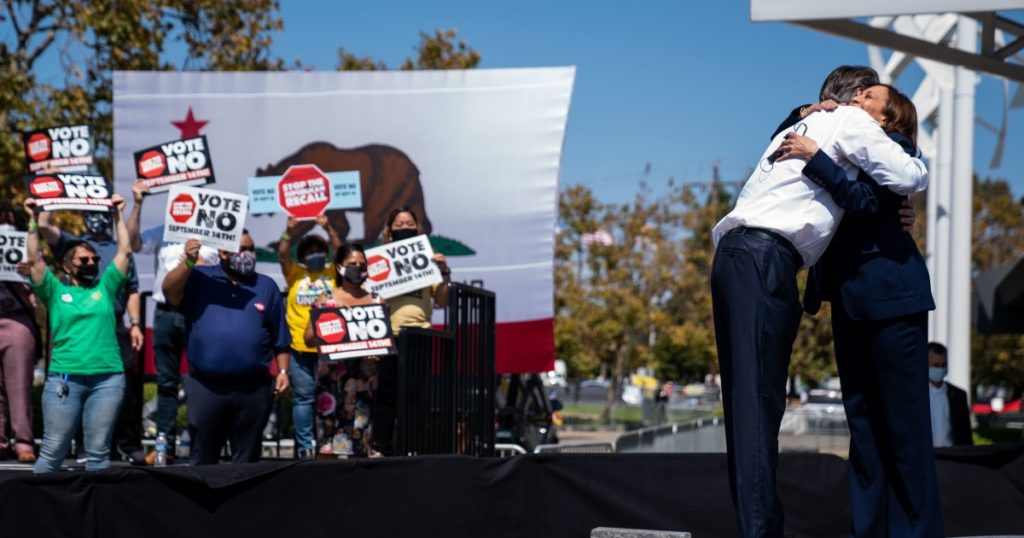 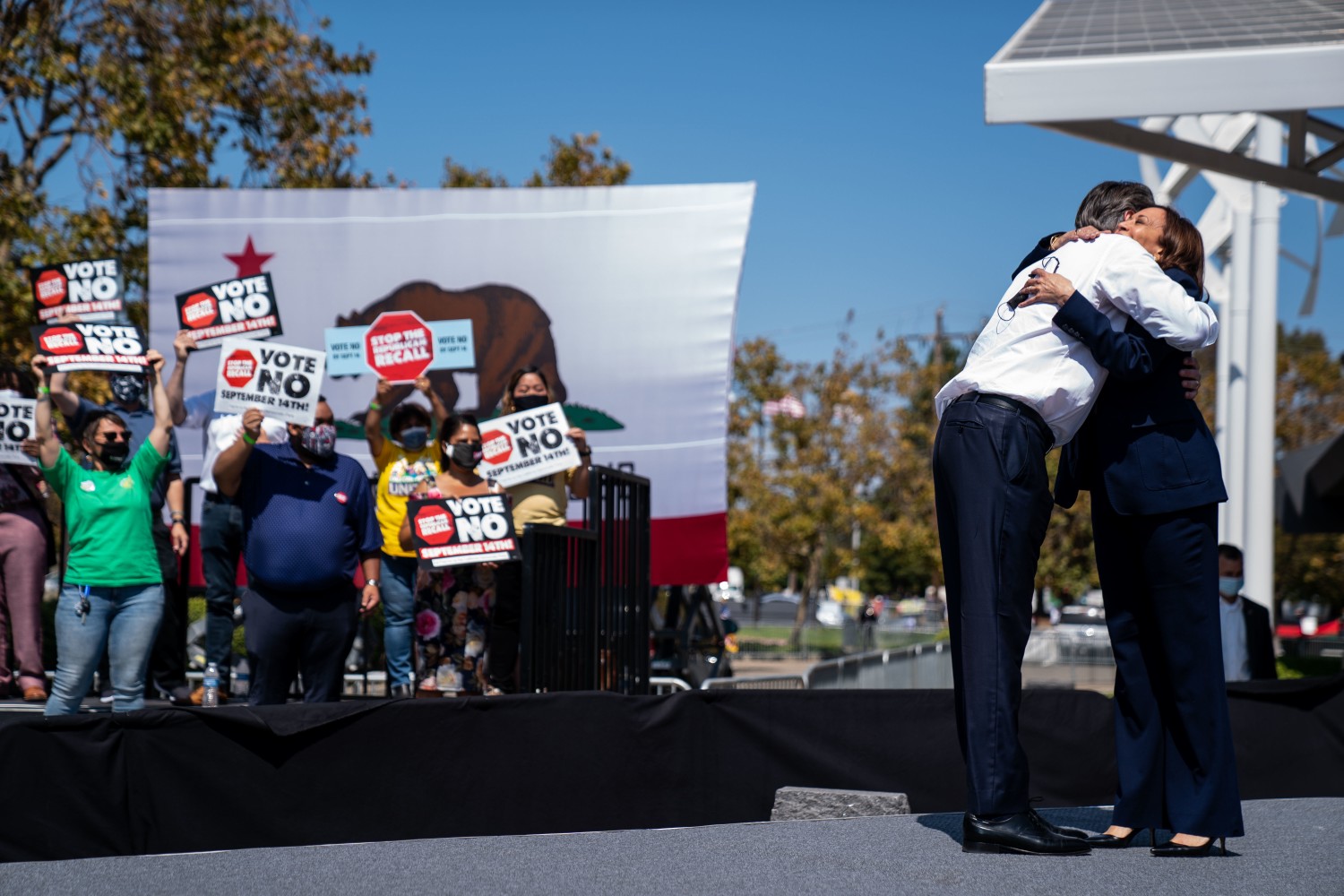 So, at this point, we’ve clearly reached peak political fantasyland.

But what can I say? I’m a realist.

I’m not sure how else to think of the many gushing remarks about the enviable strength of California’s post-pandemic economy, and our policies that ensure living wages and safe working conditions. Or, as Harris insisted, that “Gavin has always understood that if you want to lift up America, you’ve got to lift up working people.”

It was surely a coincidence that the vice president’s words sounded like those of President Biden, who, from the White House, touted “worker power” as essential to “building our economy back better than before.”

“Instead of workers competing with each other for the jobs that are scarce,” Biden said proudly, “everybody’s mad at me because now — guess what — employers are competing to attract workers, having to raise pay.”

Let’s get real for moment, shall we? Because things aren’t that great for everyone.

Despite Democrats’ many valiant policy efforts — from implementing paid family leave to the child tax credit — we’re still in real danger of building back an post-pandemic economy that’s as uneven and unfair as it always has been to people of color at bottom of the income scale.

Not that most Californians believe Republicans, with their shortsighted, pull-yourself-up-by-the-bootstraps ideology, are better equipped to address these issues. After all, it wasn’t Newsom whom homeless people angrily chased out of Venice on Wednesday; it was his would-be replacement, conservative talk show host Larry Elder.

But assuming Newsom prevails in next week’s recall election, it remains to be seen what he can do for the many working class people — particularly Latino and Black people — who are struggling to make ends meet and, in some cases, are on the verge of eviction.

Longtime civil rights leader and labor activist Rev. James Lawson Jr. was sounding the alarm about this in a conversation we had way back in July, just a few days after the UCLA Labor Center was renamed in his honor.

He calls it “plantation capitalism.”

Despite my optimism, Lawson wasn’t entirely convinced of what we’ve all been hearing for months: namely that workers, across the board, are regaining power over employers. That the post-pandemic labor shortage is simply a function of picky Americans who are reassessing what conditions and what pay they find acceptable to go to back to work.

For sure, help wanted signs are everywhere, and employers large and small are desperate to fill open positions.

Hiring bonuses no longer even seem to do the trick. Now it’s all about the incentives. Target, for example, is offering to pay college tuition. Applebee’s is offering free food. And Amazon, ever inventive, is promoting that people who apply to be delivery drivers won’t be screened for cannabis.

He cited the more complicated experiences for workers of color, particularly Black women. Indeed, women, in general, have borne the brunt of the pandemic economically.

“Plantation capitalism says that working people don’t need to be treated as people,” Lawson said. “They are more of a commodity and property than they are human.”

According to the latest report from the U.S. Bureau of Labor Statistics, the unemployment rate for Black Americans jumped from 8.2% in July to 8.8% in August. The reason is that while more Black people were working in August than July, the number looking for jobs was even higher.

Moreover, the unemployment rate for the other groups dropped in August. The overall rate was 5.2%, and for white Americans 4.5%.

William Spriggs, chief economist for the AFL-CIO and an economics professor at Howard University, questioned how desperate employers really are to find workers when so many Black Americans can’t find work.

As Spriggs put it to multiple journalists, it’s “the self-evident discrimination in the labor market revealing itself.”

There also are the anecdotal stories.

On a recent Wednesday, I listened to two Black women talk about the racial discrimination, harassment and retaliation they had allegedly experienced, spelled out in a pair of lawsuits filed against their former employer, the Chateau Marmont.

“People who are Black have had to go through these things,” April Blackwell said, speaking to a small crowd of supporters from the back of a flatbed truck parked in the shadow of the famed hotel as the sun began to set over Sunset Boulevard.

Her words echoed those of Thommi Gross.

“Being who I am on the outside — my skin tone — being a woman, we’re not believed,” she said. “We’re working twice as hard for less pay and we are shown that we are not as valuable. So it’s really frustrating. It’s disheartening. It’s dehumanizing.”

No one at the Chateau Marmot returned my request for a comment, probably because the protest was nothing out of the ordinary.

It was merely the latest such demonstration organized by Unite Here Local 11, which has been calling for a boycott ever since hundreds of Chateau Marmont employees complained they were laid off without insurance or severance, just as COVID-19 cases were exploding last year.

Both Gross and Blackwell lamented that their claims will be handled in private arbitration, rather than where they were initially filed in state court. It’s a fate that, despite legislative changes and the #MeToo movement, continues to disproportionately affect women and workers of color.

It’s a reminder of just how much about the labor market is more complicated for our people.

If Newsom survives the recall election — and polls increasingly indicate that he will — his challenge will be to live up to the praise that Harris bestowed upon him on Wednesday.

“I want Black women to be valued in the workplace,” Gross said. “I want any employee who feels like they’re not in a safe space. That they can come to their employer, and they get the support and the protection they need.”

That’s your dose of reality for today.