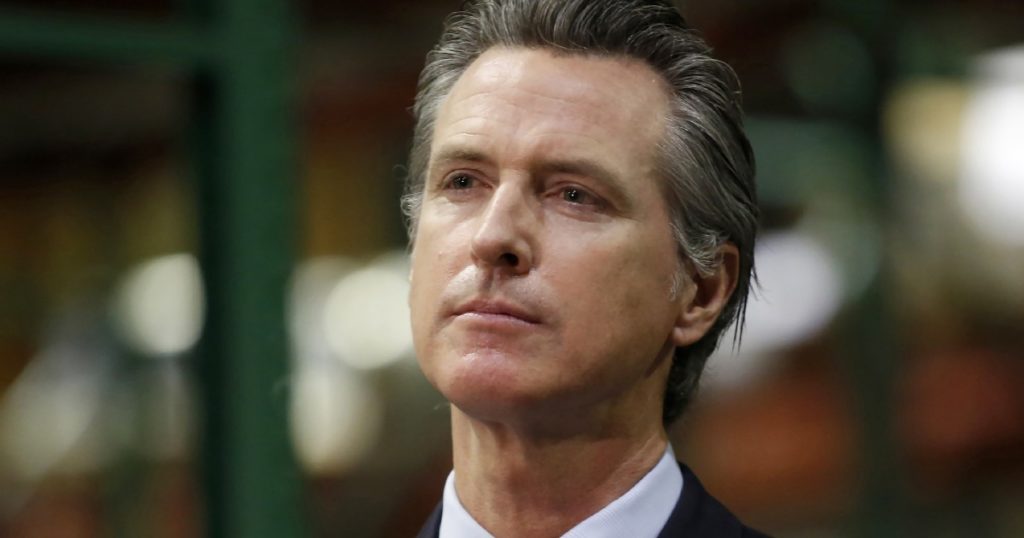 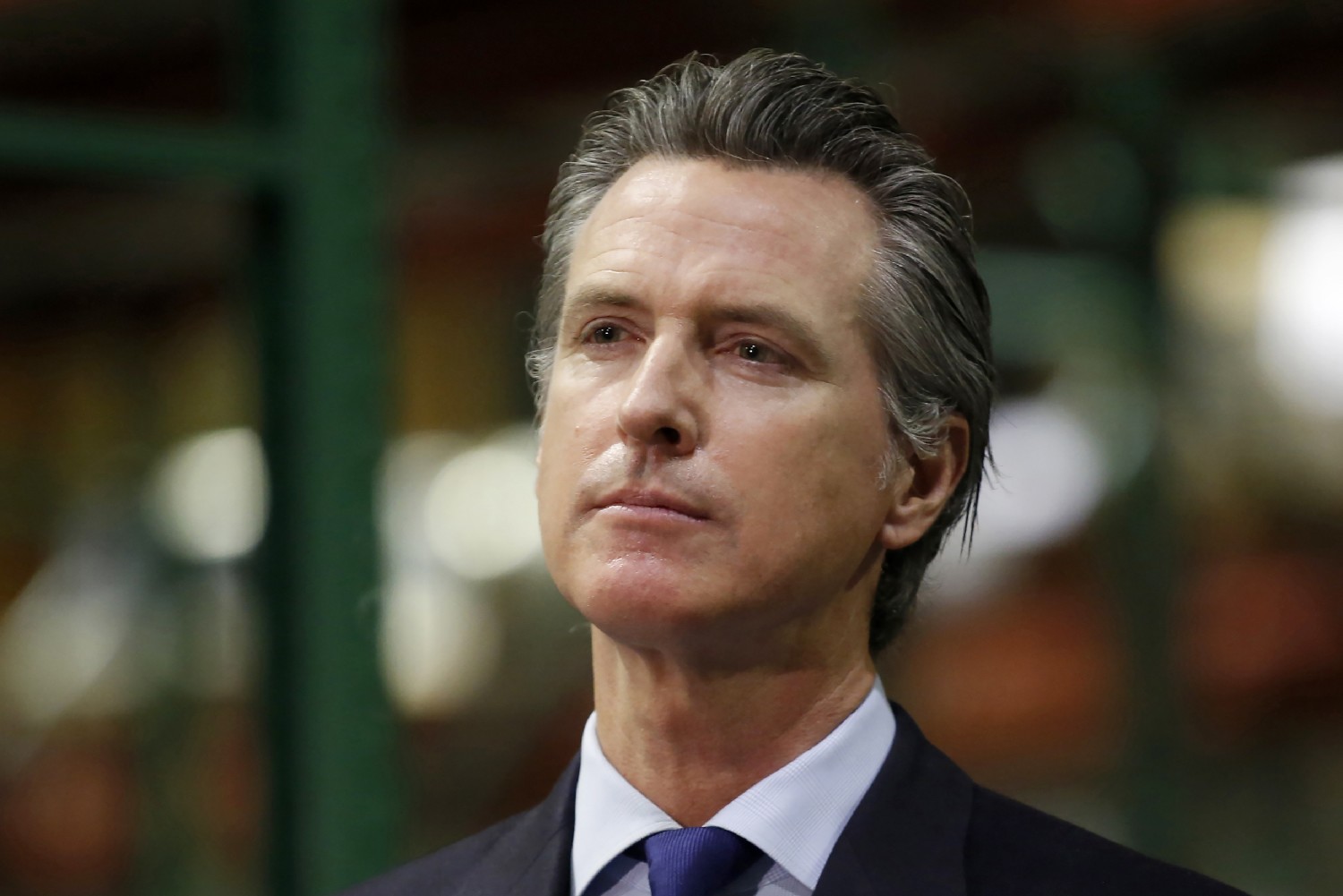 After weeks of subsisting on a diet of bitter criticism over COVID-19 vaccine distribution problems, sudden changes to regional reopenings and a lack of statewide action to get kids back in classrooms, Gov. Gavin Newsom gorged on a bit of political comfort food Wednesday while surrounded by loyal Democrats to announce a new vaccination partnership with the federal government.

The praise was dished out in generous portions.

“I cannot tell you how lucky we are in California to have Gavin Newsom as our governor,” Oakland Mayor Libby Schaaf said. “He is out hustling for Californians every day.”

But Newsom must also hustle to stop — or at least weaken — the campaign to force a special election this fall in which voters could remove him from office. Conceived by fierce partisanship, the recall effort now hinges on Newsom’s leadership. And though a pair of public polls this week found voters haven’t given up on Newsom, the surveys suggest the pandemic has sharply weakened his standing.

“This should be a temporary problem for the governor that he should be able to overcome,” said Mark DiCamillo, polling director at UC Berkeley’s Institute of Governmental Studies. “He hasn’t been able to get out in front of it, but he has to do it.”

The rough days ahead for Newsom will test a political career that has largely gone without significant challenge — a swift rise through the ranks of San Francisco politics two decades ago to appointments on a city parking commission and the Board of Supervisors, two terms as mayor, two lightly contested elections for lieutenant governor and a gubernatorial victory in 2018 by the largest winning margin in modern California history.

But for the first time, there are signs that Newsom’s charisma could have its limits. The Berkeley poll released Tuesday asked voters to consider 10 different descriptions of the governor’s pandemic rules and regulations. The list considered by the poll’s 10,357 registered voters was evenly split between positive and negative assessments.

Sixty-two percent of voters surveyed agreed Newsom’s rules have been “inconsistent.” Sixty percent agreed they’ve been “confusing.” And though majorities also said the rules have been “necessary” and “science-based,” they also concluded the governor’s efforts have been “ineffective.”

The message seemed to be clear: Californians realize sacrifices must be made to combat the deadly pandemic but are deeply skeptical of the way Newsom is going about his efforts to do so.

“They’ve lost faith in him,” DiCamillo said of the voters’ reactions. “It has implications for trust on other issues.”

Slightly better job approval ratings were found by a separate poll conducted by the Public Policy Institute of California. But those results were also gloomy.

“He’s lost that broad-based sense of people feeling good about being in his hands,” said Mark Baldassare, PPIC’s survey director and CEO. “The governor’s fate is tied to what happens with COVID.”

Whether that fate rests on the outcome of a recall election in the fall or a reelection campaign in 2022 remains to be seen. Fueled by a caustic mix of far-right groups peddling voter petitions alongside dangerous conspiracy theories and the cash of more mainstream, mostly Republican donors, groups promoting a recall election boast that they’re within striking distance of gathering the almost 1.5 million verified voter signatures needed to put the issue on the statewide ballot.

“The world used to look to California for a brighter future,” former San Diego Mayor Kevin Faulconer says in an online ad released Tuesday to launch his campaign to replace Newsom. “But now it’s become a land of broken promises. And the promise breaker-in-chief is Gavin Newsom.”

Recall petitions have been filed against every California governor since 1960, but only the landmark 2003 effort ever made it to the ballot. Few will forget that it ended with the removal of incumbent Democratic Gov. Gray Davis, with voters using the second part of the two-step recall to choose a movie star, Republican Arnold Schwarzenegger, to replace him.

Like the current campaign, the Davis recall was pushed by Republicans. In both cases, the official recall petition included a litany of longstanding conservative grievances later eclipsed by events of the day. And in 2003 as it is now, public polls showed only about one-third of voters thought a special election to remove the governor was a good idea.

“Californians don’t really like this process that much,” Baldassare said, noting how voters traditionally feel about a recall. “But we’re willing to use it if we’re really unhappy. The question is: Do we get to that point?”

Davis is among those who are skeptical.

“He’s doing a better job than people appreciate,” he said of Newsom. “People will start to see the light. They’ll see that 2021 is going to be a year of transition [and] they’ll start to feel better about themselves.”

Key to that assessment is speeding up the effort to vaccinate millions of Californians. Newsom’s political fortunes could rise if President Biden’s COVID-19 agenda is successful. And where Democrats had only an eight-percentage-point voter registration advantage over Republicans in 2003, they now tower over the GOP by 22 percentage points.

In fact, Democratic strategists believe the Berkeley poll proves how hard it would be to recall Newsom, noting that its finding that 35% of voters support the effort is comparable to the 32% of votes cast for GOP challenger John Cox in 2018 (who also says he’d run in a recall election) and the 34% won by former President Trump in November.

Newsom has batted away questions about the recall, limiting his comments on the matter to the formal response he filed to the petition last year.

“The last thing California needs is another wasteful special election supported by those who demonize California’s people and attack California’s values,” he wrote.

Recall supporters insist their ranks include disaffected Democrats and the Berkeley poll suggests that’s possible, with almost one-quarter of Democrats disapproving of the governor’s job performance and one in five self-described liberals also unhappy with Newsom.

Still, Democrats generally remain united behind the party’s standard-bearer. While legislators and interest groups have begun to grumble a bit more loudly about aspects of the governor‘s performance during the public health emergency, they’ve also taken pains to insist they don’t want him recalled — they just want him to do a better job.

To fight efforts to oust him, Newsom will need to improve his standing in Los Angeles, home to the largest single bloc of voters in the state. Pollsters often find similar views among Los Angeles and Bay Area voters on state political leaders but the two regions are split on their current views of the governor. The Bay Area, in fact, is the only region in the state where a majority of voters said they like how he’s handling his duties.

While Newsom’s odds of surviving a recall remain strong, his chances of avoiding the election are less certain. No single action has been more consequential in boosting the recall effort than the decision by a Sacramento judge to add five months to the timeline for gathering signatures, agreeing with proponents that COVID-19 fears had limited their ability to circulate the petitions.

The deadline for signatures to be submitted to election officials is March 17, two days before the anniversary of Newsom issuing the nation’s most sweeping stay-at-home order last year.

No one could have imagined what would happen in those 12 months. For California voters, the question may soon be whether their governor has made things better or worse.