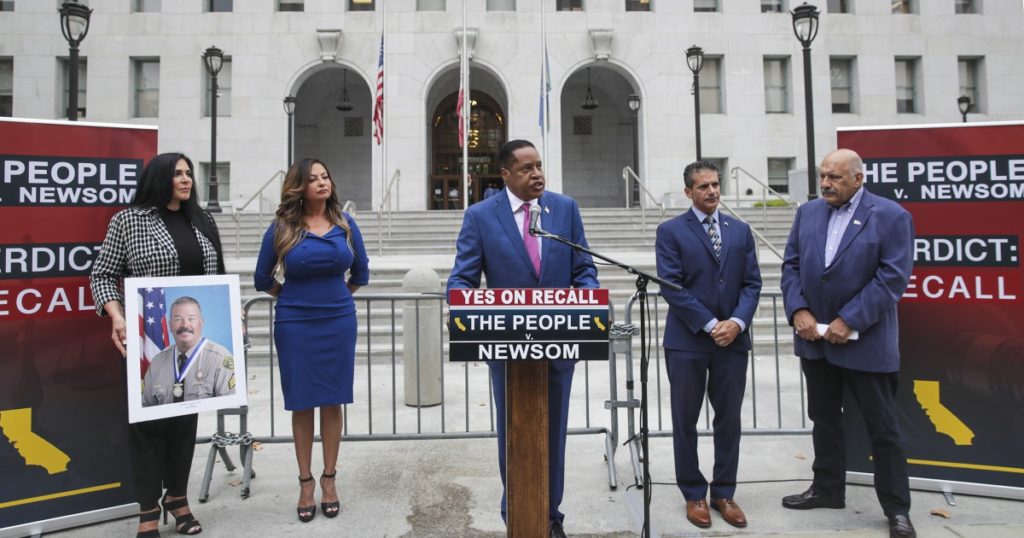 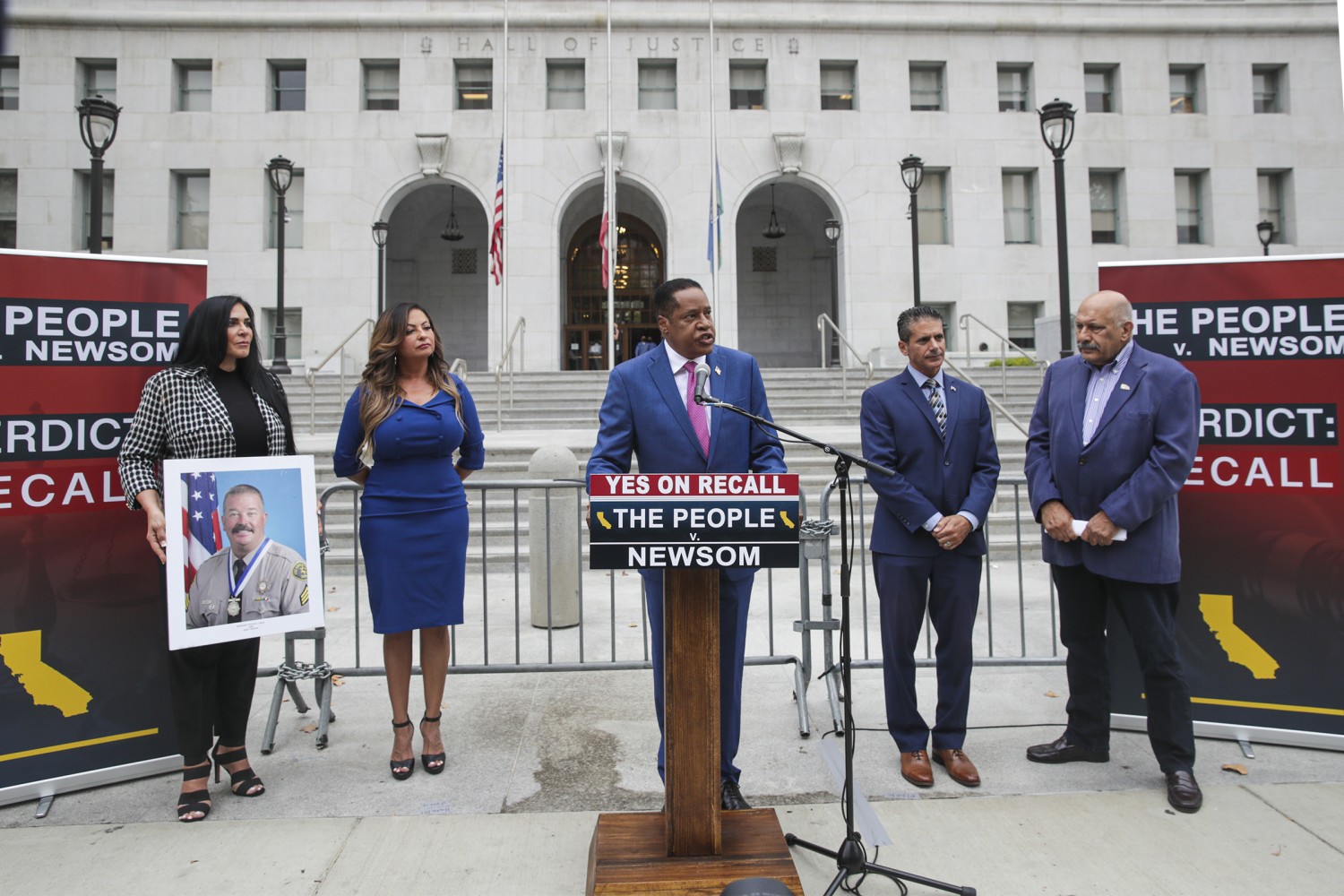 Gov. Gavin Newsom and Republican Larry Elder, the leading candidate trying to replace him in the upcoming recall election, on Thursday accused each other of putting the lives of Californians at risk, an increase in campaign hostilities that comes a day after a new poll showed the governor appeared likely to survive efforts to oust him from office.

Appearing in San Francisco’s Chinatown, Newsom attacked Elder for vowing to immediately rescind the state’s public school mask mandates and vaccine requirements for state and healthcare workers, a change the governor said would reverse California’s success in mitigating the spread of COVID-19.

“That’s a life and death decision,” Newsom said of the Sept. 14 recall vote at a news conference with Asian American leaders supporting his campaign.

Meanwhile Elder made an appearance at the the Hall of Justice in downtown Los Angeles on Thursday, where he was flanked by those who have lost loved ones to violent crime, and accused Newsom of failing to keep California safe through his policies and his support of progressive prosecutors such as L.A. County Dist. Atty. George Gascón.

Calling Gascón “soft on crime,” Elder blamed him for a spike in violence in the state’s largest city and criticized his refusal to make use of sentencing enhancements in most cases.

“Without Gascón, these crimes would be prosecuted to the fullest extent of the law. Gascón … is a product of our governor, Gavin Newsom,” Elder said.

The scenes that played out more than 400 miles apart Thursday morning followed the release of the poll by the nonpartisan Public Policy Institute of California that indicated that Elder has cemented himself as the leading replacement candidate in the recall campaign.

The survey also showed that most likely voters wanted to keep Newsom in office. Fifty-eight percent of voters surveyed in California oppose removing Newsom from office compared to 39% who support recalling the governor.

Newsom said Thursday that he won’t allow those findings to make him complacent.

“Polls don’t vote, people vote. Period, full stop,” Newsom said. “This is an off year, off-month election. That’s what recall is about. It’s designed to catch you asleep.”

While the Democratic governor said California’s recall process has been “weaponized,” he declined to say if he thought changes to the system were warranted.

Newsom reiterated his concern that many Democratic voters may have been unaware that a recall election was even taking place, while Republicans have by charged up by continual coverage of the recall on Fox News, Newsmax and other conservative media outlets.

“I think people are waking up to what this is about, and what Larry Elder is all about,” Newsom said.

As he has for weeks, Newsom ripped Elder for opposing abortion rights, for saying there should be no minimum wage and siding with former President Trump’s false assertion that the 2020 presidential election was rigged against him.

Democratic Atty. Gen. Rob Bonta, whom Newsom nominated to the post to fill a vacancy created when Xavier Becerra became secretary of the U.S. Department of Health and Human Services, also accused Elder of being anti-immigrant and misogynistic. The latter was a reference to Elder’s past comments about women, including a 2000 column where he said women “know less than men about political issues.”

“Larry Elder is the exact opposite of this governor and he’s very dangerous. His leadership will lead to lives lost,” said Bonta, who joined the governor on Thursday.

Shortly before the Bonta made those comments, Elder did he best to tell California voters what Newsom was all about.

Elder accused Newsom of being directly responsible for the actions of Gascón and San Francisco Dist. Atty. Chesa Boudin and lambasted the governor for a wide range of issues including his management of state forests amidst surging wildfires and steps taken to reduce the state’s prison population during the COVID-19 pandemic.

“The No. 1 responsibility of government is to protect people and property. No. 1. By far,” Elder said. “And under this Governor, some 20,000 convicted felons were released early … many of them violent offenders, and based upon statistics, they are likely to re-offend. What could possibly go wrong?”

While crime has risen this year in Los Angeles, the surge traces back to before Gascón took office and mirrors a surge in homicides seen in most American cities last year, regardless of the politics of their elected prosecutor.

Violent crime also actually decreased in San Francisco during 2020, Boudin’s first year in office. Presented with those statistics, Elder said the Newsom, Gascón and Boudin were still to blame for their support of “false narratives” about police and for emboldening criminals by supporting policies aimed at reducing high incarceration rates, like Proposition 47.

“It’s called the Ferguson effect, or the George Floyd effect, pushed by the left, who are attacking officers for doing their job, and what’s happening is officers are pulling back. Arrests are down. Stops are down. When arrests are down and stops are down crime goes up,” he said. “When you decrease the possibility of a bad guy being caught, being convicted and being incarcerated, crime will go up and I absolutely trace those policies right to the doorstep of people like Gascón and Boudin and Governor Gavin Newsom.”

As he seeks to unseat Newsom, Elder was joined by a number of crime victims who have spearheaded an effort to recall Gascón from office in Los Angeles. The local effort, which Elder supports, has garnered less than half the signatures needed to force a recall election. The recall effort must hit its signature mark by late October.

Tania Owen, the widow of a murdered L.A. County sheriff’s department sergeant who has emerged as one of the leading proponents of the effort to recall Gascón, said she wants Newsom booted out of office because he needs to be held accountable for his role in Gascón‘s election.