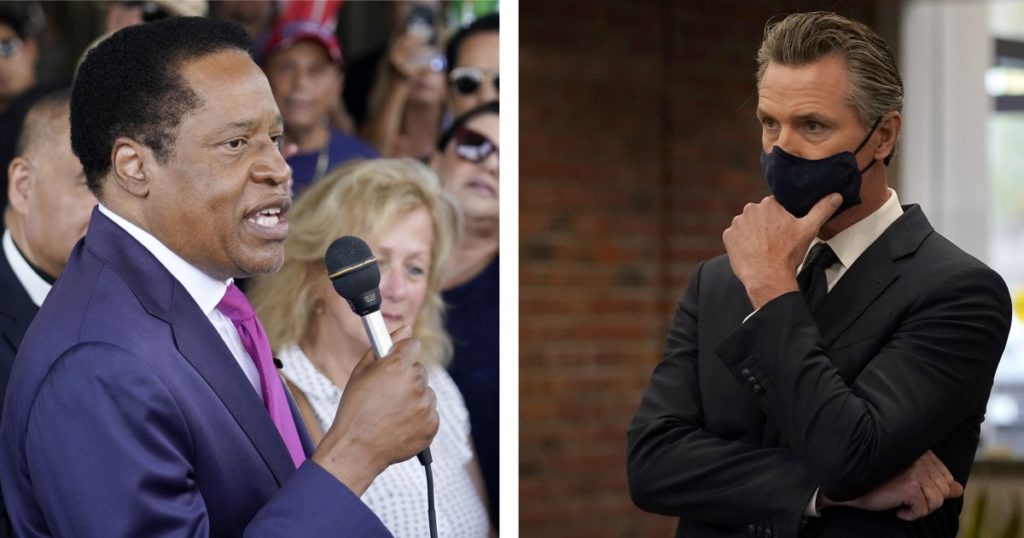 Gov. Gavin Newsom on Thursday attacked the Republican topping the field of candidates trying to replace him in the September recall election, calling conservative talk show host Larry Elder a climate change denier who would restrict abortion rights and end the minimum wage if elected.

Newsom’s broadside against his opponent comes just a week after a poll showed that likely California voters are almost evenly split over ousting the governor in the Sept. 14 recall election, and showing that Elder leads the pack among the candidates in the race.

For months Newsom has criticized the recall effort as the handiwork of far-right supporters of former President Trump and a Republican Party intent on undermining his election in 2018, shying away from personal attacks on the candidates hoping to take his place in Sacramento.

But in a Zoom call with volunteers working on his anti-recall campaign, Newsom hit out at Elder, calling him a major Trump supporter — a rallying cry in a state won overwhelmingly by President Biden in the 2020 presidential election. Newsom also accused Elder of being a threat to abortion rights established under the landmark Roe vs. Wade U.S. Supreme Court decision in 1973.

“The leading candidate thinks climate change is a hoax, believes we need more offshore oil drilling, more fracking, does not believe a woman has the right to choose [and] actually came out against Roe v. Wade, does not believe in a minimum wage,” Newsom said.

Elder has shaken up the recall campaign since joining the field, both in polling and in enthusiasm among GOP donors. The self-described “Sage from South Central” said conservatives such as fellow radio host Dennis Prager persuaded him to run because of his stances on the challenges facing California and because of the built-in support base of Elder’s long-time radio audience.

A spokeswoman for the Elder campaign accused Newsom of “lashing out” at the Republican candidate because he realizes that his political career is on the line.

“Gavin Newsom is running scared. He cannot defend his horrendous record on crime, homelessness, the rising cost of living, water shortages, uncontrollable wildfires, and tyrannical COVID lockdowns,” spokeswoman Ying Ma said in an email. “Larry believes in liberty, personal responsibility, private enterprise, and the ingenuity of the people of California, not Newsom’s repressive edicts or the cronyism of his allies.”

On Thursday, Newsom criticized Elder for recent comments to the Sacramento Bee and San Jose Mercury News in which he said the ideal minimum wage in California would be $0.00.

“I’m not making that up — Zero. I mean, he’s not even debating the merits or demerits of $15 [an hour],” Newsom told supporters.

Newsom also warned that, if he is recalled, any Republican who took his place would have the power to reshape the state court system and would have political allies such as Republican Leader Kevin McCarthy (R-Bakersfield).

Californians voting in the Sept. 14 election will receive a ballot with two questions: Should Newsom be recalled from office and, if he is ousted, which replacement candidate should take his place.

If Newsom is recalled, the candidate on the ballot who receives the most votes wins — no matter how many votes he or she receives. The crowded field of candidates is expected to splinter the electorate, which means a Republican who reels in just a small fraction of the vote could become California’s 41st governor. No Republican has won a statewide election in the state since 2006.

A recent UC Berkeley Institute of Governmental Studies poll cosponsored by the Los Angeles Times found that Californians who say they expect to vote in the recall election are almost evenly divided over whether to remove Newsom from office. Though Democratic voters far outnumber Republicans in California, the GOP’s enthusiasm over the recall promises to inflate the potency of the anti-Newsom vote in September, according to Mark DiCamillo, director of the poll.

Newsom said as much on Thursday’s Zoom call to volunteers.

“At the end of the day, this is all about turnout,” Newsom said. “They may turn out in record numbers. But there are more of us, meaning more that believe like us — including many Republicans that just reject Trump and Trumpism.”

Newsom told the volunteers not to underestimate the damage a Republican governor could do in California, saying he didn’t want to see the state follow policies similar to those of Florida’s Republican governor, Ron DeSantis, and “go off a cliff.”

DiSantis’ national profile has risen in large part because of his support for Trump and response to the COVID-19 pandemic, which bucked restrictions to stop the spread of the coronavirus. The Florida governor has prohibited mask mandates in schools, a ban that remains in place despite a major surge in cases driven by the highly contagious Delta variant.