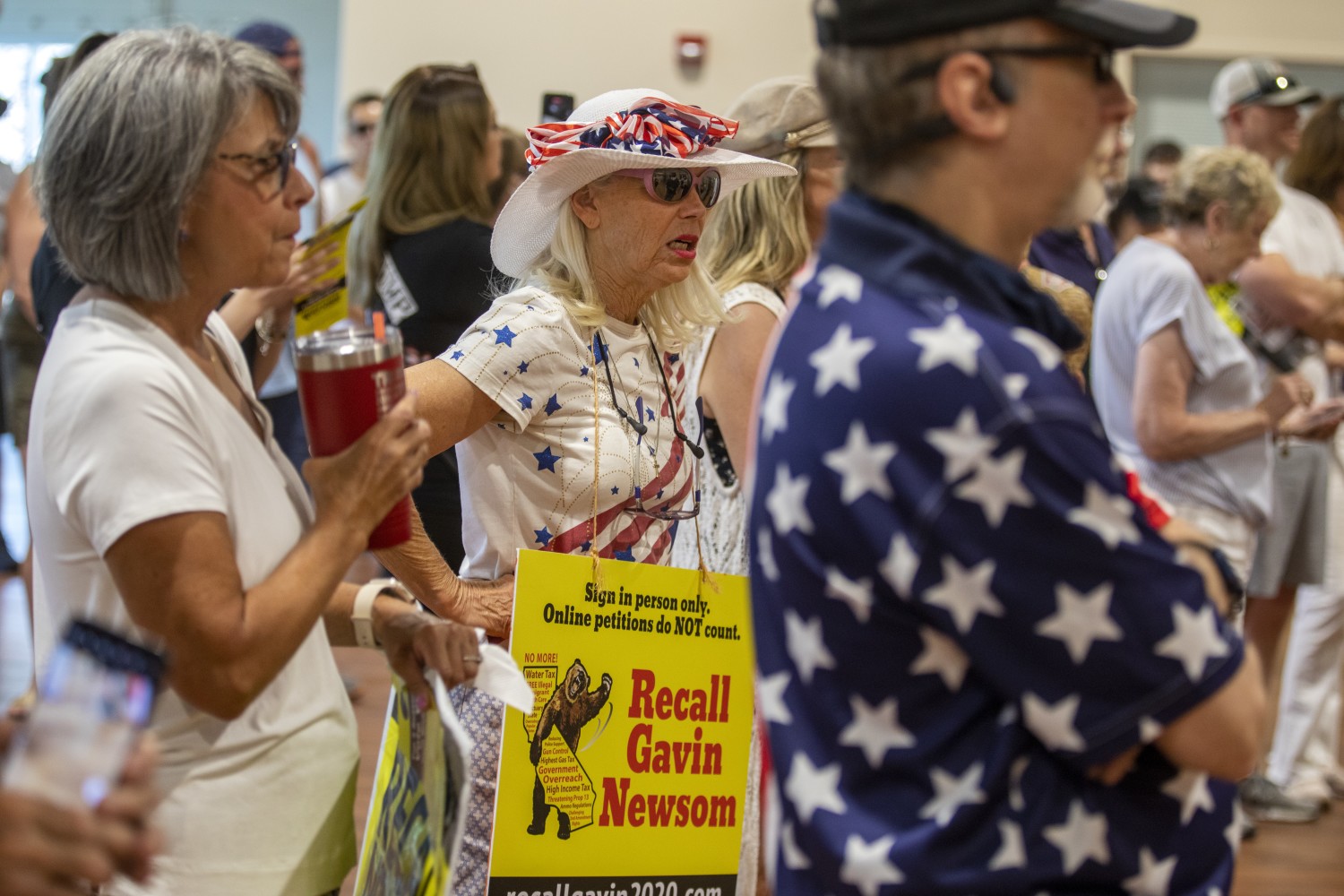 For weeks, legal scholars have debated whether the recall election of Gov. Gavin Newsom could be found unconstitutional if Newsom failed to realize a “no recall” majority of the ballots cast and was ousted by a candidate who received fewer votes than he did.

Although it’s impossible to predict how courts will rule, many experts say the current recall process has long survived legal challenges, and probably would again, even if a fringe candidate won on Sept. 14 and became governor with a minority of overall votes.

That view is based on court decisions on election law, especially rulings stemming from the recall election of Gov. Gray Davis, when voters removed Davis in 2003 and replaced him with Arnold Schwarzenegger, a popular actor who went on to win reelection.

In that case, more people voted for Schwarzenegger than Davis so the candidate with the most votes won. Even so, California’s recall scheme permits a candidate with fewer votes to prevail over an incumbent, as was demonstrated by the state’s last successful recall of an elected legislator.

In 2018, voters recalled Sen. Josh Newman (D-Fullerton). On the recall question, 41.9% voted to retain Newman. On the second ballot question, in which voters are asked to select a successor, a Republican won with only 33.8% of the vote. An incumbent who faces a recall is not permitted to be named as a successor candidate on the second part of the ballot.

“Maybe I should have been reinstated,” joked Newman, after reading a recent essay by legal scholars who helped spark the current debate by arguing that California’s recall law violated the federal Constitution.

Newman was in fact reinstated — but by voters, not the courts. He booted the Republican who beat him in the recall in 2020 and now serves in Sacramento.

His ouster was one of 179 recall attempts of state officials in California since 1913. Eleven qualified for the battle. Of those, six incumbents, including Newman and Davis, were ousted and replaced with other people running on the same ballot.

Unlike in 2003, when Davis faced a recall vote, the attempted removal of Newsom has stirred few court challenges by recall foes.

Constitutional law scholar Vikram D. Amar, who closely followed the litigation during the Davis recall, said the failure of most lawsuits probably discouraged attempts this time.

“Maybe people got the message,” said Amar, law school dean of the University of Illinois, Urbana-Champaign campus, “and thought, ‘What is the point?’”

In their essay in the New York Times — and a subsequent one Friday in the Los Angeles Times — UC Berkeley Law School Dean Erwin Chemerinsky and law and economics professor Aaron S. Edlin argued that California’s recall law was unconstitutional because the incumbent could be replaced with a candidate who received fewer votes. The scholars said that violated a federal constitutional principle that every voter should have an equal ability to influence an election result.

Judging by polls, the professors predicted with “virtual certainty that if Newsom is recalled, he will get far more votes — probably more than twice as many — as whoever would replace him.”

“This makes no sense and violates the most basic notions of democracy,” they argued in the Los Angeles Times.

But when a prominent constitutional lawyer representing Gov. Davis made this provocative assertion before the California Supreme Court in 2003, it failed, Amar noted. The court rejected the challenge and the equal protection argument.

The challenge sought to delay the election to allow Davis to appear with others in the second ballot question listing replacement candidates. That would have allowed Davis to remain governor if he obtained a plurality of the votes.

Amar said courts have long permitted rules that limit ballot access as long as they are reasonable and not overtly discriminatory.

“California’s voting process might be unwise or needlessly confusing, but it is not unconstitutional in the way critics have recently charged,” wrote Amar and University of Michigan constitutional law professor Evan Caminker this month on an online forum for legal commentary.

Still, the California Supreme Court’s rulings on several anti-recall lawsuits during the Davis recall did not create precedent. They came in the form of decisions on whether to take up the lawsuits. At the time, six of the seven justices were Republican appointees. Today five of the seven were appointed by Democrats.

Chemerinsky, in an interview, said he believed the law was unconstitutional but agreed that courts could decide that the recall proposal itself amounted to a separate election from the second question on the replacement candidates. That would likely defeat the equal protection challenge. Federal courts, he also noted, have been reluctant to involve themselves in elections.

In the L.A. Times essay, the UC Berkeley scholars argued the challenge should be brought directly to the California Supreme Court as soon as possible and the court should be asked to rule that if Newsom wins the plurality vote, he should be succeeded by the lieutenant governor until the end of the term.

That would be a bold move by the state’s highest court, whose justices face voters to be retained to 12-year terms.

Without court intervention, it would require a two-thirds vote of the Legislature or a signature campaign to place a measure on the ballot to change California’s recall law, which allows for the ouster of judges as well as legislators and governors.

That is because the recall right is enshrined in the state Constitution, placed there by voters in 1911 as a way to remove corrupt office holders.

Still, Chemerinsky said, some change must be made to “increase the difficulty” of holding recalls.

“Otherwise we are going to see a real increase in this,” he said. He noted that in the last two decades, a governor and a judge have been recalled.

During the Davis recall, the only lawsuit the California Supreme Court partially supported was a challenge of the requirements for potential replacement candidates to get on the ballot. The original constitutional requirement made it more difficult for people to be listed as candidates to replace a recalled incumbent, but the rules were substantially weakened by a later amendment and legislation.

It would not take a constitutional amendment to revise those requirements.

Then Chief Justice Ronald M. George wanted to delay the Davis recall election until the court reviewed a legal challenge of the requirements to be listed as a successor candidate.

“The chaos, confusion, and circus-like atmosphere that has characterized the current recall process undoubtedly has been brought about in large measure by the extremely low threshold …for potential candidates to qualify for inclusion on the ballot to succeed to the office of Governor,” George wrote in a dissent to the court’s refusal to take up the matter.

Then-Justice Carlos R. Moreno, at the time the court’s only Democratic appointee, agreed with George.

The Newsom recall is being challenged in federal court on equal protection grounds by Los Angeles civil rights lawyer Stephen Yagman, who unsuccessfully brought suit against the Davis recall too. Legal scholars said the suit was unlikely to succeed. “I think the suit is a loser in part because it was brought too late,” said UC Davis law school professor Christopher S. Elmendorf.

Amar, who spent much of his legal career in California, doubted that all the criticism of the recall process that Democrats and some legal scholars are now voicing will lead to actual reform after the election. The recall of Davis prompted similar calls for reform, but the recall law remains intact, he said.

“These things aren’t sexy, and they don’t have a constituency behind them,” Amar said. “You are not going to win an election by doing these really mundane, housekeeping things.”

Of the myriad court challenges during 2003, only one changed the law, Amar said. A federal judge struck down a requirement that voters had to vote on the recall question to be able to vote on the successor candidates.

But another challenge briefly put the Davis recall election in doubt. A three-judge panel of the U.S. 9th Circuit Court of Appeals ruled that the election had to be delayed because of error-prone punch-card voting machines in some places. Eight days later, a larger and more conservative 9th Circuit panel overturned that decision.

Amar believes the delay caused by the court actually hurt Davis and that Newsom would face a similar backlash from any court-ordered delay now.

“Those eight days cost Gray Davis the momentum he had going into that period,” Amar said. “No one knew whether there would be a recall election.”