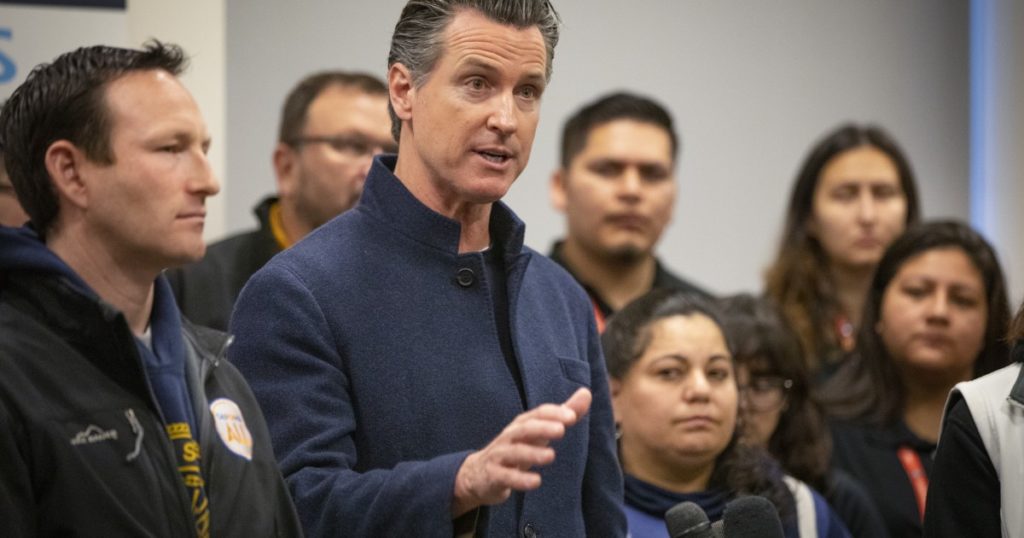 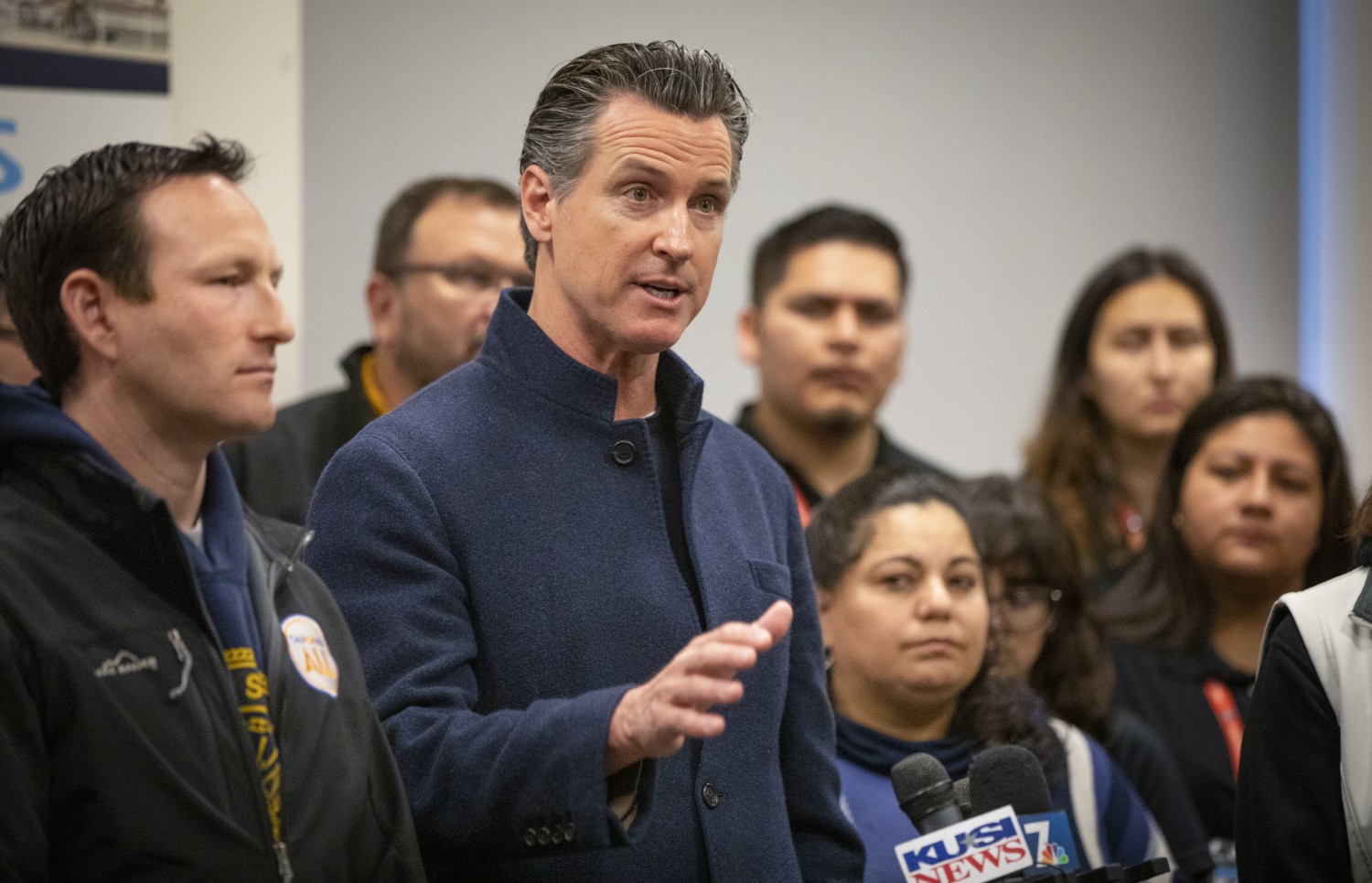 Halfway into his first term as governor and immersed in a historic struggle to slow the spread of COVID-19 in California, Gov. Gavin Newsom confirmed on Monday the departure of his chief of staff and the selection of a veteran Sacramento strategist to lead his administration.

Ann O’Leary, who was one of the first appointments made by Newsom after his 2018 election, sent the governor her resignation letter on Monday. Jim DeBoo, a former top advisor to members of the California Legislature who has more recently worked as a political consultant and lobbyist, will step in at the beginning of the year.

“Ann came to my Administration as a national leader in the fight for working families and a best-in-class crisis manager, and I am incredibly grateful for her partnership and service over the last two years,” Newsom said in a statement. “Jim DeBoo has a long legacy of service at all levels of government and, as we continue to carry our state through these unprecedented challenges, his ability to bring people together and drive the priorities most important to Californians will be pivotal.”

Newsom’s decision to turn to DeBoo marks a change in approach for the governor, whose hiring of O’Leary — a Washington, D.C., policy veteran with little California political experience — stoked speculation about his electoral ambitions beyond the state’s borders. But with the state facing public health and economic crises, DeBoo’s arrival could signal the beginnings of a closer relationship between Newsom and the Legislature as well as a wide array of interest groups.

DeBoo, 45, enters the governor’s office at the peak of the COVID-19 pandemic as demand for hospital care threatens to outstrip capacity, California begins the largest vaccine distribution effort in its history and the debate over school reopenings intensifies. The political waters are also turbulent for Newsom as a Republican-led recall campaign gathers steam in hopes of triggering a special election to oust him from office.

DeBoo started his career in the Legislature in 1998 and said he wants to return to government service to try to help California at one of the most difficult times in state history.

“When you’re watching something this difficult and people struggling and you think you can help, this is the exact time to step in,” DeBoo said in an interview with The Times. “I don’t want to regret not coming in and trying to assist the governor, his staff and the people of California.”

Democrats, labor union leaders and other interest groups were quick to commend the governor’s pick.

“He is as compassionate as he is competent — and he is extraordinarily competent,” said Senate President Pro Tem Toni Atkins (D-San Diego). “Jim will be an excellent addition for Gov. Newsom and an outstanding public servant for all of us in these trying times.”

DeBoo’s résumé includes work as a chief of staff to legislators and former Assembly Speaker John A. Pérez; as an advisor to former state Supt. of Public Instruction Jack O’Connell and as the statehouse representative for then-Los Angeles Mayor Antonio Villaraigosa.

But DeBoo’s quick transition from being a registered lobbyist into the governor’s inner circle has drawn scrutiny. Critics quickly called out his work as a registered lobbyist for the California Apartment Assn. and for the landlord-funded campaign opposing Proposition 21, a measure that would have expanded California’s rent control law on the 2020 ballot.

Newsom’s close network of friends and advisors has drawn attention after he attended a birthday dinner at the French Laundry in Napa Valley last month with lobbyists, including top advocates for the California Medical Assn. The hiring of DeBoo, who previously counted the doctors’ organization as a client, added to concerns about the interests of Newsom’s advisors.

“The question is, whose side is the governor on?” said Michael Weinstein, president of the AIDS Healthcare Foundation, which funded the campaign to pass Proposition 21. “I find it staggering that in a moment where there is such a spotlight on him and his privilege, whether it is the private school or the French laundry or the like, that he is so tone-deaf.”

DeBoo said his firm, DeBoo Communications, dropped all of its clients and he deregistered as a lobbyist earlier this month. While working for Newsom, he would only consider political work for the governor’s candidate campaigns or for the California Democratic Party, DeBoo said.

It’s not unusual for top aides to California governors to arrive with a history of working for major companies and interest groups. Then-Gov. Jerry Brown’s executive secretary, Nancy McFadden, had been a PG&E executive before leading Brown’s team. Then-Gov. Arnold Schwarzenegger’s first chief of staff, Patricia Clarey, worked on his campaigns and in top jobs at Chevron, Transamerica and Health Net.

DeBoo is widely known in Sacramento for his work in public affairs and on statewide initiatives.

He led a campaign in 2016 to increase the tax on tobacco products in California before passing a similar effort in Oregon this year. DeBoo was the campaign manager on a failed effort, championed by Newsom, to pass a $15-billion school bond in March, while working successfully against this fall’s Proposition 21.

In comparison to Newsom’s friend and advisor Jason Kinney, whose firm has reported receiving $10.9 million for lobbying from the governor’s inauguration in January 2019 through September of this year, DeBoo’s lobbying shop is substantially less active. DeBoo Communications received less than $900,000 in that same period.

His grasp of state politics could help fill a void in the governor’s office. O’Leary had served as a policy advisor to Hillary Clinton in the U.S. Senate and during Clinton’s 2016 presidential campaign and has a long record of interest in early childhood education and policies directed toward helping working families — issues she continued to champion as Newsom’s chief of staff with expansions of paid family leave and state’s earned income tax credit.

With O’Leary and Cabinet Secretary Ana Matosantos at the helm of his administration, the governor was able to land a deal on a historic rent cap, establish a $21-billion wildfire fund to shore up the state’s electrical utilities and sign legislation that tightened rules over police use of deadly force. His executive decision to halt the death penalty in California drew national headlines, as did his role as the first governor to issue a stay-at-home order when the pandemic hit.

“It’s been extraordinary,” O’Leary said. “I’ve learned a ton. I’ve felt really privileged to be at the table during this time, but the multiple crises have been really challenging for everyone, too.”

James Manyika, chairman of the McKinsey Global Institute who worked closely with O’Leary on the state’s Business and Jobs Recovery Taskforce, described her departure as “a loss” for the state.

“Her ability to arm wrestle and get these diverse interests to do the right thing on behalf of California was honestly quite remarkable,” Manyika said.

But a lack of Sacramento know-how came to define some of the administration’s struggles with lawmakers and outside interest groups. Public blunders over legislation on vaccines, tampon and diaper taxes, gas tax proceeds and the future of California’s high-speed rail project highlighted the inexperience with political forces at the state Capitol.

O’Leary’s resignation marks the latest departure in a governor’s office exodus at the midway point of Newsom’s first term. The governor’s communications director, Nathan Click, left in early December. His legislative affairs secretary, Anthony Williams, resigned in late August and a senior strategist, Daniel Zingale, left at the beginning of the year.

The governor’s office also announced a restructuring of the top roles in the administration on Monday.

DeBoo will not hold the title of chief of staff and will instead serve as executive secretary — the traditional designation given to a governor’s top aide and embraced by Brown during his first and second run in the governor’s office. His focus is to set the agenda and determine strategy for the administration, overseeing communications, external and intergovernmental affairs, and relations with the Legislature.

Matosantos will retain her job as Cabinet secretary, working with state agencies and departments. She’ll also oversee the legal and operations team in the governor’s office.

Amid all the turmoil in the state, the biggest challenge for the administration will be to focus on a return to normalcy, said Dana Williamson, a political consultant who has worked with DeBoo and once served as Cabinet secretary to Brown.

“They’ll have pulls from lots of people wanting different things, but Californians right now just want their lives back, and that has to be the priority,” she said.