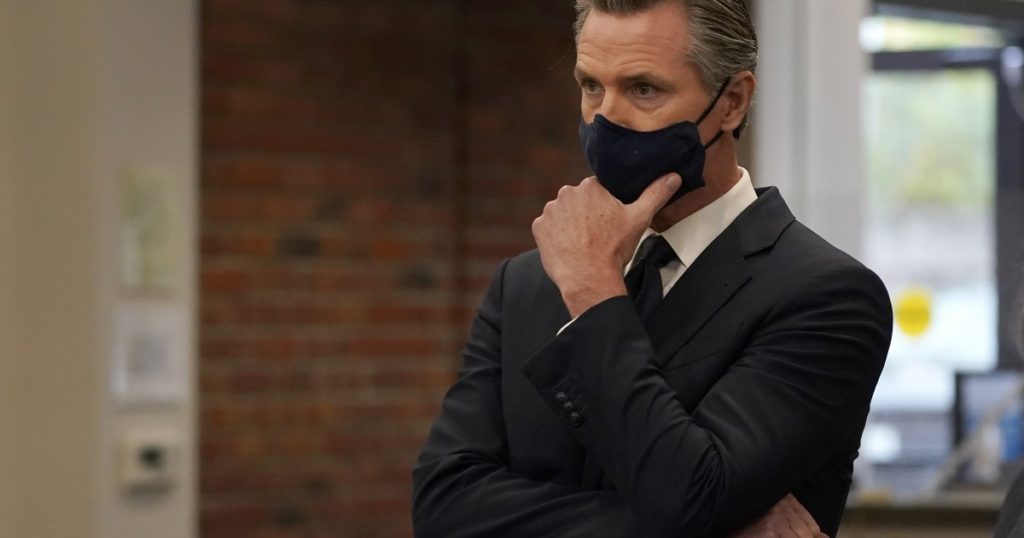 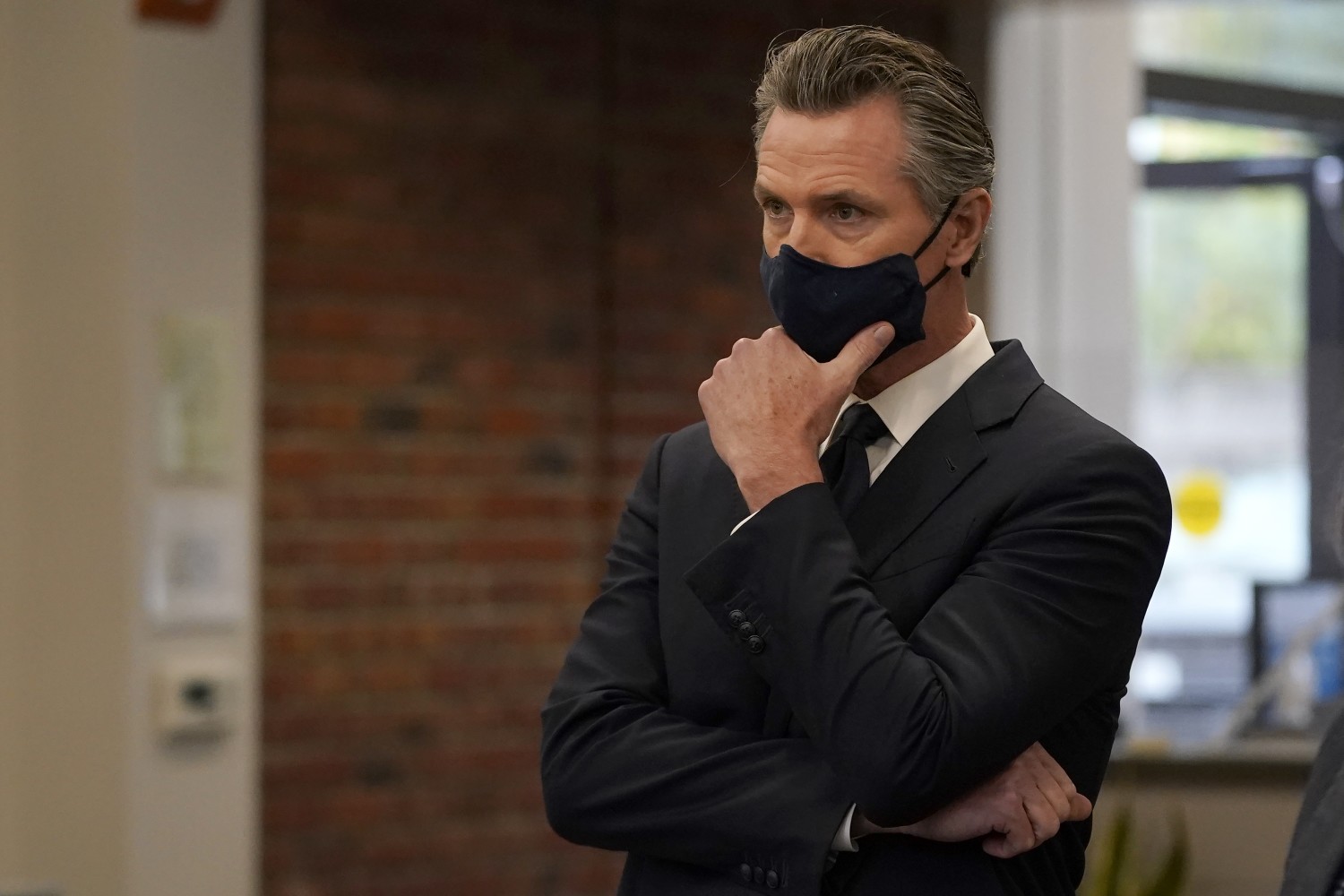 As the race to recall Gov. Gavin Newsom intensifies, his political survival is likely to hinge on one very simple question: Will California Democrats bother to vote in the Sept. 14 special election?

And with just seven weeks until voters cast their ballots, the anti-recall campaign’s strategy appears to be two-pronged: Make sure California Democrats know there’s a potentially competitive recall election on Sept. 14, and cast that election as an attack on the state’s progressive values rather than a referendum on Newsom himself.

Though Democrats outnumber Republicans nearly 2-to-1 in California voter registration, a new poll from the UC Berkeley Institute of Governmental Studies and co-sponsored by the Los Angeles Times shows that likely California voters are now almost evenly split over whether to remove the governor from office.

The survey also provides a stark illustration of the lack of interest in the recall among Newsom’s fellow Democrats compared to Republican voters, who are far more energized about the effort. It showed Newsom has a 15-percentage-point lead among all registered voters, but with those most likely to vote in the election, his lead fell to only three percentage points — just shy of the poll’s margin of error.

“Among people who usually vote in elections, this Republican recall wouldn’t have a snowball’s chance in Death Valley,” said senior Newsom campaign advisor Nathan Click. “But in a weird, once-in-a-generation, off-year election, we’ve always known that anything can happen and that Democrats — if they don’t vote — then there’s a real shot that the Republican takeover will be successful.”

A Republican has not won statewide office in California since the Bush era, but a low-turnout recall election with no prominent Democratic replacement candidate on the ballot could afford the GOP a rare opportunity to reverse that trend.

In early July, the Democrat-controlled state Legislature voted to revise election rules and effectively eliminate the required 30-day review of the recall’s estimated costs by legislators, accelerating the timeline for the election. Republicans argued the change was meant to give Newsom a political advantage, with polling at the time showing his job approval rating on the rise.

Since then, however, the highly transmissible Delta variant has raised the specter of potential new COVID-19 restrictions to stem the spread of the virus, and raging wildfires in Northern California have painted a grim picture of the hot, dry summer ahead.

Still, state Sen. Steve Glazer (D-Orinda), who served as a senior advisor to former Gov. Jerry Brown, said holding the recall election on Sept. 14 rather than weeks later shortened the window for replacement candidates to enter the race. No prominent Democrat jumped in, and conservative talk show host Larry Elder is currently topping the list of replacement candidates, but with just 18% support in the UC Berkeley poll. The California Republican Party will decide next weekend whether to endorse a Republican candidate in the race.

For months, Newsom’s anti-recall campaign has waged a well-orchestrated effort to attack the Republicans hoping to replace him, tapping labor, Democratic Party and civil rights leaders to condemn the recall as the work of pro-Trump extremists and highlight Newsom’s accomplishments in office. Vice President Kamala D. Harris, a longtime Newsom ally, recently said she will travel to California to campaign against the recall, and representatives for the anti-recall effort and the Democratic Party say other high-profile surrogates will soon be announced.

On Tuesday, environmental advocates and legislators attacked Elder, John Cox, Kevin Faulconer and other candidates on their records on climate change and improving air quality, as well as for accepting tens of thousands of dollars in political contributions from the oil industry. Gains made by the Newsom administration on reducing vehicle emissions and the state’s embrace of renewable energy are all at risk, they said. Click said Tuesday’s press conference was one of several that would focus on specific issues.

If “recall” is synonymous with “Republican,” then the overwhelmingly Democratic California electorate should defeat the effort at the ballot box, or so the conventional wisdom goes. But that game plan also demands three things of California Democrats — that they know when the election is, how to vote in it and actually fill out and return their ballots.

Voters, however, are creatures of habit, and the recall will be a special election, held during a month not typically associated with important votes. And with voters focused on other concerns, including wildfires, drought and the Delta variant, the recall election is unlikely to be the center of their attention. If Democratic voters think Newsom has no chance of being recalled, marking their ballots may not figure high on their to-do lists.

“The complacency index will be the No. 1 determinant of the outcome of the recall,” said Darry Sragow, a veteran Democratic strategist and publisher of the nonpartisan California Target Book election guide.

Political scientist Mindy Romero, director of USC’s Center for Inclusive Democracy, said Newsom must focus on Latino, Black and other voters of color who have strongly supported him in the past but, due to the unusual nature of this recall election, might not turn out at the same level as the 2020 presidential election.

“There is a base of voters of color, particularly Latino voters by sheer number here in California, that could greatly aid Newsom. But he’s going to have to reach out to them, and it’s going to be a challenge,” Romero said. “They are going to have to explain what this race is all about, and why it matters.”

The real campaign crunch will begin the week of Aug. 16, when the secretary of state begins mailing ballots to 22 million California voters. A law signed by Newsom last year requires ballots to be mailed to all registered voters for any election held in 2021, though people can choose to relinquish those ballots and participate in person.

California Labor Federation spokesperson Steve Smith said labor advocates plan to have hundreds, if not thousands, of canvassers out talking to voters in key cities that weekend. The door-to-door efforts will be part of what Click characterized as a “massive mobilization” operation, with the campaign and allies contacting Democrats to follow up about returning their ballots. According to Click, every registered Democrat in California with a phone number in their voter file will receive a text message telling them about the recall and asking them to vote no “to prevent the Republican takeover of California” along with other digital campaigns.

Newsom backers opposing the recall have far outraised those supporting it, giving the governor hefty campaign coffers to draw from.

But Mike Madrid, a GOP strategist who was part of the anti-Trump Lincoln Project during the 2020 presidential election, said Newsom’s campaign needs to move quickly to use the cash to its advantage.

“They’re going to have to start spending money now to partisanize this as a race against Trump,” Madrid said. “The governor also needs to really focus and emphasize that, even if you don’t like me, I’m better than the alternatives here.”

Sragow outlined what he considered to be the two nightmare scenarios for the California Democratic Party if Newsom loses the recall. In the first, a fringe candidate far outside the mainstream seizes victory. While such a figure would have little chance of later winning a full term in the 2022 gubernatorial election, that person would still be at the helm of the state that’s home to the world’s fifth-largest economy for more than a year.

Sragow’s other nightmare scenario for Democrats? Newsom loses the recall vote “and the candidate who emerges as our next governor is somebody who actually is a competent, attractive figure who may then go on to keep the governorship in the 2022 election.”