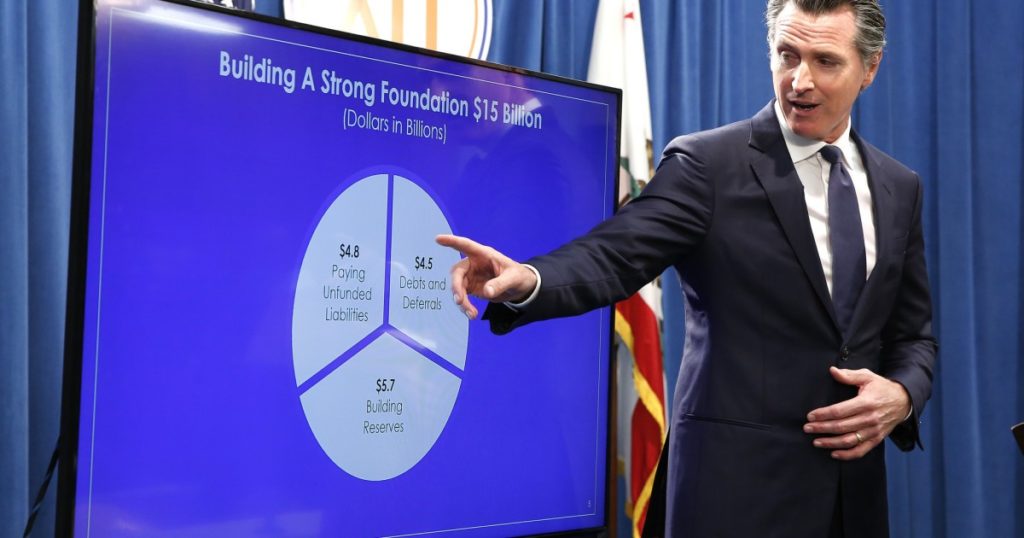 Gov. Gavin Newsom and legislative leaders can be thankful for one surprise holiday gift: a huge windfall of tax dollars.

But this is a one-time present. Sacramento Democrats should resist the temptation to quickly spend the billions on goodies.

Instead, they’d be wise to sock it away in a sort of Christmas fund to be tapped in future years when state government is expected to be operating in the red.

The lawmakers’ chief nonpartisan policy advisor, Legislative Analyst Gabriel Petek, recommends a prudent 50-50 approach: Use half for rebuilding cash reserves or paying off internal debt, and the other half for one-time expenditures, such as pandemic relief.

That makes sense if it can be done without the governor and legislators sneaking some bucks into pet projects.

This came after Newsom and the Legislature thought they were facing a horrific $54-billion pandemic-induced shortfall when they adopted the state’s $202-billion annual budget in June.

But Petek also warned of boom and bust. The state is on course to spend $17.5 billion more than it takes in by mid-2025, he cautioned.

Petek advised the Legislature to begin in January to fix the projected deficit spending. That may be wishful thinking.

“This could mean, for example, identifying ways to reduce spending or increase revenues in future years,” the analyst wrote in his fiscal outlook report.

“We strongly encourage the Legislature to engage in long-term planning and consider what needs to be done today to address the budget problem over the multiyear period.”

But long-range planning goes against the nature of term-limited legislators. They’re short-timers, limited to 12 years total as state lawmakers. Many won’t be around to face the consequences of deficit spending. That’s a problem with term limits.

Legislators tend to think about today, not tomorrow.

And as for deficit solutions, remember that Democrats hold supermajorities in both legislative houses. They allow legislators to pass virtually any bill imaginable — including a tax increase — if they’re united.

For a tax hike, Democratic unity would be hard to achieve among moderates who perpetually face reelection competition from Republicans. But if Democratic leaders face the dreaded prospect of cutting spending, it’s a good bet they’ll also try to balance this displeasure by raising taxes.

Petek told me he “won’t harp too much” on the Legislature about finding a solution next year to long-range deficit spending.

“We’re in the middle of a pandemic,” he said. “There’s high unemployment. I don’t expect them to allocate a lot of political capital to solve a future problem, but it would be prudent to start making plans.”

How did the $26-billion windfall develop?

The state’s economy “experienced a quicker rebound than expected,” Petek’s report reads. “While negative economic consequences of the pandemic have been severe, they do not appear to have been as catastrophic from a fiscal standpoint as the budget anticipated.

“But the recovery has been uneven. Many low-income Californians remain out of work while most high-income workers have been spared.”

“This was an atypical downturn,” the analyst told me.

Basically, technology saved the jobs of many people. Employees who work online and can do their jobs at home kept getting paychecks. That wouldn’t have happened before Wi-Fi, smartphones, the internet and Zoom.

These people tended to be college-educated, higher-income workers who are the main targets of California’s very progressive personal income tax system.

In October, income tax revenue was 40% higher than what had been projected in June, according to the state Department of Finance. All state taxes are up 22% over projections for the fiscal year that began July 1.

The stock market unexpectedly became robust, recently hitting record levels, Petek notes. That provides the state with hefty taxes on capital gains — unlike in a normal recession when that revenue stream slows to a trickle.

And the federal government kicked in $15 billion for the state, cities, counties and the unemployed, the Finance Department says. That was a big boost.

“Workers on the lower end bore the disproportionate brunt of the pandemic,” Petek said. “They tended to be the front-line workers, the service workers who interact with the public.”

Many of their restaurants, shops and offices closed temporarily or went out of business.

“Workers earning less than $20 per hour make up the vast majority of job losses,” the analyst’s report reads. “In contrast, employment among workers earning over $60 an hour remains at pre-pandemic levels.”

California unemployment in October dipped to 9.3% from 11% in September.

The Newsom administration basically “agrees with that trajectory,” Palmer said.

Newsom and the Legislature should make New Year’s resolutions to resist any new permanent spending for the indefinite future. Unfortunately, that resolution is almost certain to quickly be broken.