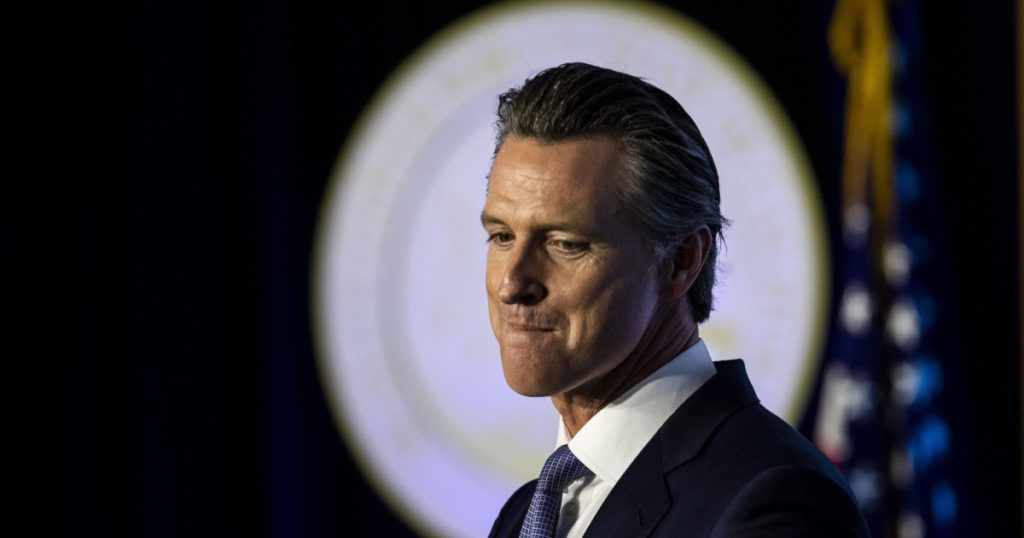 Gov. Gavin Newsom apologized Monday for visiting a Napa Valley restaurant with people from other households, saying his behavior contradicted the spirit of the safety guidelines and precautions he has asked Californians to adhere to during the COVID-19 pandemic.

“I want to apologize to you because I need to preach and practice, not just preach and not practice, and I’ve done my best to do that,” Newsom said. “We’re all human. We all fall short sometimes.”

Newsom acknowledged that the faux pas may result in a loss of his moral authority on the coronavirus as California experiences a major surge in cases. The governor discussed his own behavior on the same day that he announced a reversal of his reopening plans and ordered 28 counties to return to the purple tier — 94% of Californians will be under the state’s most restrictive guidelines as of Tuesday.

The governor has been criticized in recent days following news of his attendance at the dinner party and that his children are back in school while millions of California schoolchildren and their families juggle distance learning with full-time jobs.

San Diego Mayor Kevin Faulconer, the governor’s most prominent GOP critic who has been urged by some in his party to challenge Newsom in 2022, condemed the governor in a Tweet last week, suggesting that he has been living a different life during the pandemic than his constituents.

“His kids can learn in person. But yours can’t,” Faulconer wrote. “He can celebrate birthday parties. But you can’t. He can dine on a $350 meal at one of California’s fanciest restaurants during the worst recession in generations. But you definitely can’t. Can you believe this? I can’t.”

His kids can learn in person. But yours can’t.

He can celebrate birthday parties. But you can’t.

He can dine on a $350 meal at one California’s fanciest restaurants during the worst recession in generations. But you definitely can’t.

Can you believe this? I can’t. https://t.co/lmRBWh9rpS

Newsom and his wife, Jennifer Siebel Newsom, attended a birthday party for his political advisor Jason Kinney, a registered lobbyist, at the Michelin-starred French Laundry restaurant in Yountville on Nov. 6, first reported by the San Francisco Chronicle. The governor visited the restaurant with more than three other households at the same time that he and his administration were warning Californians not to gather with their own families during Thanksgiving.

Newsom said Monday that he’s visited restaurants three times since February, twice with his wife and once alone.

“As soon as I sat down at the larger table I realized it was a little larger group than I had anticipated and I made a bad mistake,” Newsom said of the dinner at the French Laundry. “Instead of sitting down, I should have stood up and walked back, got in my car and drove back to my house.”

Last month, the governor said his children were transitioning back to classroom learning at their Sacramento-area private school.

“So they’re phasing back into school and we are phasing out of our very challenging distance learning that we’ve been doing, so many parents are doing, up and down the state,” Newsom said on Oct. 30. “We absolutely believe that the social emotional learning that occurs in the classroom is the best place for our kids — certainly the best place for their parents as well — and so it is absolutely incumbent to do everything in our power to provide support to our districts, so they can safely reopen.”

Statewide, millions of students are continuing their studies through distance learning. Most students in Los Angeles County, which has been stuck in the most restrictive purple tier since the state updated its reopening guidelines in September, are still learning from home.

The new wave of criticism isn’t the first time Newsom has faced questions about his lifestyle. During the 2018 governor’s race, Newsom’s opponents cast him as a wealthy businessman out of touch with everyday Californians.

Newsom has often talked of his beginnings as a small businessman whose success began with a small San Francisco wine shop and grew into a multimillion-dollar hospitality enterprise. He also spoke of how he and his sister were raised mainly by their mother, Tessa, a bookkeeper and secretary who sometimes worked more than one job to make ends meet.

But Newsom also benefited from his long-standing business and personal ties to the family of the late oil tycoon J. Paul Getty. His late father, William A. Newsom III, was once the administrator of the Getty trusts.

The governor and his family live in a $3.7-million, six-bedroom home in Fair Oaks, near the banks of the American River.