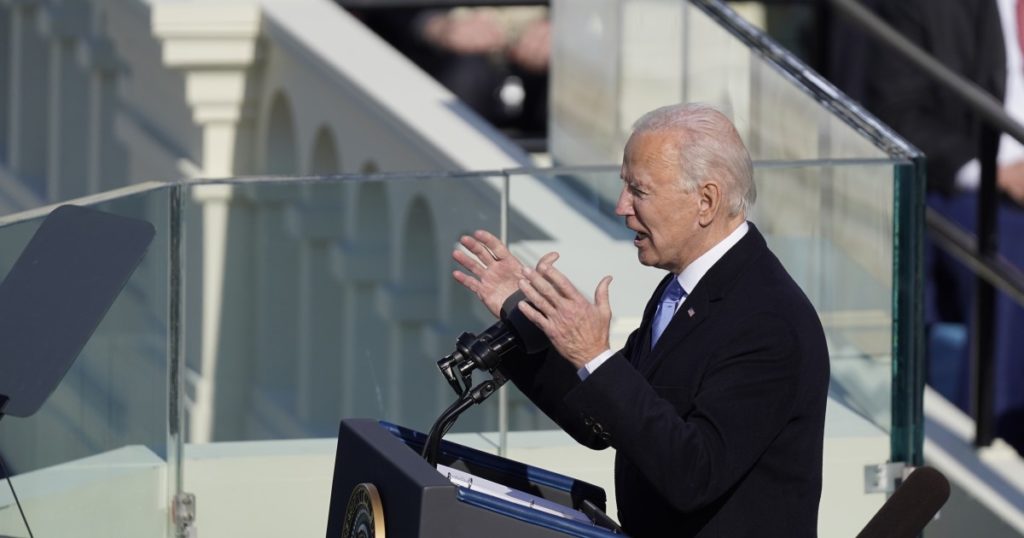 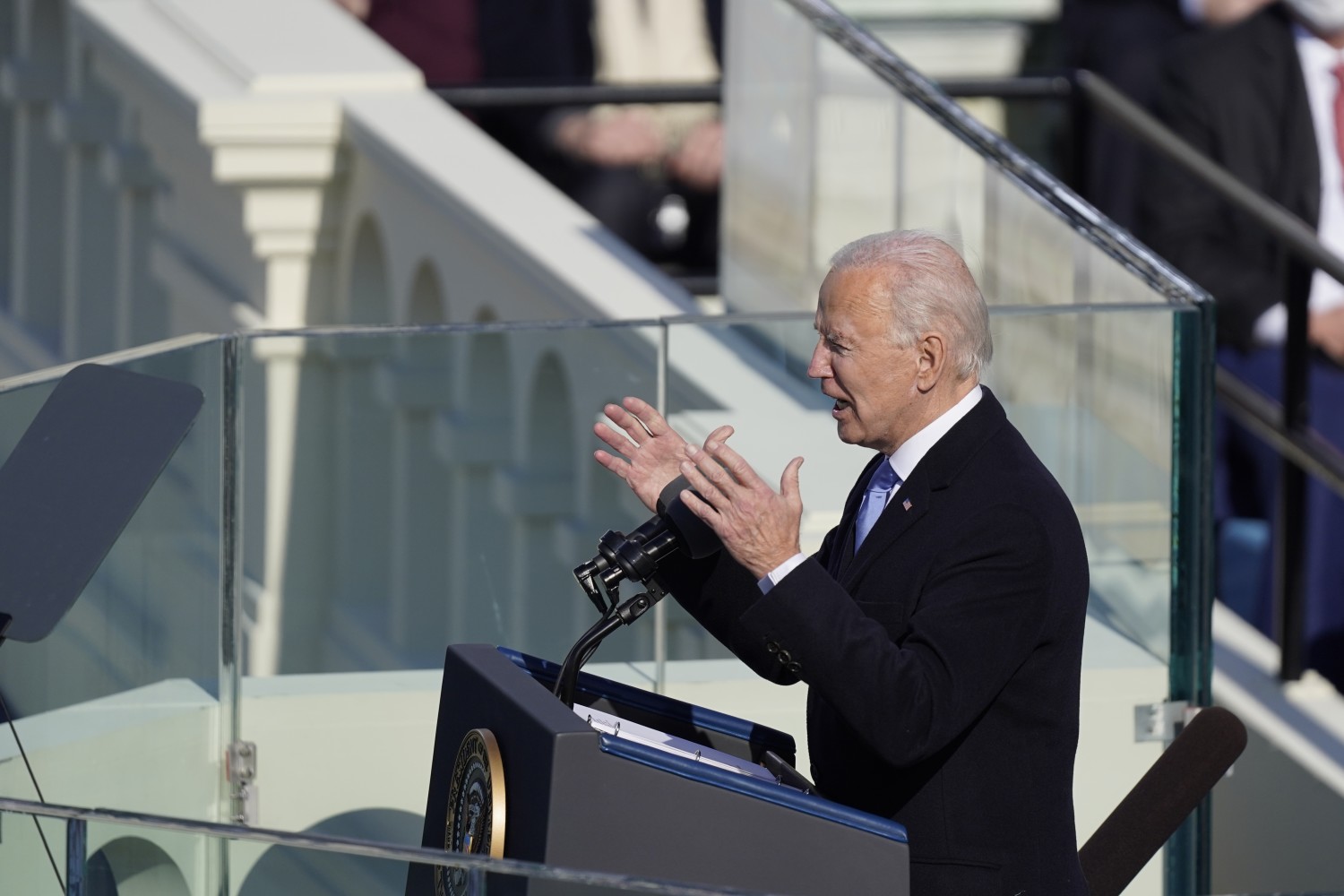 There was never a doubt President Biden would call for unity at his swearing-in — the declaration that “we are the United States of America” peppered his speeches throughout the long presidential campaign.

“Unity” appeared a dozen times in Wednesday’s 21-minute speech and as the topic of a proclamation for a Day of Unity that the new president signed shortly after he took the oath.

But at an inauguration surrounded by high fences and troops, amid unprecedented levels of security to protect against potential attack by supporters of his defeated predecessor, in the shadow of a Capitol still marred by a deadly riot just two weeks ago, Biden this time coupled those calls with something sterner:

“The recent weeks and months have taught us a painful lesson. There is truth and there are lies — lies told for power and profit,” he said.

“Each of us has a duty and a responsibility,” he added, “to defend the truth and defeat the lies.”

Biden comes to office facing multiple crises of a severity few presidents have encountered so early in their tenures and with only narrow congressional majorities to back him. His inaugural address offered clues to how he will attempt to build a mandate for carrying out his policies — reaching out to those Americans who did not vote for him, but also drawing a bright line that seeks to separate at least some of those voters from President Trump.

Biden is “temperamentally a man of healing,” said Princeton University historian Sean Wilentz. His ability to express empathy — on display throughout the campaign and highlighted Tuesday with his memorial to the 400,000 Americans who have died of COVID-19 — created a contrast to Trump that helped propel him to the White House.

But a desire to heal “can lead you down a dangerous path” if that’s all a president offers, Wilentz said, especially in the face of a “threat to American democracy.” As President Lincoln understood, “there really cannot be reconciliation short of justice and accountability,” he said.

In a first for any inaugural address, Biden openly named “white supremacy” as a threat, along with “domestic terrorism that we must confront and we will defeat.” He decried the “harsh, ugly reality that racism, nativism, fear, demonization have long torn us apart.”

Biden called for lowering the temperature of the national debate, saying that “politics doesn’t have to be a raging fire, destroying everything in its path” — a line that repudiated the last four years, but may also have served as a warning to the more confrontational voices on the left of his own party.

But he coupled that with saying that “we must reject the culture in which facts themselves are manipulated and even manufactured.”

At its worst, “unity” can be a cliché or — as some Trump supporters in Congress have used the word since the attack on the Capitol — an excuse to ignore accountability.

That wasn’t Biden’s meaning, said Dylan Loewe, a former Biden speechwriter. The president was not arguing that Americans should unify at the price of putting aside principles. A key line in the speech, Loewe said, was Biden’s declaration that at crucial moments in American history, “enough of us, enough of us have come together to carry all of us forward.”

The speech aimed to “add some content to what ‘unity’ means,” said Julia Azari, a political scientist at Marquette University in Milwaukee. Biden used the term to mean a sense of shared national purpose and then “described who lies outside that,” she said.

Defining unity in that manner “can include a whole lot of people,” she said, but adds the requirement of “a shared set of values.”

“That means you can’t have a seat at the bargaining table and use lies. Lies are anti-democratic; white nationalism is anti-democratic” she said. Biden’s speech “drew a boundary around unity” and invited listeners to think about “what the borders are.”

Biden’s tone struck a chord with many of his supporters.

“I feel healed,” said Deborah Driver, a 67-year-old middle school teacher, who had volunteered for Biden’s campaign and watched the ceremony at home in Fort Washington, Md., while writing lesson plans.

“I just have a sense that the forces of good have been trying to coalesce,” Driver said Wednesday. “Joe’s tone, his sincerity … it was pitch perfect for the pain and anger that a lot of people in this country feel.”

“It’s our democracy,” Driver said, emphasizing the word “our.”

Freddie Jenkins, 69, who lives in a historically Black community outside Charleston, S.C., said he’s ready to see the country move past Trump’s inflammatory leadership and the insurrection his supporters staged. He seemed confident Biden could help.

“It’s a form of war when you start doing an insurrection, but it will never happen again,” said Jenkins, who has served in the Army Reserve and the National Guard. “I believe that these QAnon people, these hate groups and neo-Nazis are going back into hiding for a long time before they come back.”

Beyond his own supporters, Biden appeared to be reaching out to at least some Republicans by drawing a line that would “carve out Trump and Trumpism as an exception,” said UC Berkeley political science professor Eric Schickler.

Biden’s ability to get his program through Congress will depend to a large extent on whether Republicans unite in opposition to him, as they largely did with President Obama. He takes office, however, with the opposition badly split because of Trump. That creates a potential opening for the new president — one which he and his party already benefited from in winning two Senate seats in runoff elections in Georgia earlier this month.

With Trump hoping to remain a major force in the party, the speech served to politely, but forcefully widen that division in the opposition’s ranks.

Biden “didn’t draw divisive lines” by dwelling on specifics of policy, Schickler noted. Instead, the implied message was that “we can disagree about policy, but share a broad set of values.”

That message played off the remarks that Sen. Mitch McConnell (R-Ky.), now the Senate Minority Leader, made Tuesday in which he said, referring to the people who attacked the Capitol on Jan. 6, that “the mob was fed lies” and “were provoked by the president and other powerful people.”

“While he works to unite the country, he’s going to go to war with the notion of alternative facts,” said Rob Stutzman, a Sacramento-based Republican consultant who has been a critic of Trump’s.

The speech signaled “an effort to gently bring as many Americans as possible to the idea of common truths,” Stutzman said, not by shaming them or “demanding that they admit they were wrong, but inviting them to a common shared future.”

That message may also be “very well received by a lot of Republicans,” said GOP consultant Alex Conant, a former top aide to Sen. Marco Rubio (R-Fla.). “It’s not just Democrats who are tired of the divisiveness.”

That said, Conant noted, Biden had the advantage on Inauguration Day of not having to dwell too much on specifics. “The inaugural address is typically the easiest part of being president,” he said.

Four years ago, Trump delivered a very different speech, one which drew a sharp division between “the people” — Trump’s code for his largely white, conservative supporters — and “the establishment.” Over the four years that followed, Trump repeatedly showed that he defined “the people” as largely excluding residents of Democratic cities and states — governing almost exclusively as the leader of his political base rather than the nation as a whole.

That divisive approach, which brought the nation’s institutions near the breaking point, reached its peak intensity as Trump sought to overturn the election, culminating in the assault on the Capitol two weeks ago.

Whether Biden’s appeal to national unity can succeed in repairing the breach and allow him to reach past the nation’s deep partisan divide won’t be clear for months to come. Wednesday’s speech, however, lighted forward the path he hopes to take.