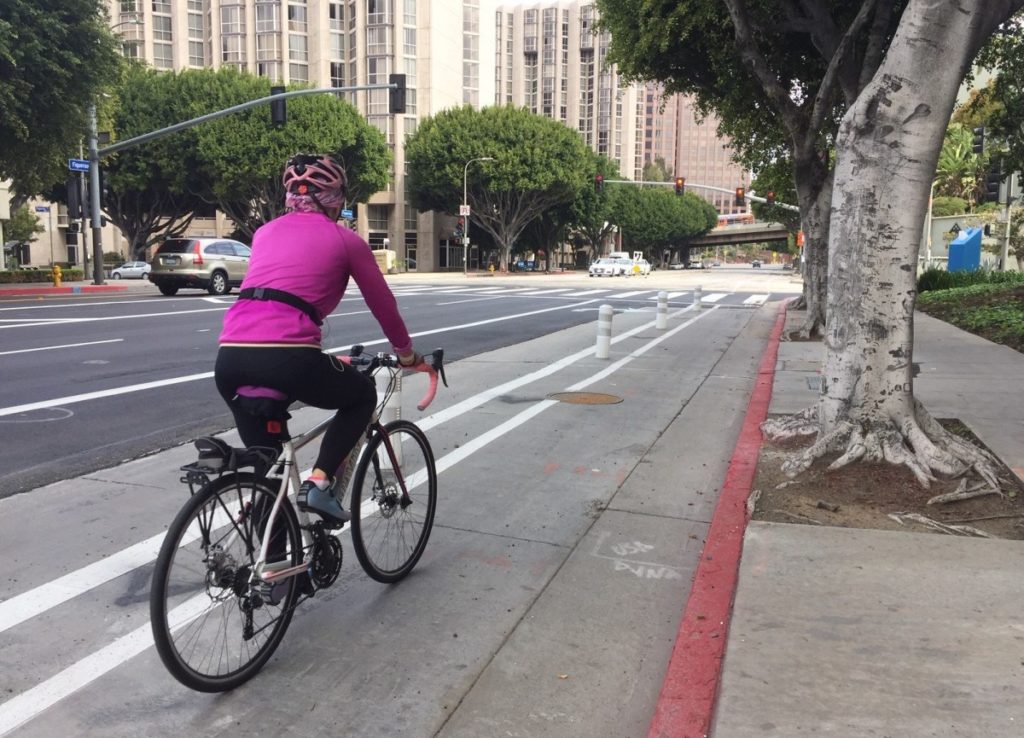 The new improvements are located on the 0.6-mile stretch of Figueroa between Wilshire Boulevard and 2nd Street in downtown Los Angeles. The location is immediately north of the MyFigueroa protected bike lane. For all but one block of this project (from Wilshire to 3rd Street), Figueroa is one-way northbound, so the protected lane is one-way northbound.

The lane improvements had been announced earlier by LADOT, via a Spectrum News article. They represent recently-seated City Councilmember Kevin de León making good on a campaign pledge in support of extending MyFigueroa’s bikeway.

The nearly-completed project includes plastic bollards, green pavement in some conflict areas, and bicycle signals at some intersections.

The new protection is definitely an improvement, but this part of Figueroa Street still feels overly large. It remains a six-car-lane one-way street with large volumes of drivers coming on and off the 110 Freeway at ramps on 3rd, 4th, 5th, and 6th Streets. At 3rd Street, which has both on- and off-ramps for the 110, Figueroa can feel like it is a big freeway ramp during rush hour, feeding the 110 from three directions.

The newly protected bikeway improves travel northbound, but it remains somewhat treacherous for cyclists to continue southbound below 2nd Street. In theory, cyclists should get on the parallel southbound Flower Street, but there is no connection where the Second Street tunnel goes underneath Flower, so southbound cyclists (from either 2nd or Figueroa) end up riding on the sidewalk, or going the wrong way in the now-protected northbound lane. A future project could install a protected two-way protected bikeway between 2nd and 3rd, and then have southbound cyclists go east on 3rd (via the existing fairly low-traffic frontage road) to Flower. Perhaps that should have been part of the current project?