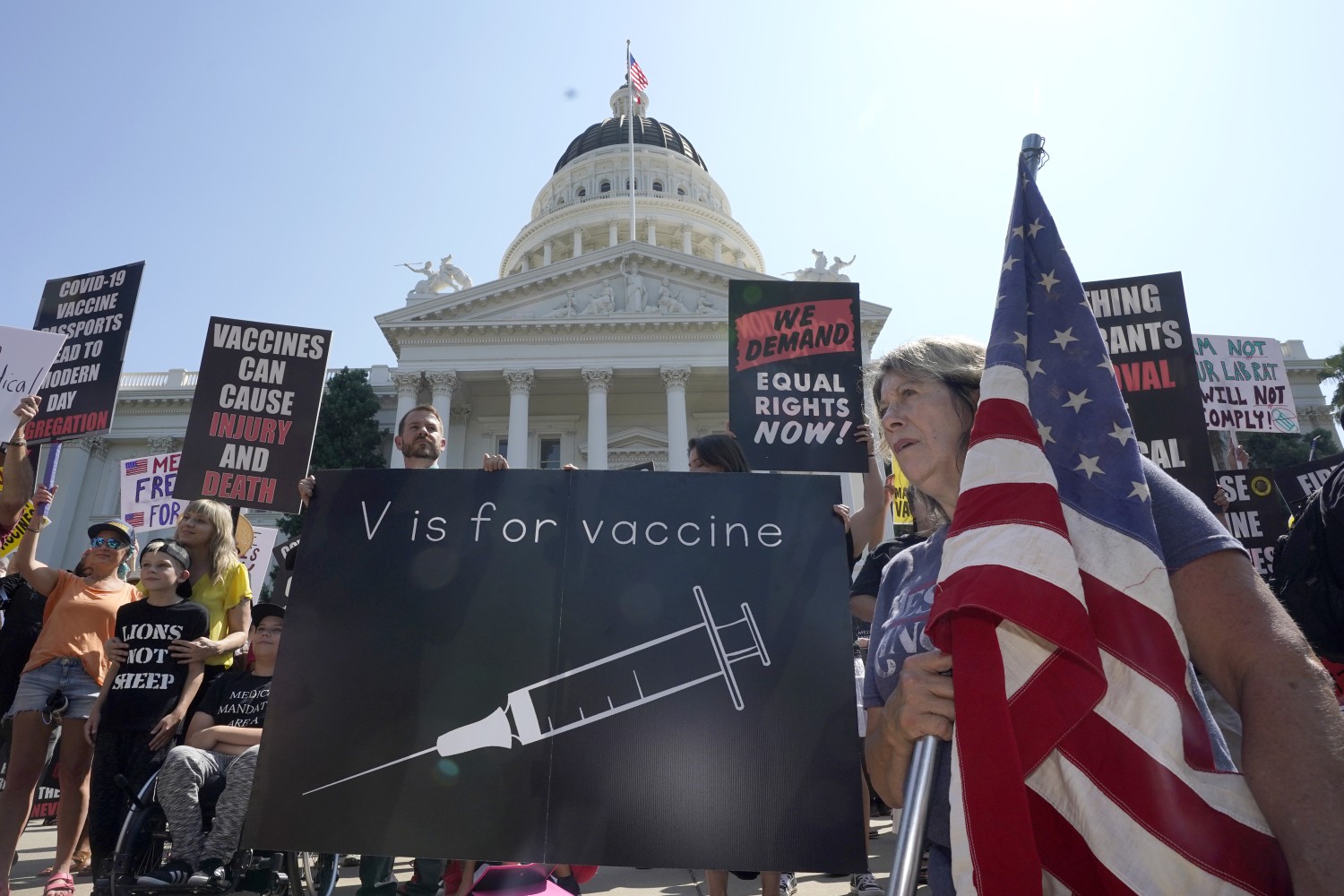 A drumbeat of chants criticizing vaccine and mask mandates seeped through the walls and into the unusually sparse hallways on Wednesday at the state Capitol, where lawmakers were wrapping up the final week of their legislative session without the bills that hundreds came to Sacramento to protest.

A late push by Assemblyman Evan Low (D-San Jose) to create a new workplace vaccine requirement failed to come together before a legislative deadline Tuesday evening. Another proposal by Assemblywoman Buffy Wicks (D-Oakland), which fell apart last week, would have created sweeping new vaccine mandates in the workplace and to enter businesses.

The language of both proposals were never officially placed into bills, though drafts were leaked as Democratic lawmakers attempted to bring business and labor groups on board.

“It’s unfortunate and very frustrating we couldn’t get this done,” Low said in an interview Wednesday. “We ran out of time. These things take time.”

Lawmakers behind the proposals say mandates would improve vaccination rates and help lessen the effects of variants spreading through California. Cases of COVID-19 have shown signs of slowing in many parts of the state, with decreasing rates in Southern California and the San Francisco Bay Area, but rural areas in Northern California and the Central Valley are struggling with much higher hospitalization rates, according to a Los Angeles Times data analysis.

Experts have cautioned that the pandemic could still worsen if more people are not vaccinated, particularly with children and staff back in schools and upcoming holiday gatherings and travel.

Low said he reached a deal with the California Labor Federation and the California Chamber of Commerce on Tuesday, appearing to clear the way for the COVID-19 workplace proposal to be amended into a bill and put to a vote in the Legislature this week. That deal included a provision that businesses wanted in state law stating that employers can require workers to be vaccinated against COVID-19, something currently allowed under federal guidance with exemptions for religious or medical reasons. Businesses hoped to eliminate any ambiguity about their right to mandate vaccines in order to shield them from potential lawsuits.

To earn support from the California Labor Federation, Low’s proposal also called for extending emergency paid sick leave of up to 40 hours, which workers could use to get vaccinated, recover from vaccine-related symptoms or care for a child who tests positive for COVID-19. The additional paid leave, although limited in how it could be used, meant the California Chamber of Commerce would take a neutral position on the proposal because of its potential burden to employers, said Jen Barrera, the group’s executive vice president.

Barrera said the proposal was needed because it could have helped improve vaccination rates and put employers at ease if they chose to require vaccinations.

“In the end, it never fully came together,” said Steve Smith of the California Labor Federation. “Procedural hurdles and lack of time were the main factors. We’ll keep focus on looking at all the options for extending the paid sick leave deadline.”

Another more far-reaching proposal was dropped last week after Wicks said she needed more time to craft “the strongest bill possible.” Drafts of the bill language called for residents to show proof that they are vaccinated to enter many indoor businesses and would have required public and private sector workers to be fully vaccinated or regularly tested.

Wicks said she might pursue the legislation in January when the Legislature returns. Gov. Gavin Newsom, who praised Wicks’ efforts, said he would “consider subsequent actions” to impose additional vaccine mandates if needed to help protect Californians from new coronavirus variants.

Many protesters gathered outside the state Capitol on Wednesday carried signs that decried vaccines and mandates while also supporting the recall against Newsom. Vaccine mandates have been a lightning rod in the gubernatorial recall election, scheduled for Sept. 14. Candidates looking to replace Newsom have criticized the two legislative proposals as well as mandates from the governor’s office.

Under the Newsom administration, the state has ordered healthcare workers to be fully vaccinated and required school employees and state workers to get vaccinated or submit to regular COVID-19 tests.

“I just don’t think it should be mandated,” said Erica Muhler, a phlebotomist from Grass Valley in Nevada County, who protested outside the state Capitol with a sign saying she was fired for not being vaccinated. “They are pushing vaccines through too fast.”

Nearby, a woman announced plans over a loudspeaker for a protest march around the Capitol, which drew cheers on a day when the heat climbed past 100 degrees.

Low, whose proposal many protesters came to fight, said he supported their decision to rally against his efforts but added that the size of the crowd can be deceiving when attempting to use it as a sign of general resistance among residents in the state. More than 80% of eligible Californians have received at least one dose of COVID-19 vaccine, which means the overwhelming majority of people in the state believe in vaccines, Low said.

“This is indisputable data,” Low said. “This isn’t about politics. It’s about saving lives. I welcome debate, but based on facts and science.”

In previous years, legislation mandating vaccines prompted disruptive protests at the state Capitol, with prior bills aimed at eliminating medically unnecessary exemptions to childhood immunizations required to attend school. In 2019, near-constant protests against school vaccine bills in the Capitol resulted in arrests after hearings were temporarily shut down. On the final day of the legislative session, a woman protesting against the legislation threw blood onto the Senate floor.

Sen. Richard Pan (D-Sacramento), who authored the most recent childhood vaccine laws, introduced a bill this year that would make it a crime to knowingly obstruct a vaccination site after Dodger Stadium was temporarily shut down in January by protesters and additional disruptions took place throughout the country. Pan’s bill passed the Legislature Wednesday and is headed to Newsom for consideration, despite some criticism that it infringes on free speech rights.

Pan pointed to an incident this week in Colorado in which people at mobile vaccination sites were harassed and threatened by passing motorists to the point that the state’s public health agency temporarily halted services.

“I think people have had enough with those who refuse to protect the health and safety of the community,” Pan said.