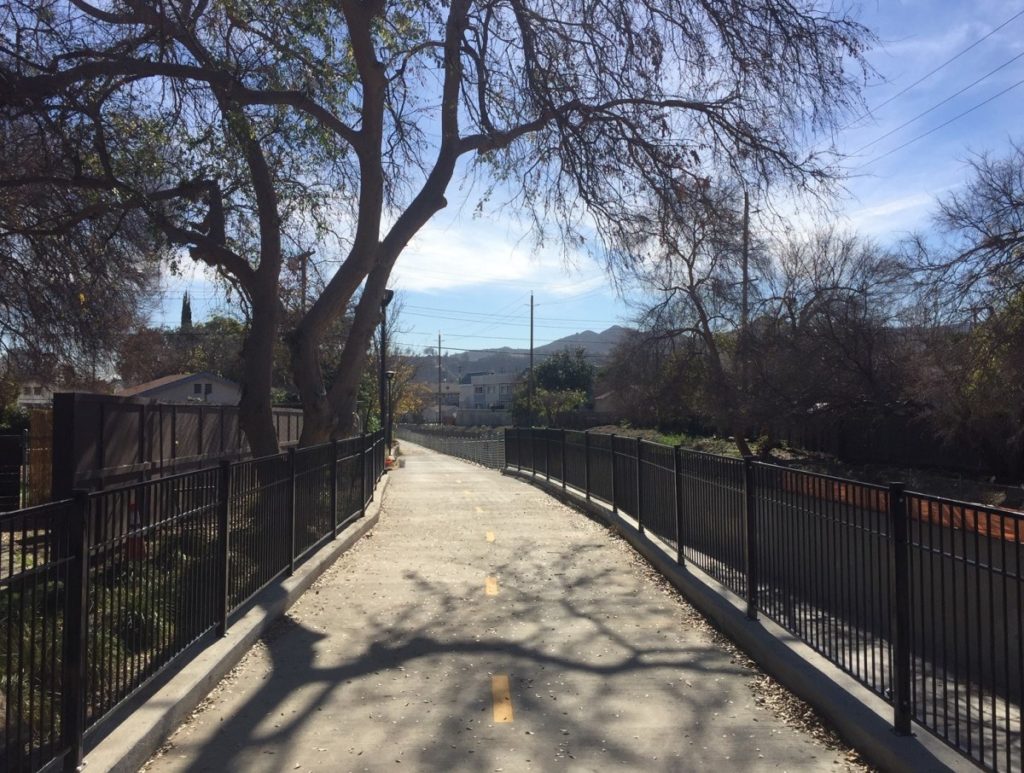 It’s not open yet, but construction is all but complete on the city of Burbank’s new bike/walk path along the Burbank Western Wash. Burbank’s Assistant Community Development Director David Kriske states that the path is expected to be open by February 1. “While most of the construction is done, we are still working on some finishing items including landscaping, sign and traffic signal work, hand rail installation, and cleanup,” he says.

Burbank bike commuter Mary Dickson recalled the many year long process and multiple meetings to get the project built. “Advocates distributed tri-lingual (English, Spanish and Armenian) fliers in the blocks around the project,” encouraging people to let the City Council know they supported building the path; “the response was great.” Dickson states that “one or two people who didn’t like the project spoke up” and everyone else made their “positive position heard” resulting in unanimous City Council approval.

The new 0.75-mile long path – officially called phase two of the Burbank Wash Bikeway – extends along the Burbank Western Wash, from Olive Avenue to Alameda Avenue. The path offers new mobility and recreation opportunities for a neighborhood of primarily multi-story apartment buildings – one of the more population-dense parts of the city of Burbank.

The northern end of the project is at the Downtown Burbank Metrolink Station. The path offers a needed first/last mile connection to Metrolink trains as well as many of the area’s bus lines.

The southern end of the project connects to the existing quarter-mile phase one of the wash path, which opened in 2011.

The existing path ends at Victory Boulevard, the border between the cities of Burbank and Glendale.

According to Kriske, the new path was initially estimated to cost just under $4.4 million, but ended up costing $8.7 million.

The biggest factor in the cost increase was meeting requirements of the U.S. Army Corps of Engineers, the federal agency that oversees flood minimization infrastructure, including the concrete reinforced walls of the Burbank Western Wash. The USACE did not allow the city to construct basic earth-filled ramps and retaining walls along the channel, as they would increase the load on the wash’s concrete channel walls. Instead USACE insisted on elevated “boardwalks” where the path ramps up and down.

USACE’s boardwalk requirement also made it more difficult for contractors to access the site. All that, along with an inflated Southern California construction market, doubled the project budget.

The State Urban Greening grant funded California native planting on both sides of the wash channel.

Near the intersection of Flower Street and the Olive Avenue frontage road (just south of the Metrolink station), the facility includes a short path located where a sidewalk would go. From there, the path crosses the channel over a repurposed rail freight spur bridge that the city purchased from the adjoining Borrmann Steels business.

The project brings cyclists and pedestrians up close to several historic bridges built in the 1940s. These Burbank historic bridges are pretty unassuming and modest (and dwarfed by contemporary bridges that now span the wash, railroad tracks, and 5 Freeway), but they do have concrete railing; a few of them feature pleasant curved railings.

Just below the intersection of Lake Street and Providencia Avenue, the path accesses Burbank’s mini-park commemorating the historic compass point sycamores that used to mark the mid-point between the Los Angeles Pueblo and the San Fernando Mission.

Fairly quiet crossings at Verdugo Avenue and at Lake/Providencia are simply crosswalks with some signage.

At Alameda Avenue (the south end of the new path) cyclists and pedestrians must cross four lanes of traffic to continue to the already-completed section. The crossing at Alameda Avenue is a signalized crosswalk. Per Kriske, it features the city’s first bicycle signal heads.

Walk Bike Burbank chair Mike Hollis praised the new wash path as “great” and “useful,” but expressed some frustration that “its true value won’t really be appreciated until the city completes the other missing segments that connect to the Burbank-Chandler path. Per Kriske, the city is in the planning stage of extending Burbank-Chandler east to the Metrolink Station, where riders could continue on the wash path.

Kriske also noted that the city of Glendale has MSP funding to extend the bikeway further south to connect to the L.A. River paths at the top of Griffith Park. But Kriske mentioned that the “Glendale alignment likely won’t be along the Channel” because “adjoining properties have built over the right of way.” Instead that section is anticipated to be a combination of protected and unprotected on-street bike lanes.