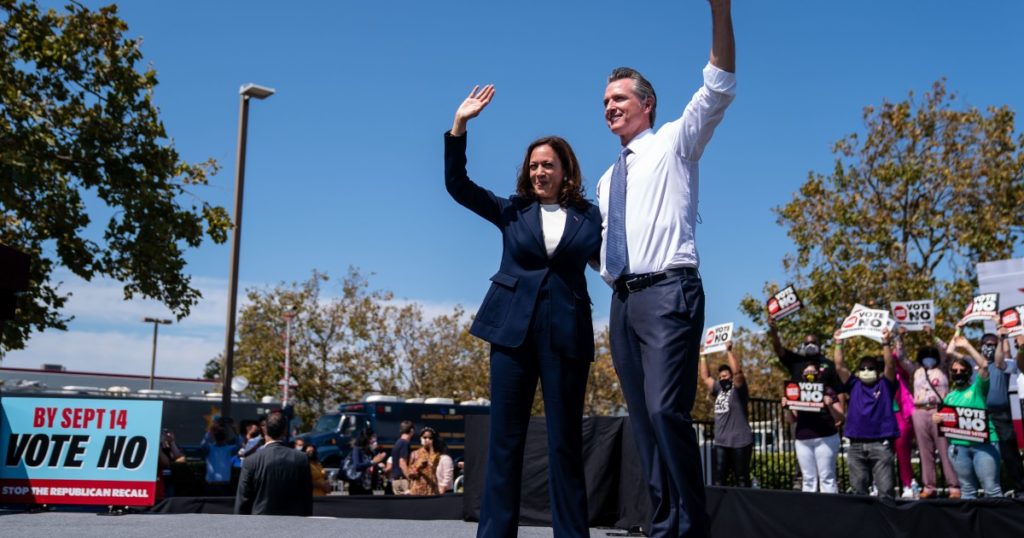 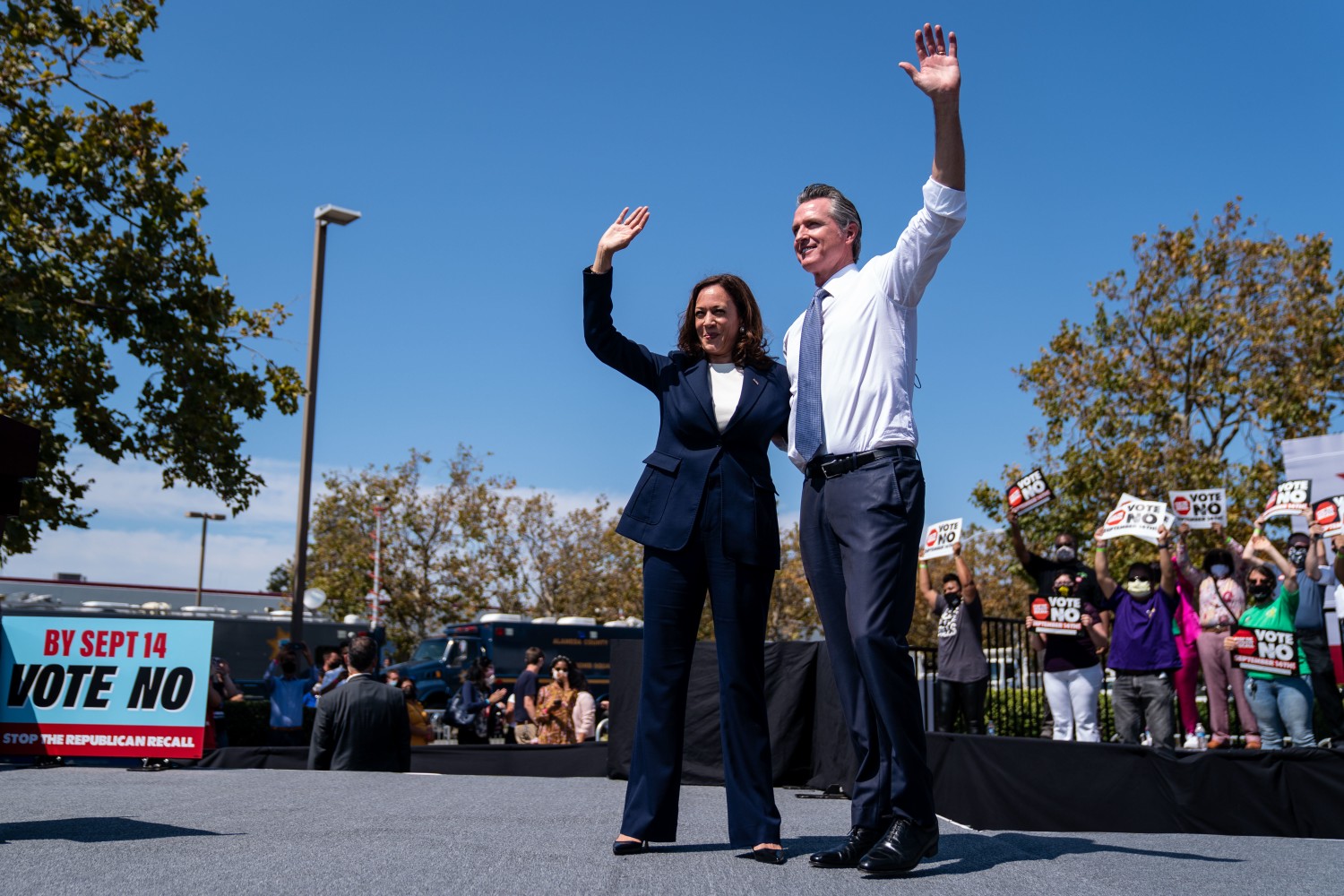 Momentum has turned strongly against the effort to recall Gov. Gavin Newsom with just days to go before voting ends, a change that comes after a deluge of political ads and support from leading Democrats who have slammed the effort as a Republican power grab.

According to a UC Berkeley Institute of Governmental Studies poll cosponsored by the Los Angeles Times released Friday, 60.1% of likely voters surveyed oppose recalling Newsom compared with 38.5% in favor of ousting the governor. Fewer than 2% of likely voters remained undecided or declined to answer, suggesting the issue is largely settled in the minds of California voters.

The findings, which were gathered by pollsters between Aug. 30 and Sept. 6, align with results from a batch of recent independent polls, all of which showed a decisive advantage for Newsom as the Sept. 14 recall election approaches.

A poll by the Berkeley institute just six weeks ago found that likely voters’ opinions were almost evenly split, a vulnerability for Newsom that at the time appeared to be driven mostly by the indifference many Democrats expressed about the recall.

Since then, Newsom’s campaign worked feverishly to redefine the recall campaign as a referendum on “Trumpism,” an effort aided greatly by the emergence of conservative talk show host Larry Elder, a loyalist to President Trump, as the clear favorite to become California’s next governor if the recall is successful.

“In the early going it was probably more about whether they liked Newsom or not. It was personalized,” said Mark DiCamillo, director of the poll. “By attacking his challenger, which is Elder, and framing it as ‘Look at what you’ll get if you vote for this guy’ … I think that really won the day.”

The poll found that 65% of likely voters — and 89% of likely Democratic voters and 64% of independent voters — thought electing a conservative Republican governor would threaten the state’s well-established progressive policies on climate change, immigration, healthcare and abortion.

“It’s changed the whole dynamic of the vote,” DiCamillo said. “It’s raised fear among voters and I think that fear has increased the engagement of Democrats.”

Juan Rodriguez, manager for Newsom’s anti-recall campaign, said he was not surprised by the increasing opposition to the recall. Along with a massive get-out-the-vote effort, the campaign enlisted help from Democratic Party heavyweights to urge Californians to scuttle the recall, including former President Obama, Vice President Kamala Harris and Sens. Elizabeth Warren of Massachusetts and Amy Klobuchar of Minnesota along with independent Sen. Bernie Sanders of Vermont.

The anti-recall campaign also spent tens of millions of dollars on television and social media ads blasting the recall as an underhanded attempt by Republicans to nullify Newsom’s election in 2018, a strategy backed by the national Republican Party, former GOP House Speaker Newt Gingrich and conservative media outlets such as Fox News and Newsmax, Rodriguez said.

“I think you’re now seeing Democrats so fired up because they know what this recall really is about,” he said.

Dave Gilliard, one of the strategists leading the effort to oust the governor, said the fact that Newsom enlisted the help of so many top Democrats and felt the need to raise tens of millions of dollars to fight the recall showed just how threatened he felt.

“They knew about four or five weeks ago that they were on the cusp of losing,” Gilliard said. “You wouldn’t have President Obama here on TV in the final week if you weren’t worried about your base.”

A month ago the focus of the recall was on Newsom and his record as governor, and when that changed so did the prospects of the recall.

“When he was able to focus in on one candidate, one opponent, his numbers started to improve,” Gilliard said.

The Berkeley survey also found that, by almost 2-1, likely voters rejected the notion that Newsom overstepped his authority as governor in his response to the COVID-19 pandemic, one of the main campaign arguments used by the GOP field of candidates hoping to replace him.

For the past month, Newsom and his supporters have touted his administration’s response to the pandemic, emphasizing that California has been among the states leading the nation in high vaccination rates and low COVID-19 case rates as the spread of the Delta variant has decimated Republican-led states such as Florida, Texas and South Dakota. On the campaign trail, Newsom has warned that all of California’s gains would be lost if the recall is successful.

The governor’s sharpest attacks have focused on Elder, who has boasted that before he sips his first “cup of tea” as California’s new governor, he would rescind the Newsom administration mandates requiring students to wear masks in public schools and vaccination requirements for teachers, state employees and healthcare workers.

“Consider the consequences of that. Look at what’s going on across this country. Look at states that don’t believe in science,” Newsom said at a rally in the San Francisco Bay Area Wednesday with Harris, a longtime political ally. “This election is a choice about life and death.”

Elder has hewed to the conservative view that the government and public health officials should allow people to make their own choices about wearing masks. He has decried attempts to force Californians to get vaccinated.

At an event in Glendale on Thursday, Elder made a point of saying he was “not anti-vax” and was himself vaccinated, but believed the issue should be a matter of choice.

Elder also accused Newsom of acting as if he’s above the very COVID-19 restrictions he put in place for every other Californian. Just under a year ago, the governor was caught on camera dining maskless with a group of friends at an upscale Napa Valley restaurant while his administration was telling others to avoid large gatherings. Newsom’s children also had the benefit of in-classroom instruction at their Sacramento-area private school while millions of public school students were forced into distance-learning programs from home.

The new poll found that Elder dominates the field of top replacement candidates. When asked to pick their first choice among the replacement candidates, 38% of likely voters preferred Elder — up from 18% in July. Democrat Kevin Paffrath, a social media personality who has more than 1.6 million followers for his personal finance videos on YouTube, came in a distant second with 10%.

Among other Republicans, former San Diego Mayor Kevin Faulconer was backed by 8% of likely voters, Rancho Santa Fe businessman John Cox, who was trounced by Newsom in the 2018 gubernatorial election, and Assemblyman Kevin Kiley of Rocklin were both backed by 4% of likely voters. Reality television star and former Olympic decathlete Caitlyn Jenner came in at 1%.

The Sept. 14 ballot has two questions: Should Newsom be recalled from office and, if he is ousted, which replacement candidate should take his place. If Newsom is recalled, the candidate who receives the most votes wins — no matter how many votes he or she receives.

A significant number of those likely to vote in the recall election — 31% — said they would not choose a replacement candidate, including nearly half of likely Democratic voters. That has distilled the pool of voters picking a candidate, and gives conservatives outsized influence over who may be selected as the top replacement — working to Elder’s benefit, DiCamillo said.

Ballots have already been mailed to all California registered voters. The mail ballot returns so far show that more than twice as many Democrats have voted as Republicans, according to state officials and political data researchers.

By contrast, among the much smaller proportion of voters who intend to cast ballots in person, most are voting to recall the governor.