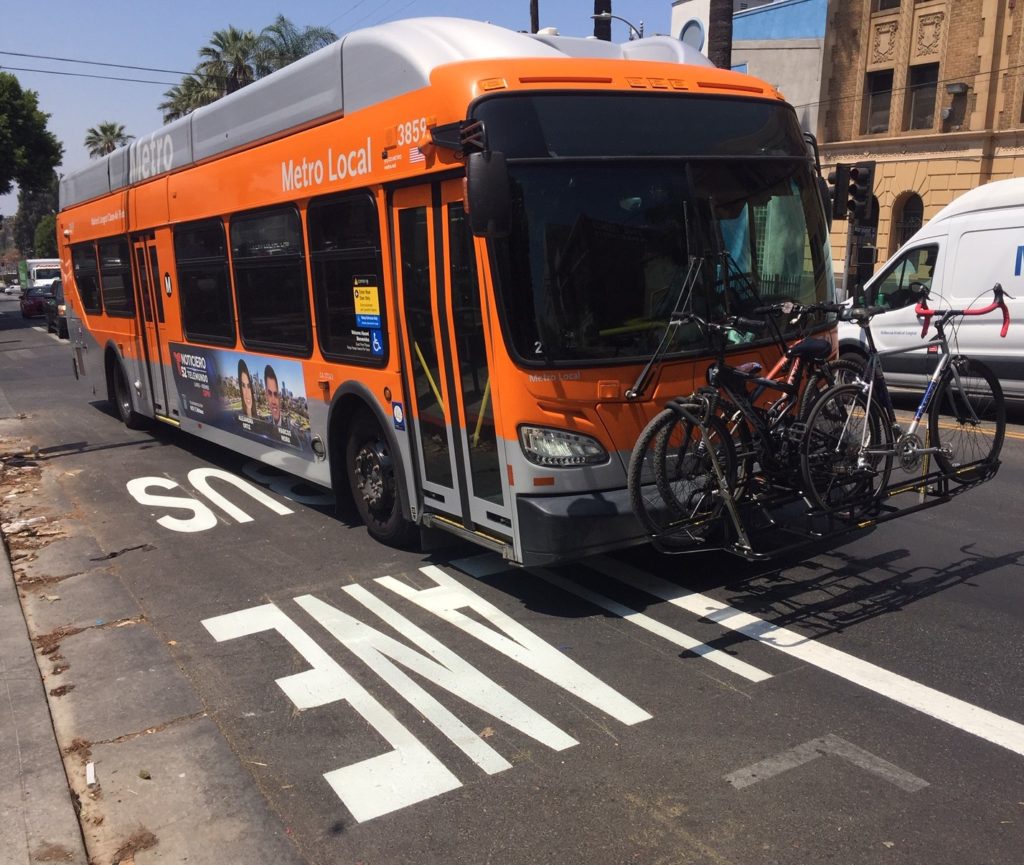 The Alvarado bus lanes will extend about 1.6-miles from 7th Street (at MacArthur Park) to Sunset Boulevard (near Echo Park).

This bus lane project was announced in December 2020. Alvarado is one of five recent new bus lanes that grew out of the bus speed improvement initiative spearheaded by L.A. City Councilmember and Metro Boardmember Mike Bonin. Of the recent crop of new Metro/LADOT bus lanes, these will be the first ones located outside of downtown L.A., though they are in neighborhoods just west of downtown that are still very much in the population-dense and transit-rich vibrant core of the city. The Westlake area arguably sees more people getting around on foot than downtown does, despite the area being more walked than walkable.

Per LADOT’s initial report on the facility, the Alvarado project “will increase bus frequency along the corridor from approximately ten minutes to seven minutes, and reduce travel time by three minutes in each direction.” To minimize parking loss, the bus lanes will operate only on weekdays, and at peak hours in peak directions: 7-10 a.m. southbound and 3-7 p.m. northbound. In addition to serving Metro line 200, the bus lanes will also, for a few blocks, serve LADOT’s DASH Pico Union/Echo Park buses.

In early 2021, Metro and LADOT started doing outreach for the Alvarado project. In addition to targeted engagement, the two transit providers hosted a March 17 virtual public meeting, where the project received a lot of pushback from a few drivers. A repeated concern was that drivers would be subjected to delays of up to ninety seconds (per Metro’s presentation). Ultimately, Metro Community Relations Manager Julia Brown responded to driver concerns saying that the project “focus is on equity;” it’s about serving transit riders without causing excessive inconvenience for others.

.@metrolosangeles Community Relations Manager Julia Brown reiterates that “focus is on equity” – getting bus riders where they need to go. 👏👏👏👏👏👏👏👏👏👏🚍🚍🚍🚍🚍

In an email today, LADOT spokesperson Colin Sweeney provided some statistics on the expected ridership on the Alvarado bus lane. Out of 12,096 anticipated daily boardings, riders are:

Construction crews were out working on the new Alvarado bus lane striping today.

The project appears to be nearly complete south of the 101 Freeway, with no new marking yet between the 101 and Sunset. Sweeney stated that LADOT crews are scheduled to complete work from 8th Street to the 101 this week.

So far, there is one red-backed area at the intersection of Alvarado and Beverly Boulevard.

There are some new signs posted, but not all of them appear to be installed yet.

With the new bus lanes, the peak-hour parking restriction periods will be extended by one hour. Southbound it was 7-9 a.m., but will soon extend to 10 a.m. Northbound it was 4-7 p.m. and will soon start at 3 p.m.

LADOT seems to have reverted to the less bike-friendly version of the bus-only lane signage. In 2016, DOT switched to a sign that included bikes at the top of the sign, replacing an earlier version that noted “Bikes OK” at the bottom. The new signs on Alvarado follow the older format.

LADOT and Metro plan to open the new Alvarado bus lanes in Summer 2021. Also this summer, Metro and LADOT plan to begin outreach for the next new bus lanes project: a couplet on Grand Avenue and Olive Street in downtown L.A.