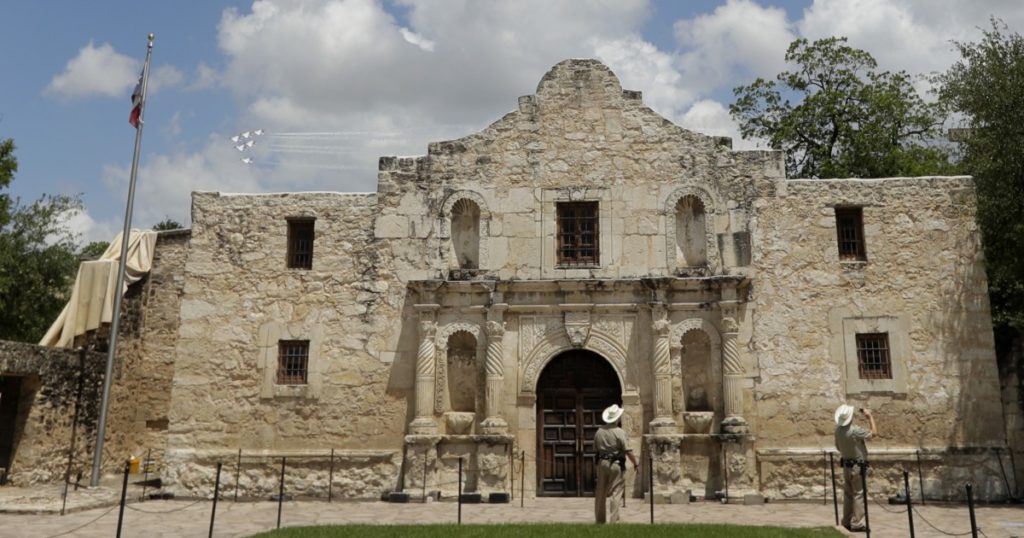 For a great number of Texans, the Alamo is the holiest of holies, a place, a totem, a shrine that physically embodies the values — courage, independence, liberty — they hold precious.

That veneration is based on a lot of made-up stuff.

Generations of school kids have been taught a comic-book version of events: how the heroic Davy Crockett, Jim Bowie, William Barret Travis and their vastly outnumbered comrades holed up in an old Spanish church and fought valiantly to the death, ultimately helping Texas win its independence from Mexico’s tyrannical rule.

It’s the kind of whitewashed — emphasis on white — curriculum Texas lawmakers seek to enforce with new legislation that would, among other things, end the required teaching of the Rev. Martin Luther King Jr.’s “I Have a Dream” speech. Young minds would also no longer be instructed that the eugenics movement and Ku Klux Klan are “morally wrong.”

In truth, the Texas revolt of 1836 wasn’t just about breaking away from foreign rule but also about sustaining the cotton-based economy and system of chattel slavery it required and Mexico wished to abolish.

As for the holy trinity of Texas lore, “Bowie was a murderer, slaver and con man; Travis was a pompous, racist agitator and syphilitic lech; and Crockett was a self-promoting old fool” who may very well have surrendered rather than fight, according to a lively and irreverent new accounting of the state’s history, “Forget the Alamo: The Rise and Fall of an American Myth.”

It’s not the first work to debunk what the authors — all Texans of good standing — call the Heroic Anglo Narrative and Texas Creation Myth, and the blowback was hardly a surprise.

“I don’t have militiamen protesting in front of my house, which is kind of what I expected would happen,” said coauthor Chris Tomlinson, a Houston Chronicle columnist who traces his Texas roots to 1849. “What I did not anticipate was the lieutenant governor using his office to shut down one of our events.”

That would be Dan Patrick, one of the most powerful demagogues, er, politicians in Texas, who has described the siege on the Alamo as “the most important 13 days in the history of Texas and Western civilization.” (Things like the Renaissance and Industrial Revolution apparently being vastly overblown.)

Patrick boasted on Twitter of pressuring the state’s history museum to abruptly cancel a discussion of the book he deemed a “fact-free rewriting” of Texas history “that has no place @BullockMuseum.” Had he glimpsed between the covers, the lieutenant governor might have happened upon its 334 footnotes and four-page bibliography.

Notably, just about an hour before the scheduled start of the talk, Patrick sent an email supporting a state law that would have required tech companies to explain their policies for removing content and allowed individuals to appeal those decisions. “In Texas,” the subject line read, “we treasure our right to free speech.”

If irony weren’t dead, it would have keeled over right then and there.

The fighting over the fighting that took place near present-day San Antonio commenced almost as soon as the Alamo fell to the forces of Mexican Gen. Antonio López de Santa Anna. Many of today’s popular perceptions have less to do with real-life events than with the mythmaking of Walt Disney and John Wayne, two Hollywood Cold Warriors, who used fictive accounts of Alamo heroism to promote their anticommunist views. President Lyndon Johnson, a Texas chauvinist who wrapped himself in the reflected glory, also had a big hand in perpetuating the phony narrative.

In recent years, the Alamo has become yet another front in the country’s never-ending culture wars, caught between those who like their history soothing and sanitized and others who prefer a truer, if less comfortable, rendering.

A visit to the historic site is disappointing. The Alamo is small and unceremoniously crammed in a chockablock area of downtown San Antonio, with a bunch of kitschy souvenir shops and Ripley’s Believe It or Not! among its symbiotic neighbors.

Plans for a dramatic $450-million upgrade have been delayed for years amid scuffling between those wishing to glorify the storybook legend — Patrick and George P. Bush, the political scion running for attorney general, among them — and those favoring a more accurate telling that includes the role Mexican Americans played at the Alamo and respect for the Native American burial ground beneath it.

The core of the redesign is supposed to be a collection of artifacts donated by English rock star Phil Collins; the authors of the new Alamo book make a convincing case that much of it is fake, or at best of questionable origin.

Tomlinson said the cancellation of the book talk has been terrific from a marketing standpoint. After slowing sales some, the publicity surrounding Patrick’s actions resulted in a huge influx of orders, he said, pushing “Forget the Alamo” up the best-seller lists and resulting in the printing of many more copies.

Still, Tomlinson said it was unnerving to have Patrick use his power to squelch a public forum, much less boast about it.

“No government official in the United States of America should be able to decide who may speak in what location,” he said, calling the action part of a dangerous movement “to establish memory loss about what we can remember and what we can’t.”

His coauthor, veteran journalist Bryan Burrough, tweeted, “I’ve worked all over the world for 35-plus years and I had to return to Texas to get my first government censorship and actual death threats.”

The book’s third author is Jason Stanford, a Democratic strategist whose family ties to Texas date from the Civil War.

Patrick has since asked the University of Texas to host an expert panel to “debate” the new Alamo book, though any attempt to refute the facts by promoting a folk tale, however revered, hardly constitutes a serious discussion. (And now, presenting the alternative view that the moon is, in fact, made of green cheese …)

Tomlinson said he has no interest in participating in “a Soviet-style show trial” and feels no obligation to appear alongside a bunch of fabulists or “neo-Confederate extremists” trying to bend history to their liking. But, he said, if some bona fide Alamo scholars were to take part, that would be different.

“I’d love to see these guys again,” Tomlinson said dryly, noting that many were interviewed for the book.