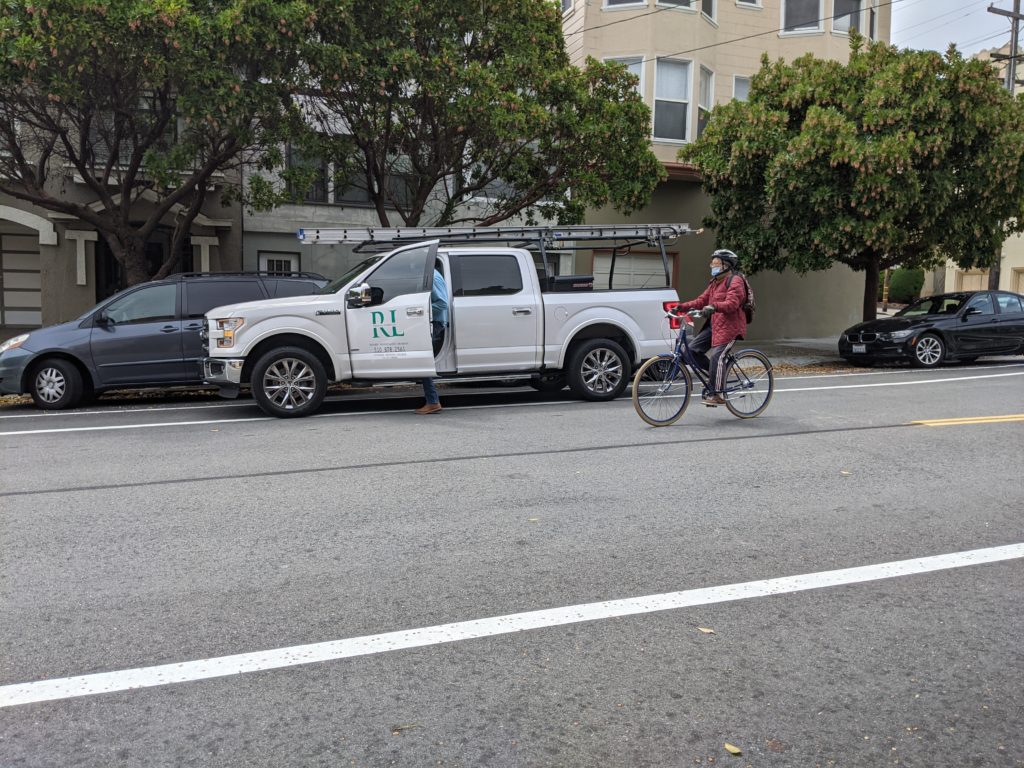 The goal of the Anza Street Bike Lane Project is to improve safety and connectivity for cyclists and pedestrians traveling east and west on Anza Street. The planning and preliminary engineering phases of the project explored the installation of bikeways in the core project area of Anza Street from 30th Avenue to Arguello Boulevard. Project evaluations and positive feedback from community-members during outreach confirmed the feasibility of extending Class II bike lanes and Class III bikeways east to Masonic Avenue. The planning phase additionally identified opportunities and funding for pedestrian safety improvements that will benefit all roadway users.

The project was approved in June. Supervisor Connie Chan, who represents the district, posed for photos last week as the new lines were painted:

Thank you @sfcta and @sfmta_muni for making the Anza bike lanes a reality! These lanes provide more bicycle connectivity throughout the district, and I look forward to working on adding more protection and lanes, and improving north-south connectivity in our bike network. pic.twitter.com/QR1AV103Dv

Also from the SFMTA’s page:

Anza Street, between 30th Avenue and Arguello Boulevard, is a 50-foot wide street running east and west through the Richmond District. Between Arguello Boulevard and Parker Avenue, Anza Street is a 56-foot wide street with four lanes of traffic. Between Parker Avenue and Masonic Avenue, Anza Street consists of a two-lane, 54-foot-wide roadway with 90-degree angled parking on the south side of Anza Street. Anza Street is often used by cyclists to traverse the Richmond District because it is wide and traffic is not heavy.

Advocates wasted no time calling out the short comings of adding more paint to Anza:

Halperin, of course, is absolutely right–as Streetsblog confirmed during a tour (see lead image and the photo below). Keep in mind all of these photos were taken during a single east-west ride late in the morning:

Streetsblog also came across a San Francisco Public Works car parked on the lane. It’s occupant was inside looking at his phone.

At the moment, Anza’s traffic circle at 23rd Avenue leaves it unclear how a bike is supposed to traverse the intersection:

According to SFMTA’s Jeffrey Banks, sharrows will be added to the circle.

Meanwhile, several advocates also called out Supervisor Chan’s hypocrisy at posing for a photo op as stencils of an unprotected bike lane go on Anza, at the same time she’s supporting and facilitating allowing cars back on J.F.K. drive and the Great Highway.

Furthermore, in Streetsblog’s view, to be called a real bike safety project, Anza Street needed far more than traditional, painted door-zone lanes (not to mention sharrows on the traffic circle and from Parker to Masonic). SFMTA officials often like to claim that it’s impossible to add protected bike lanes on a street with so many driveways, but that’s not true–it simply requires removing parking spaces to maintain sight-lines (here, again, is our go-to video from the Bicycle Dutch blog which shows how it’s done). Furthermore, if that’s really not possible, then Anza should be given concrete diverters that force traffic onto parallel streets, to limit through traffic and, thereby, the opportunity for bike-car interactions.

Of course, narrowed lanes and a few speed humps are welcome. But the city will never address its safety problems if it takes almost a year of planning and outreach just to get a few stripes and humps. As the New Wheel bike shop posted on twitter, “This cannot be seen as an accomplishment in 2021, in a #ClimateCrisis. Look to what is being done in Japan, China, Columbia, Germany, or even New York City for inspiration on how to take this seriously.”