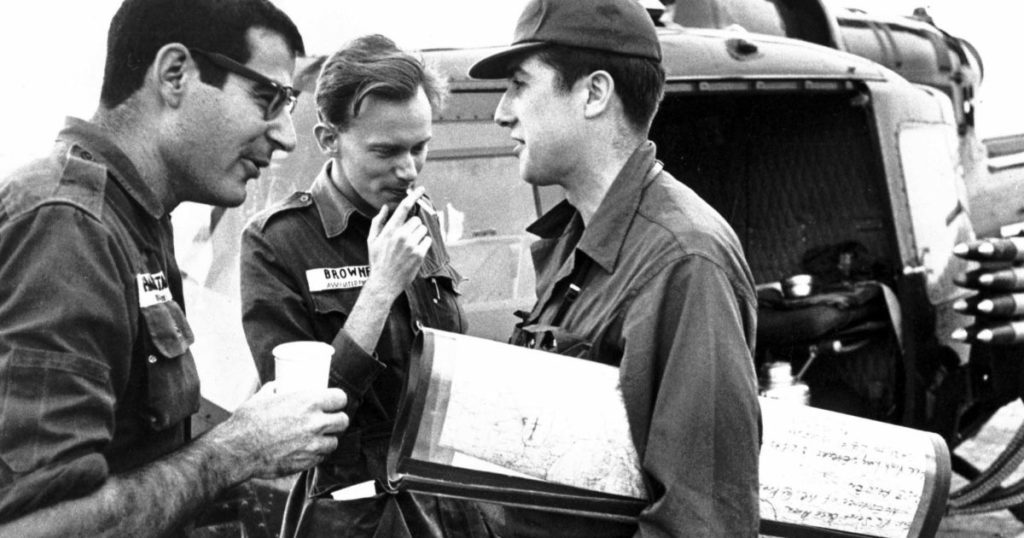 Neil Sheehan, the Pulitzer Prize-winning journalist who obtained the top secret Pentagon Papers that revealed how the United States for years had deceived the American public about the scope and success of its involvement in Vietnam, has died at his home in Washington.

Sheehan, who was suffering from Parkinson’s disease, died Thursday , his wife, Susan Sheehan, told the New York Times. He was 84.

The award-winning journalist was among a group of young war correspondents whose dispatches from the front lines challenged American government accounts of success in Vietnam. Presidential administrations questioned the reporters’ patriotism, as well as their news coverage.

In a 1988 interview with Harry Kreisler of the Institute of International Studies at UC Berkeley, Sheehan described the difficulty of covering a war that senior officials maintained the U.S. was winning, undercutting the less glowing reports from military advisors in Vietnam.

“We wanted to see this country win the war just as much as those advisors did,” he said. “We felt we would help to do that by reporting the truth.”

Later on, Sheehan’s work as the New York Times’ lead reporter on the Pentagon Papers — a secret Defense Department history of the war — revealed that American officials had consistently misled the public about the war’s scope. It also led to a Supreme Court decision affirming the role of a free press as a constitutional check on government power.

In Vietnam, Sheehan worked first for United Press International and then the New York Times. He was one of a handful of journalists known as the “Boys of Saigon” who included David Halberstam of the New York Times, as well as Peter Arnett and Malcolm Browne of the Associated Press.

Arnett told the Los Angeles Times in a 2019 interview that the group bonded quickly, especially as the South Vietnamese government threatened journalists. He described Sheehan as an “admirable opponent” and a likable, enthusiastic man. In 1965, the two jumped into a helicopter to get to the Battle of Ia Drang Valley, one of the war’s bloodiest.

At one point, Sheehan’s aggressive reporting received pushback from his bosses. In a 1988 profile of Sheehan, journalist William Prochnau claimed some of the correspondent’s stories were killed, including a piece that implicated U.S. Ambassador Henry Cabot Lodge in plans to overthrow South Vietnamese President Ngo Dinh Diem. He wrote that, in 1963, Sheehan’s editors at UPI told him to take a vacation or be fired.

But before Sheehan departed for Tokyo for that vacation, he prepared for the potential fall of the South Vietnamese government.

“He left behind some classic Sheehan footwork, convincing one of the Vietnamese plotters to tip him off to the imminent coup d’etat by sending out a coded message: ‘Please buy me two bottles of whiskey in the PX,’” wrote Prochnau. “The message would go to Halberstam or Ray Herndon, his new UPI assistant, who would send a second coded message to Tokyo.”

Sheehan left Vietnam in 1966, assigned to cover the Pentagon and, later on, the White House for the New York Times. In a piece summing up his experience titled “Not a Dove, but No Longer a Hawk,” Sheehan wondered “whether the United States or any nation has the right to inflict this suffering and degradation on another people for its own ends.”

His perspective resonated with Daniel Ellsberg, the former Department of Defense official and Rand Corp. analyst who gave Sheehan the Pentagon Papers. Ellsberg had previously leaked information to Sheehan and admired his coverage of the war.

“I saw him as a journalist … who was, however, not putting his own moral and sort of passionate feelings about the war to sleep, and not turning away as some journalists feel it’s their duty to do journalistically,” Ellsberg told the Los Angeles Times. “I thought he really was unusual in that respect.”

Sheehan and a team of reporters spent months in a makeshift office at a Hilton Hotel on Avenue of the Americas in New York sifting through the document’s 7,000 pages. Hedrick Smith, a former New York Times reporter who worked on the Pentagon Papers with Sheehan, told the Los Angeles Times that they were working under a “terrible fear of being discovered” and stopped by the government before publication. Ellsberg, he said, would also call periodically and threaten to take the story to another paper if it didn’t run soon.

Following publication of the first three of seven installments in June 1971, the Nixon administration won a temporary restraining order to prevent the New York Times from further publication. Seventeen days after the first installment, the Supreme Court ruled that the government could not justify its use of prior restraint, and the presses began to roll again.

Ellsberg later gave copies of the study to other papers, including the Los Angeles Times.

Smith, who first met Sheehan in Saigon, described him as a tough reporter with a very clear moral compass.

“Facts, reporting, digging, the truth, it all matters” to Sheehan, he said. “We had a government that was at a minimum shading the truth on a regular basis. It was a very tense and explosive and passionate time, and Neil was the right guy for that kind of story.”

Born in Holyoke, Mass., on Oct. 27, 1936, Sheehan graduated from Harvard University in 1958 and fell into journalism, working overseas as an Army reporter. He arrived in Vietnam in 1962, where he reported for two years for UPI and one year for the New York Times.

Sheehan ultimately resigned from the paper to work on “A Bright Shining Lie: John Paul Vann and America in Vietnam,” which won the 1989 Pulitzer Prize for nonfiction and the National Book Award. During the 16 years it took him to write the 862-page book, a process interrupted by a debilitating auto accident and scrambles to find funding, Sheehan adopted a nocturnal schedule.

His wife, Susan Sheehan, also a Pulitzer Prize-winning author, recalled in a piece for New York Times Magazine titled “When Will the Book Be Done?” giving thanks for leap years since they provided an extra writing day for Sheehan.

“There is also a quasi-religious streak in Neil,” she wrote. “He wanted to leave something meaningful behind — more than a reporter’s memoir, more than a newspaperman’s clip file. His goal was to write the book on the war in Vietnam.”

The book chronicled the war by telling the story of an American military advisor who had criticized U.S. strategy in Vietnam but also believed in the nation’s ability to win. The story opens with his funeral.

“I had the feeling that we were burying more than John,” Sheehan told the Los Angeles Times in 1988. “We were burying a whole era of boundless self-confidence.”

In addition to his wife, Sheehan is survived by his daughters, Catherine and Maria.