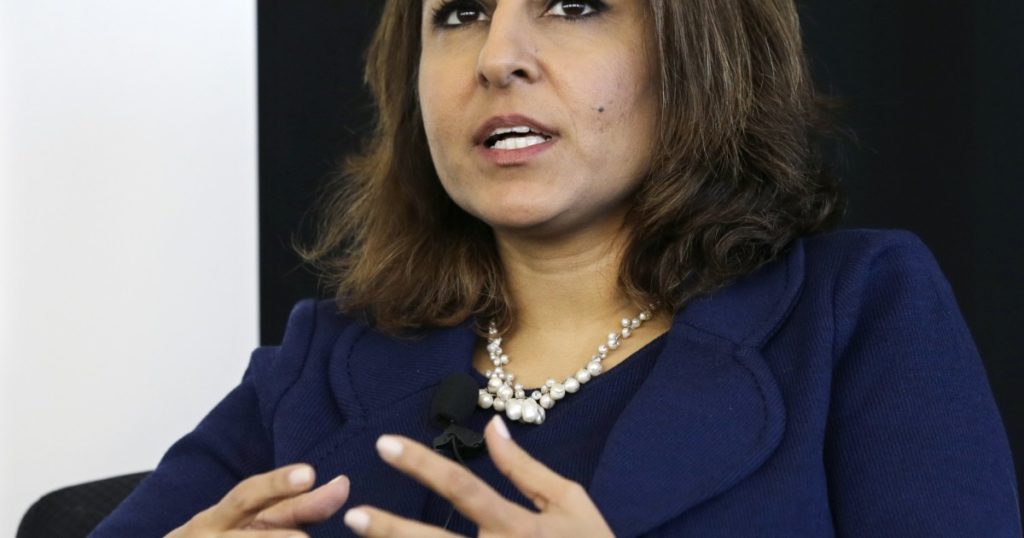 Neera Tanden, President-elect Joe Biden’s pick to run the Office of Management and Budget — which oversees federal spending and federal regulations — is a tough, smart, experienced policy wonk who worked for both Hillary Clinton and Barack Obama and then ran the Center for American Progress, a Democratic think tank, before joining Biden’s team.

So why do Senate Republicans say they’ll try to block her nomination? Because — and this is difficult to type with a straight face — she has said mean things about them on Twitter.

“Her combative and insulting comments about many members of the Senate … [create] a problematic path,” Sen. John Cornyn of Texas said last week.

Trigger warning for readers of delicate sensibilities: Yes, Tanden has said some unkind things. She once called Senate Majority Leader Mitch McConnell “Moscow Mitch,” a reference to the Kentuckian’s skepticism about Russian interference in the 2016 election. (McConnell denounced the nickname as a “smear.”) She accused Sen. Susan Collins of Maine of acting in “bad faith” when she defended Supreme Court nominee Brett M. Kavanaugh against charges of sexual misconduct. And she publicly urged voters to turn seven GOP senators out of office last year — an ill-advised tweet for anyone heading toward confirmation hearings, especially when six of the seven were reelected.

But that’s about as insulting as she got. In the bare-knuckled realm of internet-borne insults, Tanden hardly rates a second look.

And those senators are all in his own party. He treats Democrats worse.

It’s striking to see Republicans suddenly decide it’s time to revive old-fashioned standards of civility after four years of standing by the smack-talker in chief.

Hurt feelings isn’t the only reason Republican senators have given to explain their opposition. Sen. Rob Portman of Ohio, for example, said he worried that in addition to her tweets, she was “overly partisan.”

If Tanden is drawing Republican ire at the moment, she has also taken fire from the left, mostly because she was a longtime advisor to Hillary Clinton and has been a frequent critic of progressive champion Bernie Sanders.

Too radical for Republicans but not left enough for progressives? Sounds like a good thumbnail description of the Biden presidency.

In the end, a former McConnell chief of staff gave the game away. On Twitter — where else? — Josh Holmes wrote that Tanden had become “a sacrifice to the confirmation gods.”

It’s become a bipartisan tradition for the opposition party to remind a new president of its power — especially if, like McConnell’s GOP, it holds a majority in the Senate, which must confirm Cabinet nominations.

Even Biden, who prides himself on his ability to negotiate productively with Republicans, acknowledges that some of his nominations will face battles.

“They’re going to pick a couple of people just to fight [over] no matter what,” the president-elect told the New York Times.

Tanden, if she adheres to the usual playbook, will likely launch a charm offensive to see if she can win enough GOP votes to secure her new job. (If Republicans win both Senate runoff elections in Georgia, she’ll need at least two GOP senators to back her.)

She’ll go on an apology tour of the Senate, probably beginning with a visit to Collins to ask forgiveness for her ill-chosen words about bad faith.

If a few of those Senate Republicans want to be Machiavellian, they’ll tell Tanden she can have their votes — but only after reminding her that she now owes them a favor as the new OMB director.

And if Tanden is lucky, another Biden nominee will come along with a personal or financial problem that diverts the Senate’s attention from her tweets. The GOP needs only one or two sacrificial victims to prove its point.

The only Trump nominee who failed, for example, was Andrew Puzder, the Carl’s Jr. chief executive who was proposed for secretary of Labor; Republicans deserted him after it was revealed that he had employed undocumented workers at his home.

Beyond roughing up nominees, confirmation hearings do have a more important function: They give senators an opportunity to question potential Cabinet officers about the new president’s policies, and register their support or opposition.

In principle, that’s what the confirmation hearings should be about: How will the new Biden administration deal with the pandemic that still grips the nation, the economic hardship it has caused, and the racial inequities it has helped expose?

There may even be some time for such questions in Neera Tanden’s hearings. OMB, a little-noticed but vastly powerful agency, is far more than the federal government’s accounting department. It oversees federal regulation and deregulation. Its director can do a great deal to make the federal government function more effectively — or not, depending on the president’s views.

I don’t know whether Tanden will win Senate confirmation. But how she fares will give us an early sense of whether the new president’s hopes for bipartisan comity will last beyond Inauguration Week.