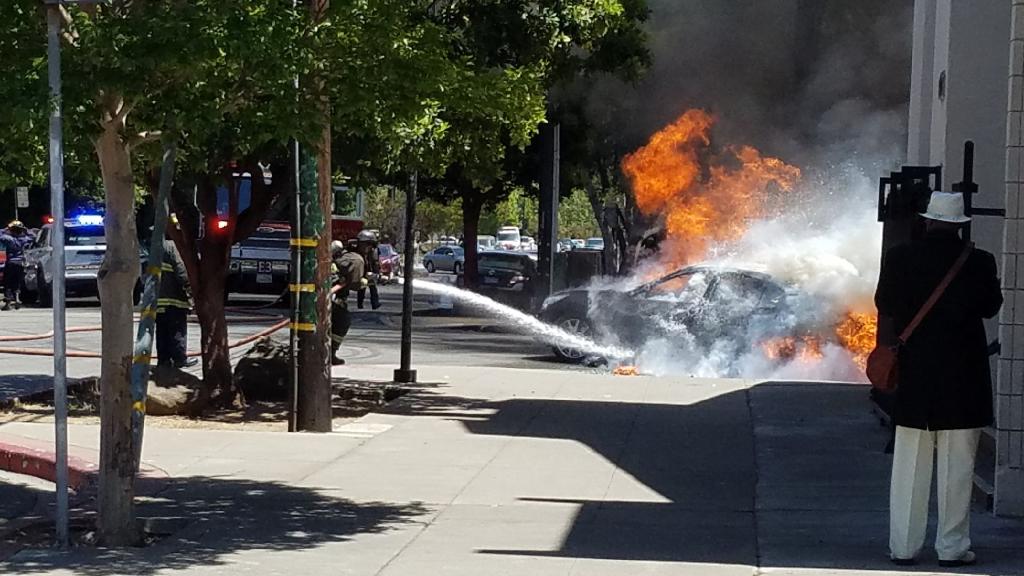 Motorists crashing into poles. Motorists slamming into buildings. Motorists slamming into each other. West Oakland residents on 8th Street have pleaded with city officials to install bollards, planters, or some other emergency measure to slow traffic and stop the continuing traffic violence perpetrated in their otherwise quiet neighborhood. The latest: a motorist on Memorial Day set his car ablaze doing donuts in the street.

Today we had a fiery crash on 8th street (citizen video, new 311 request) from someone doing donuts on 8th and Center. The driver fled on foot. Emotions are pretty raw over here. Many neighbors are terrified and angry. Please pardon my brevity and the mass mail.

While we are immensely grateful for the recommended Capital Improvement Plan (CIP) funds to install permanent traffic calming along 8th Street, today made it viscerally clear just how much we are in danger while we wait.

Earlier this weekend I had sat down to look into the proposed budget and consider how to get OakDOT the resources, budget, and mandate for rapid response traffic calming using concrete barriers. Also from what I’ve heard and seen, they need more authority to put concrete barriers in the street. I read a few old BPAC minutes and the Safe Oakland Streets initiative lays the foundation. I don’t yet know how that translates into getting physical protection in the streets.

He is recruiting help from advocates and calling on members of the Oakland City Council for help.

As Streetsblog previously reported, this neighborhood’s main drag has become a deadly playground for egregious motorists. Citizen advocates frequently record speeds in excess of 70 mph in this residential, 25-mph zone. It’s become so bad that in 2020 there were at least two incidents of cars plowing into houses:

The hard work of advocates coupled with these high-profile crashes has gotten the attention of local lawmakers, including Oakland Councilmember at Large Rebecca Kaplan and the Councilmember for the area, Carroll Fife:

I don’t see an acceptable reason why DOT can’t provide the safety measures residents are requesting here, and they’ve cancelled mtgs w/ me 4 times. @Safe8thOakland, next steps planning is in order. https://t.co/DTrqgY6r3g

Fortunately, there’s been some progress since Streetsblog last covered this issue, as explained in this tweet from advocates–albeit it’s short of what’s called for:

NEW “hardened intersection” median and flexposts at 8th and Peralta. A small first step toward a @Safe8thOakland!

Thank you supporters and @OakDOT staff!

A spokesperson for Oakland DOT told Streetsblog via email that the city is planning additional “…traffic calming improvements along the length of 8th Street in West Oakland, from Pine Street to Market Street, to help stop reckless driving by reducing speeding and instances of drivers leaving the roadway, improving 8th Street as a neighborhood street, and upgrading the existing bikeway.”

The spokesperson assured Streetsblog the intent is to install treatments made of “…concrete and asphalt, not plastic.”

The exact time frame for OakDOT’s improvements, however, is yet to be determined. Courtney stressed that a fatal crash is inevitable if emergency measures aren’t taken soon. He hopes other Oakland residents will join his push to get emergency safety measures on the street pronto. Here’s a list of officials he asks readers to contact.