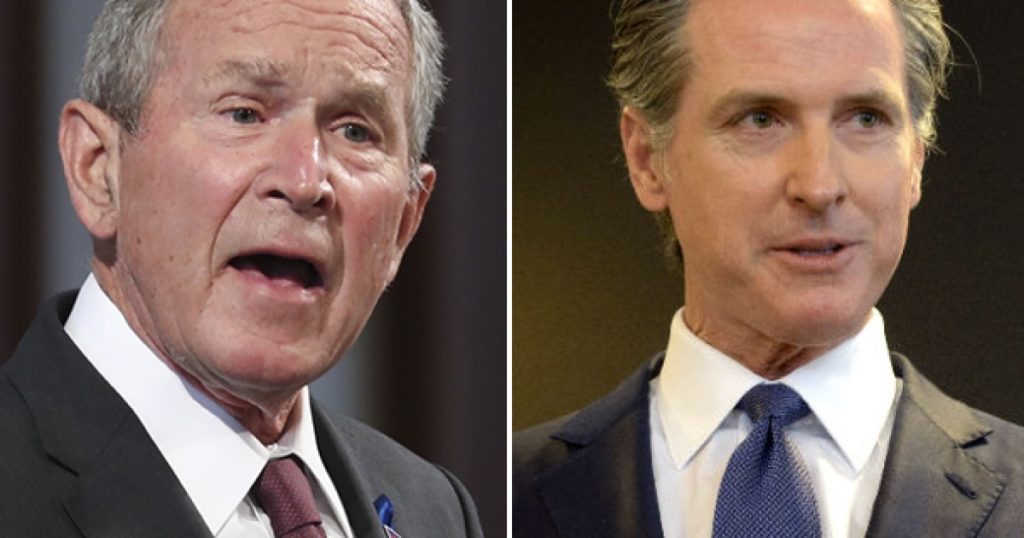 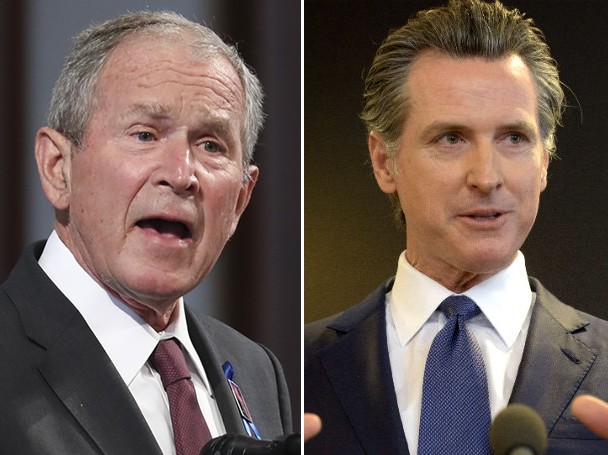 In 2003, amid California’s tumultuous gubernatorial recall election, President George W. Bush visited the state and had this to say about the campaign: Nothing.

“It’s an interesting story,” Bush told reporters on the eve of his two-day swing. “And I’m looking forward, like you are, to seeing the outcome.”

The attempt to recall Gov. Gavin Newsom — still in the qualifying stage, but almost certain to make the ballot — has turned into a nationwide Republican crusade, engaging partisans from the Arizona border to Washington, D.C.

The party’s national committee kicked in $250,000 to gather signatures, the Republican Governors Association hit up donors to help finance the effort and high-profile personalities such as Newt Gingrich and Mike Huckabee have championed the cause. The GOP’s amen chorus on Fox News has turned Newsom-baiting into a feature of its nightly fulminating.

All of which serves as a boon to the beleaguered Democrat.

In 2003, Davis and his allies claimed his ouster was a Republican power grab and part of a larger scheme by the national party “to steal elections they can’t win.” The recall effort came, after all, not long past the 2000 presidential campaign, which ended in a tie broken by a partisan 5-4 Supreme Court decision that delivered Bush the White House.

But the conspicuous lack of engagement by the administration and national Republican leaders “made it impossible to credibly sell that argument,” said Garry South, a former Davis strategist. Polls showed most voters simply didn’t see the recall as a partisan movement, especially with Schwarzenegger — the front-runner to replace Davis — running more as an independent than Republican.

Party leaders outside the state “hadn’t laid themselves out there the way they’ve done now,” South said. “What they’ve done is hand Newsom on a silver platter every bit of evidence he needs to show this is an attempt by the Republican Party to win through a recall what they couldn’t win fair and square in a regularly scheduled election.”

Which is the very heart of Newsom’s survival strategy: In every breath, he and supporters refer to the “Republican recall,” lest anyone forget its grounding in partisan politics.

Bush had several reasons to steer clear of the 2003 campaign.

He’d made it a policy to avoid state political fights, most notably during the 2000 primaries when he sidestepped South Carolina’s Confederate flag debate. Bush also didn’t want to bolster Democratic assertions the White House was plotting against Davis.

Moreover, strategists thought it might be better for his 2004 reelection prospects to have a weakened Davis in office rather than a Republican grappling with California’s budget deficit and other messes. (That was when GOP presidential candidates still bothered competing in the state.)

In retrospect, Bush’s neutrality, whether principled or self-interested, seems almost quaint, like those old-timey photos of convention delegates in suspenders and straw boaters. It was a different era; fiercely partisan, yes, but not as rage-filled and heedlessly cutthroat as politics are today.

Some national Democrats took up Davis’ cause, praising his performance and offering the requisite attack on rogue Republicanism — mostly, it should be said, while passing through California to raise money for their presidential aspirations.

“People went through the motions in 2003, but there wasn’t that passion among Democrats” to fight the recall effort, said South. “This is like all-out war.”

The support of Sanders, who still commands a sizable following of progressive faithful, may be particularly significant.

By giving Newsom cover on the left, it could spare the governor the political pressures Davis faced in 2003, when he signed a number of measures intended to appease liberals and ensure their opposition to his ouster. One bill in particular — a law giving driver’s licenses to undocumented immigrants — was highly unpopular among the broader electorate and helped lead to Davis’ recall.

The more consequential action, though, is the loud and eager intervention of national Republicans.

Biden won a thumping 64%-33% victory over Donald Trump in California, crushing the president by more than 5 million votes. And that landslide came before Trump attempted to steal the 2020 election and helped incite a deadly assault on the Capitol.

If the GOP hopes to recall Newsom, the best thing Republicans outside the state could do is keep their distance and make it harder for Democrats to nationalize the contest and turn the election into a referendum on Trump and the ascendant QAnon wing of the party.

But if anyone believes the voluble ex-president will keep from weighing in, silencing himself the way Bush did, there’s a bridge in Mar-a-Lago that’s for sale…