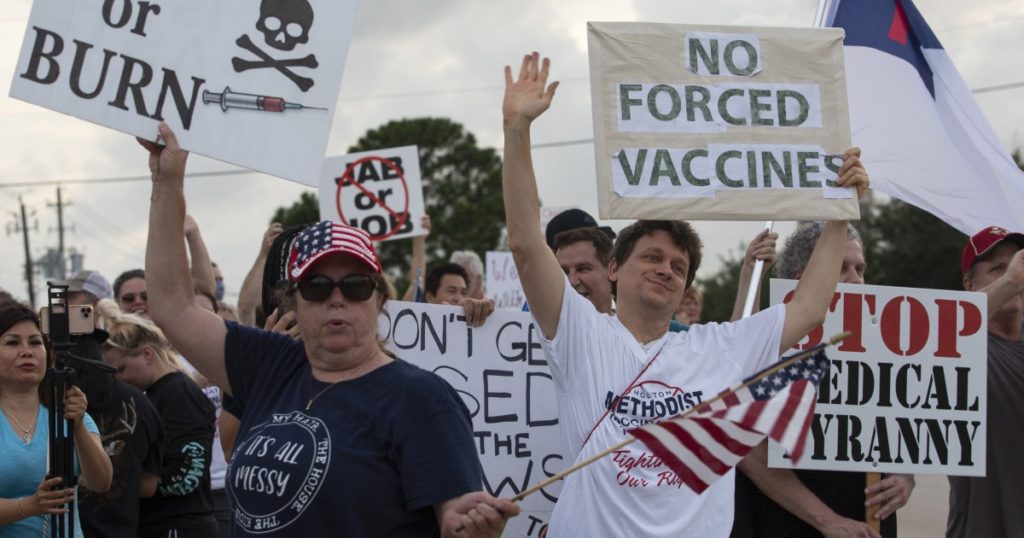 At least 153 employees of a Houston hospital — including doctors and nurses — were fired or resigned Tuesday after refusing to get vaccinated against COVID-19, one of the first mass terminations since vaccinations started in the U.S. this year, reinvigorating a national anti-vaccine movement.

In April, Houston Methodist Hospital began requiring vaccination for its more than 25,000 employees across Texas, claiming to be the first hospital in the nation with a COVID vaccine mandate. Those who did not provide proof of vaccination by June 7 — or who had not applied for an exemption based on “medical condition (including pregnancy deferment) or sincerely held religious belief” — faced suspension without pay for two weeks. The hospital fired two managers for refusing the vaccine in April, and suspended 178 more staff members on June 7.

The employees were given until midnight Tuesday to get vaccinated, and “very few” resigned or retired early to avoid vaccination, said Gale Smith, a hospital spokeswoman.

Smith said hospital leaders had no regrets about the policy, despite the national attention it drew.

“Patients are always first and that’s what it’s always been,” she said.

Last month, nurse Jennifer Bridges and 116 other suspended employees sued the hospital in federal court, alleging that COVID-19 vaccines — which are approved by the U.S. Food and Drug Administration for emergency use — were still experimental. The suit argued that mandating the vaccines violated the Nuremberg Code, ethical rules created after World War II to bar the type of gruesome human experiments conducted by the Nazis.

Dr. Marc Boom, Methodist’s CEO, said that as the first hospital to require the COVID-19 vaccine, they expected some backlash.

“Criticism is sometimes the price we pay for leading medicine,” Boom said in a statement after the lawsuit.

Of the hospital’s staff, 285 were granted medical or religious exemptions from the vaccine and 332 were allowed to defer it, Boom said, but most of the rest got vaccinated by the hospital’s deadline.

“Our employees and physicians made their decisions for our patients, who are always at the center of everything we do. They have fulfilled their sacred obligation as healthcare workers,” he said in a statement.

A Texas federal judge dismissed the employees’ case against the hospital earlier this month, rejecting their argument that the hospital was forcing them to take an experimental vaccine.

“This is not coercion. Methodist is trying to do their business of saving lives without giving them the COVID-19 virus,” U.S. District Judge Lynn Hughes wrote in the ruling. “It is a choice made to keep staff, patients and their families safer.”

The Methodist employees appealed to the U.S. Court of Appeals for the 5th Circuit, and while it’s not clear how soon the court will hear the case, it’s already shaping up to become a national legal battle pitting personal medical freedom against public health.

“During the height of the pandemic, my clients served on the front line, treating patients who had contracted COVID. As a result of their sacrifice, many of my clients contracted COVID. As a thank you for their service and dedication, Methodist has awarded them a pink slip,” said Jared Woodfill, a Houston attorney and conservative activist representing Methodist employees in the suit.

“Employees should not be required to be human guinea pigs to keep their jobs,” Woodfill said. “We are hopeful that the United States Court of Appeals will rectify this wrong.”

Thomas Lenz, a labor law expert at USC, said issues raised in the case may be unprecedented.

“We’ve seen plenty of examples where employers could require a vaccine for something they see as a public health issue, putting it above personal choice. But the fact that this vaccine hasn’t gotten the full FDA approval yet puts us in somewhat uncharted waters,” he said.

Critics of the mandate argue that the safety of the vaccine can’t yet be guaranteed, and that it was rushed through without enough concern about side effects, he said. That means that many more employers might feel more comfortable requiring the vaccine once it passes the FDA’s standard, longer-term approval process.

“As lawyers, we’re watching closely — we want to make sure we are applying rules consistent with the current context. At the same time, I can’t think of anything in my lifetime that could ever equate to the public health scale of COVID-19,” Lenz said.

He added, “When you do have an employer who feels the commitment to safety warrants a vaccine requirement, that’s going to create friction. Frankly, I expect many more lawsuits on this.”

After their last day of work earlier this month, the plaintiffs held a walkout protest that drew several hundred demonstrators outside a Methodist facility east of Houston, wearing shirts that said “The jab or my job.” Bridges has raised more than $200,000 online, started the nonprofit Guardians of Medical Choice, and is planning another protest outside the hospital’s main office on Saturday. She said she’s received support from right-wing extremists (Alex Jones has said he plans to attend the Saturday protest) but also from liberal anti-vaccine activists and libertarians who opposed pandemic lockdowns.

“So many people are tired of their rights being taken away, they don’t want to be told what to do,” said Bridges, who led a petition against COVID-19 vaccination before suing the hospital. “It’s taking away our rights and it’s in the history books: Once they take some of our rights away, it just goes.”

Bridges, 39, worked at Methodist for seven years in a medical surgery unit before refusing the COVID-19 vaccine. She initially worried that she would be blacklisted, unable to find work elsewhere. Instead, she said she received multiple offers from private nursing companies sympathetic to her cause and started working for one of them Tuesday, with the same pay and benefits. Bridges said she is excited about the lawsuit.

“Whether we win or lose, the federal government is going to have to create some laws one way or another” to address the issue, she said. “Hopefully it will protect everybody else from going through this.”

Kara Shepherd said she has no regrets about refusing the vaccine and joining the lawsuit even though she has yet to find a new job to support her two children, ages 4 and 2.

“All of us feel that this is a much greater fight than Houston Methodist. This is happening all over our country. We want to stand up, not just for ourselves, but for others who are facing this or could be facing it,” said Shepherd, 38, a former labor and delivery nurse. “Hopefully laws will be put in place to prevent companies from doing this. It’s about much more than a job: It’s about my body, that I should have the choice what gets put in it.”

Shepherd said the fight has made her more opposed to all vaccinations than she was before (both she and her children have been vaccinated against other diseases). She was upset to see Boom and others fault nurses who refused the vaccine for not prioritizing patient safety after many of them spent the last year on the front lines of the pandemic.

“Everyone is telling us nurses, you’re being selfish, you don’t care about your patients. It’s a whole different tune than last year. Last year, we were heroes,” she said. “It’s like we went from heroes to zeroes; we’re disposable people.”

Alison Antu, a former nursing tech at Methodist, said she refused the vaccine only after her request for a medical deferral was repeatedly denied. Antu, 24, said she has an autoimmune condition that puts her at increased risk of blood clots and she worried the vaccine could trigger a miscarriage as she and her husband try to conceive their second child.

“My family is more important than my job,” Antu said, but the firing still bothered her, especially after she spent six months treating COVID-19 patients, coping with shortages of masks and other safety gear.

The federal Equal Employment Opportunity Commission, or EEOC, which investigates job discrimination cases, issued guidance this year saying businesses could require that employees be vaccinated before they return to in-person work. Mandates do not violate the Health Insurance Portability and Accountability Act, or HIPAA, because the act covers what a medical provider can share with others but not what an employer can require of staff.

Several major hospitals across the United States are requiring coronavirus vaccinations among staff members, many of whom have been eligible since late 2020. Last month, the University of Pennsylvania Health System announced that it would require its roughly 44,000 staff members to get vaccinated by September, citing Methodist Hospital’s policy.

But a survey conducted by the National Alliance of Healthcare Purchaser Coalitions found that only 8% of employers interviewed anticipate that they will institute a mandate. One reason is the long list of bureaucratic requirements that must be met before an employer enforces such a mandate, said Michael Thompson, the chief executive of the National Alliance. Companies aim to avoid litigation costs that come with lawsuits from employees who say their religious beliefs and disability statuses were overlooked.

More employers may mandate COVID-19 vaccines once they’re fully approved by the FDA, beyond the current authorization for emergency use. Until then, many businesses are still focused on adjusting office configurations, such as improving ventilation and spacing out desks, and have said they want to see how many people voluntarily get vaccinated before enforcing an order. They have also said they want to be sensitive to distribution inequities, allowing more time for people who have struggled to access the vaccine.

“The ink isn’t dry on this issue yet,” Thompson said. “I don’t think we’d find the same results if we surveyed again in six months.”