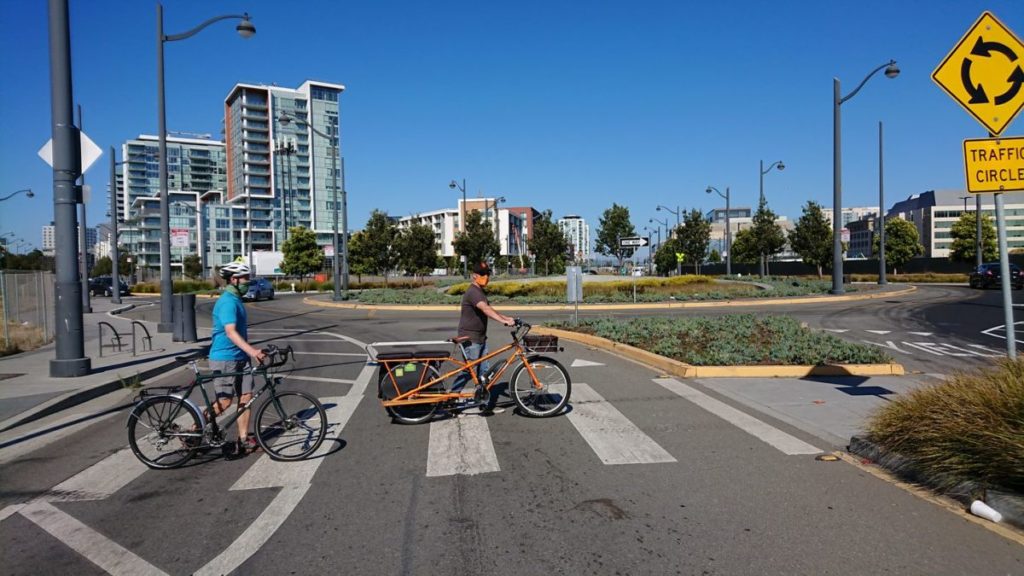 A second Dutch-style roundabout is in the works for San Francisco, this one in Mission Bay. And Nik Kaestner, Director of Sustainability for the San Francisco Unified School District, wants to make sure this one is done right.

SFUSD is planning a new elementary school, which should be built by 2025, adjacent to the existing traffic circle at the intersection of Mission Bay Drive, Owens Street, Channel Street, and Mission Bay Boulevard. Kaestner’s job is to evaluate the sustainability of new school buildings. However, as an avid cyclist with an interest in planning, “I looked outside the building … and I would not feel comfortable biking with my son to the school.”

Mission Bay has some nice mixed-use paths along the channel that are safe for riders of all ages and abilities. But streets in the area have gutter pan, painted stripes with no protection (aka typical “bike lanes”). At the Mission Bay traffic circle, even those disappear; cyclists are dumped into fast-moving traffic, guided by nothing more than “sharrow” markings, as seen below:

In Streetsblog’s view, leaving bike “infrastructure” such as this next to an elementary school would be an act of criminal negligence.

Kaestner, who is German and well-traveled in the Netherlands, knew the city could do better. “I pulled up Dutch roundabout designs after I got home.” He realized right away there was plenty of space for a second ring, specifically for bikes, around the traffic circle–but only if someone got the design on the table before construction started on the school and adjacent properties.

He met with representatives from SFMTA, including Senior Transportation Planner Kim Walton, who handles transportation in the area. It turns out as part of the overall plan for the school, the city will also be building a park and community garden–with more than enough room to include an outer ring of the bike lane, seamlessly connected to paths along the channel.

Walton and other SFMTA officials listened and, Kaestner told Streetsblog, they were keen to rebuild the traffic circle to Dutch designs. They even knocked up this drawing:

Note the bike path at the top of the map, just below the community garden. It shows easy, seamless connections to the circle from the paths in the park. However, in this early drawing, the outer ring doesn’t go all the way around and the connection to the on-street bike lanes is unclear.

Roundabouts are safer than right-angle intersections because they eliminate t-bone crashes, which can be devastating for motorists and cyclists. However, to design them to Dutch best-standards, there should be a separate outer ring for bikes that goes all the way around, to make sure cyclists and motorists are kept apart as they navigate the circle, as seen below:

Earlier this week, Streetsblog covered San Francisco’s first Dutch-inspired roundabout, this one in the Presidio. Melissa Bruntlett, an expert on Dutch infrastructure, was critical of the deviation from standard Dutch designs on that one: San Francisco’s roundabout has a stop sign and 90-degree turns for cyclists, as seen in the unhappy tweet below.

“instead of using shark teeth to reinforce that motorists must yield to cyclists and pedestrians crossing Girard, they decided a stop sign for cyclists would be safer”

Many comments were along those lines, accusing the Presidio of departing from Dutch best practices and “reinforcing car supremacy.”

Kaestner read about the issues and reached out to Streetsblog, with the hopes of drawing attention to the developing situation in Mission Bay. He already had to push to reduce the amount of parking at the school. He wants advocates to help apply pressure on city officials to add top-notch bike infrastructure, safe for children to ride to school; that means sticking with proven Dutch designs.

“Otherwise you get the situation you got in the Presidio,” said Kaestner.

Streetsblog has reached out to Walton and SFMTA and will update this post. If you want to get involved in influencing mobility in Mission Bay, including the design of the roundabout, check out SFMTA’s page.