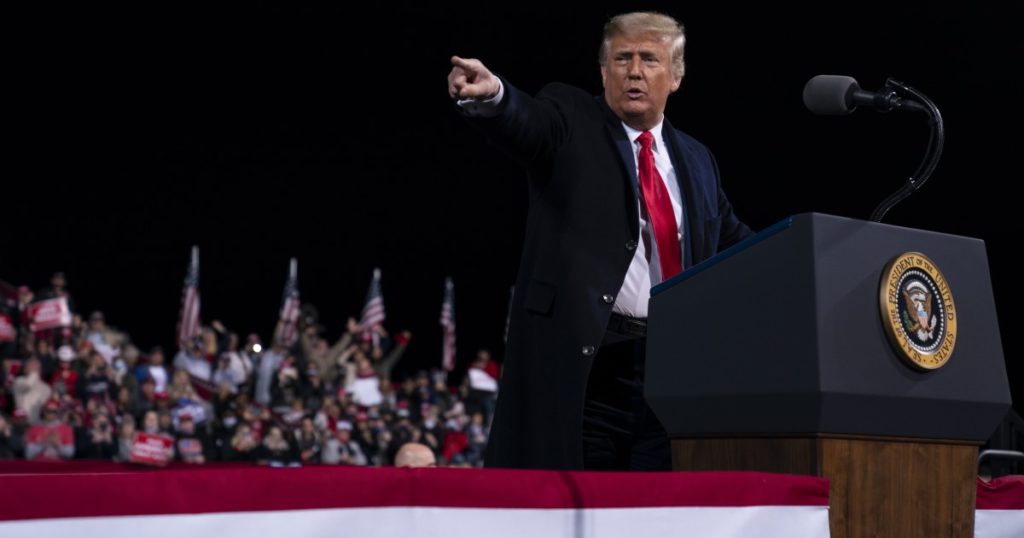 President Trump’s false claim that he beat Joe Biden in last month’s election — and won the state of Georgia — drew sharp rebukes Sunday from top Georgia officials, less than a month before a contest that will determine control of the U.S. Senate.

Further roiling Trump’s turbulent final weeks in office, his lawyer Rudolph W. Giuliani — the former New York City mayor who has waged an often-eccentric legal crusade on the president’s behalf to try to overturn the election — has tested positive for the coronavirus, Trump said on Twitter. Trump and many in his inner circle have fallen ill with the virus.

With Trump showing no sign of acknowledging defeat, Georgia’s lieutenant governor, secretary of state and a senior election official — all Republicans — expressed dismay over his insistence that the Georgia vote count was illegitimate and the president’s demand that the state legislature be called into session in a bid to overturn it.

At a rally Saturday night in Valdosta, Ga., ostensibly in support of the two GOP candidates for Senate seats, Trump again raged, without evidence, that the November election was “rigged,” and excoriated Georgia’s Republican leaders, including Gov. Brian Kemp.

Brad Raffensperger, the Georgia secretary of state who has repeatedly been vilified by Trump for defending the November election’s validity, said that convening a special legislative session to try to overturn it would be “nullifying the will of the people.”

“At the end of the day, the voice of people [was] spoken,” Raffensperger said on ABC’s “This Week.”

The state’s lieutenant governor, Geoff Duncan, said state officials were “certainly not going to move the goalposts at this point in the election.”

Appearing on CNN’s “State of the Union,” Duncan said “mountains of misinformation” about voter fraud were hurting the electoral prospects of Georgia Republican Sens. Kelly Loeffler and David Perdue, who face the voters Jan. 5.

“Unfortunately, he did not win the state of Georgia,” Duncan said of Trump, who telephoned Kemp on Saturday to try to get him to convene the legislature to appoint electors who would overturn the Georgia result.

A third Republican Georgia official who helped manage the election, Gabriel Sterling, also disputed Trump’s fraud claims in an appearance on a news talk show. Sterling last week held an impassioned news conference to decry a deluge of social media threats by Trump supporters against officials who upheld the count.

“It is a game of whack-a-mole to even say: ‘The president’s statements are false,’” Sterling said on NBC’s “Meet the Press.” “This undermines democracy.”

At his rally, Trump encouraged his supporters to continue to vent fury over the vote-counting process at those who oversaw it. “So far, we haven’t been able to find the people in Georgia willing to do the right thing,” the president said.

At the midpoint between the Nov. 3 presidential balloting and the Jan. 5 contests in Georgia, only a fraction of congressional Republicans have acknowledged Trump’s electoral loss, a stance that has grown increasingly difficult to sustain with Biden having officially amassed more than the number of certified electoral votes needed for victory.

On “This Week,” Sen. Mike Braun (R-Ind.) brushed aside the dismissal of dozens of lawsuits by the Trump campaign trying to overturn state results.

“We’ve got a process and I think we’ve been going through [that] since the election. It’s going to play itself out,” he said.

Increasingly, Trump allies — and sometimes the president himself — inadvertently acknowledge the impending reality of Biden’s presidency. White House Press Secretary Kayleigh McEnany, who also serves as a campaign spokesperson, called Sunday in an interview on “Fox and Friends” for preservation of GOP control of the Senate through the Georgia races.

“If we lose these two Senate seats, guess who’s casting the deciding vote in this country for our government?” McEnany said. “It will be Kamala Harris.”

Despite Republican lawmakers’ attempts to avoid publicly contradicting the president by stating the obvious, a bipartisan group of senators called Sunday for approval of a $908-billion coronavirus relief package.

“It would be what I call stupidity on steroids if Congress doesn’t act,” Sen. Mark Warner (D-Va.) said on “State of the Union.”

With COVID-19 deaths soaring far beyond the worst levels of fatalities in the pandemic’s early months, Trump’s health and human services secretary, Alex Azar, took irritated exception to Biden’s expressions of concern about whether adequate preparations were being made for a vaccine rollout next year.

“With all respect that’s just nonsense,” Azar said on “Fox News Sunday,” declaring that the administration has “comprehensive plans” to distribute the vaccine. During the interview, despite being prompted twice by host Chris Wallace, Azar refused to refer to Biden as the president-elect.

With the Trump administration in its final weeks, some health advisors who have previously been hesitant about publicly contradicting Trump appeared slightly emboldened. Dr. Deborah Birx, a member of the White House coronavirus task force, said on NBC that it was “frustrating” to hear people repeating back misinformation about the virus.

Heading into the winter months, when hospitalizations and deaths are expected to intensify, the pandemic has already reached catastrophic proportions. U.S. deaths from COVID-19 have surpassed 280,000, and infections are approaching 15 million.

“This is not just the worst public health event, this is the worst event that this country will face, not just from a public health side,” Birx said. “Yet we know what behaviors spread the virus, and we know how to change those behaviors to stop spreading the virus.”