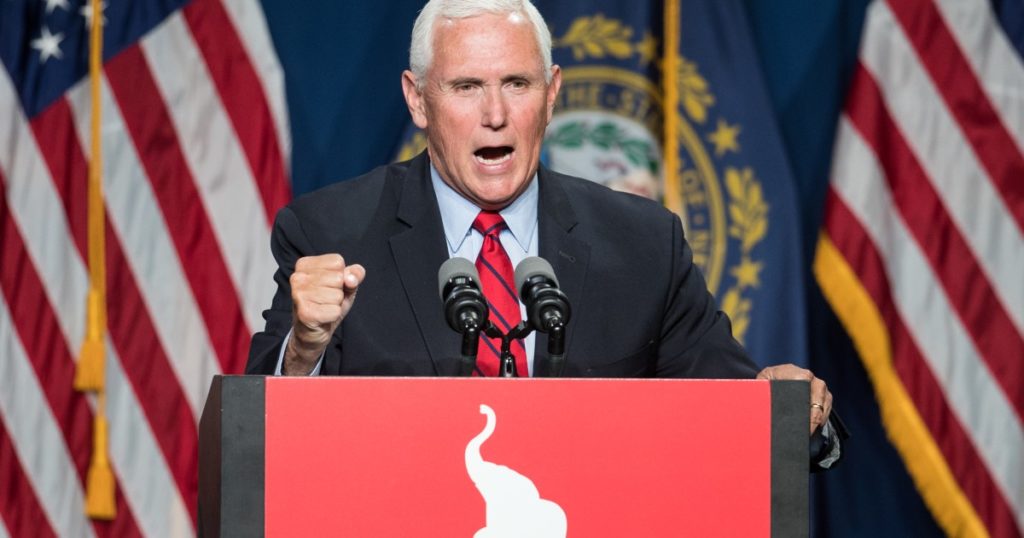 Former Vice President Mike Pence laid out his vision for the future of the Republican party in a speech Thursday night, attempting to unite the party’s quarreling factions by appealing to both traditional small-government conservatism and populist Trumpism.

His remarks included an expansive reflection of his role on Jan. 6 certifying President Biden’s victory, explaining his actions as abiding by the law, despite pressure from former President Trump not to do so.

“I will always be proud to have played a small part on that tragic day when we reconvened the Congress and fulfilled our duty under the Constitution and the laws of the United States,” Pence said in the most extensive comments he has made so far about that day.

The address was given at the Ronald Reagan Presidential Library in Simi Valley, which is hosting a series of talks this year by Republican luminaries about the future of their party.

Pence, who is widely seen as a possible GOP challenger to President Biden in 2024, urged Republicans to not only be the “loyal opposition” to the Democratic party, but also offer a positive pitch to voters.

“The pillars of that agenda include our party’s traditional conservative priorities — maintaining a strong national defense, free market economics, traditional values and the right to life. On these, we will not waver,” he said. But, he added, “it must also include new pillars that President Trump brought to the fore as we served — ideas that fired the imagination of everyday Americans and expanded the reach and appeal of the Republican Party.”

The speech underscored the delicate balancing act facing the former congressman and Indiana governor, who faces skepticism from the two poles of the GOP: die-hard supporters of Trump and those who want to break away from the former president.

Rob Stutzman, a Republican strategist based in Sacramento, likened Pence’s play to both sides of the party as a predicament akin to the biblical parable when Jesus warned against faith that is not cold or hot, but lukewarm.

“There’s not a natural base with the party for being a straddler,” Stutzman said. But, he added, that may change if Trump’s grip on the base loosens.

The sold-out audience of 820 people, arrayed in a glass-walled pavilion under a suspended Air Force One that Reagan flew on, received Pence warmly as he rattled off a list of priority issues: Among them were border security, a tough stance against China and “patriotic education” of history that rejects the premise that America is a racist country.

The partnership between Trump and Pence was more of a political odd couple than ideological soul mates: the former a proudly crude real estate developer whose party affiliation has shifted over time and the latter a stalwart conservative and devout Christian. The pairing helped shore up Trump’s standing among evangelical voters in 2016, and Pence remained a staunch supporter of the president throughout his term.

Instead of being the likeliest heir to Trump’s legacy, however, Pence has faced backlash from the former president’s most fervent backers after Pence fulfilled his legal obligation to formally certify Biden’s win. Rioters who stormed the Capitol on Jan. 6 in an attempt to thwart that certification chanted “Hang Mike Pence!” after Trump wrongly insisted that Pence could block the election results from being finalized.

The hard feelings appear to have endured among Trump and his biggest fans. Trump said this week he remains “very disappointed” that Pence certified the vote, wrongly stating that his vice president could have thrown the election back to state legislatures to decide the outcome and potentially keep Trump in office. Days earlier, Pence was met with a hail of boos and shouts of “traitor!” when speaking at a conservative Christian conference.

There were no such outbursts on Thursday as Pence spent considerable time addressing Jan. 6. He rejected the premise that he or any other individual had the authority to block the results.

“The truth is, there is almost no idea more un-American than the notion that any one person could choose the American President,” he said.

He warned Republicans that “if we lose faith in the Constitution, we won’t just lose elections — we’ll lose our country.”

Though Pence departed from Trump by affirming the legitimacy of the 2020 election, he took pains to lavish praise on his former governing partner, likening him to Reagan in his ability to energize the party. He touted achievements during their tenure, such as increasing domestic energy production and rapid development of a coronavirus vaccine, and laced into Democrats for promoting “an agenda of national decline.”

Some attendees said they were drawn to Pence’s polished demeanor, but said they’re keeping their minds open about the next presidential election. Robert Ford, a retired dentist from Simi Valley, said he supported the policies of the Trump-Pence administration but thought Trump’s behavior was self-destructive. Pence’s “completely different style” could be a good thing, Ford said, but could also be less forceful than Trump on the world stage.

“He’s more guarded, more of a politician,” Ford, 70, said of Pence. “Does he have the backbone to make his point?”

The Reagan Library series will include upcoming speeches from 2024 hopefuls such as former Secretary of State Michael R. Pompeo and South Carolina Sen. Tim Scott. Former House Speaker Paul D. Ryan gave the kickoff address in May, cautioning fellow Republicans against staking their electoral fortunes “on the populist appeal of one personality, or on second-rate imitations.”