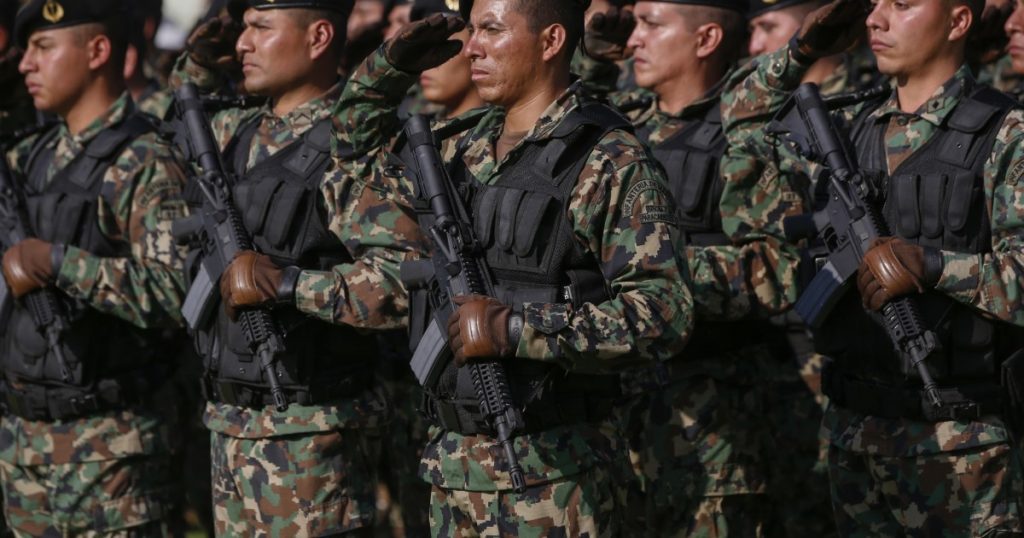 As a candidate for president, Andrés Manuel López Obrador slammed Mexico’s armed forces and the “mafia of power” that he said controlled them. He accused soldiers of human rights abuses in the country’s bloody drug war and publicly clashed with Gen. Salvador Cienfuegos, then secretary of defense.

But after taking office, López Obrador changed his tune, embracing the same military leaders he had once bashed.

After Cienfuegos was arrested at Los Angeles International Airport last month and charged with drug trafficking, the president rushed to his defense, threatening to withhold security cooperation with the United States unless charges were dropped. U.S. authorities caved this week and returned the 72-year-old retired general to Mexico.

It was an unprecedented gift for the nation’s insular but increasingly powerful armed forces.

Traditionally, the military has played a limited role in civilian affairs here, setting Mexico apart from much of Latin America, where coups and military governments were once common.

Under an arrangement set eight decades ago by the then-dominant Institutional Revolutionary Party, the military was left to its own devices so long as it didn’t interfere in governance.

Under López Obrador, that wall has begun to crumble.

The president reneged on his campaign vow to end the military’s involvement in Mexico’s war against drug traffickers while vastly expanding the role of the armed forces in other civilian matters.

Troops now lead the fight against illegal immigration, the COVID-19 pandemic and the widespread theft of fuel from gas lines. They run the country’s biggest infrastructure projects and will soon control the nation’s ports and border crossings.

López Obrador has drawn the armed forces closer in part because they are popular.

Polls consistently show that the navy and army are the nation’s two most trusted institutions, thanks to their humanitarian efforts to help victims of natural disasters. They are seen as efficient, professional and less corrupt than other branches of government.

“He has relied on the military because they work,” said a member of López Obrador’s administration who spoke on the condition of anonymity because he was not authorized to talk to the media.

But perhaps more importantly, the president, a populist who vows to transform Mexico to benefit the poor, has alienated many of the nation’s traditional power players — from its business elite to the opposition parties that retain control of various states and maintain strong constituencies within public-sector unions.

The armed forces are among the few institutions that López Obrador, known as AMLO, can trust.

By elevating them, he has also made himself more reliant on them.

“Everything changed simply because he now depends on them so much,” said Guillermo Garduño Valero, a security analyst.

The deal with the United States, tweeted political analyst Carlos Bravo Regidor, “is more of a triumph for the military than for AMLO.”

Some analysts believe that López Obrador’s presidency has become so inextricably linked to the armed forces that he had little choice but to lobby for Cienfuegos.

Cienfuegos, who led the armed forces from 2012 until just before López Obrador took office in 2018, was accused of protecting drug smuggling corridors and alerting drug bosses to U.S. enforcement actions.

A trial laying out the details could have implicated other military commanders still on duty. Or Cienfuegos might have flipped under U.S. pressure and testified against confederates, placing his former colleagues in danger of imprisonment.

“Cienfuegos couldn’t have done this all by himself,” said Jorge G. Castañeda, a former foreign minister of Mexico. “It was a complex operation. There had to have been other people involved.”

A joint U.S.-Mexico statement explaining the Cienfuegos deal said that he was being released from U.S. custody “so that he may be investigated and, if appropriate, charged, under Mexican law.”

But few in Mexico believe that he will stand trial here. When Cienfuegos arrived in Mexico on Wednesday, he met briefly with officials and then went home a free man.

Critics say the incident highlights the risks posed by the new political order. Many believe the military is also a deeply corrupted institution — just one that hasn’t often been held accountable.

“You’ve had pretty much blanket impunity for human rights allegations and also for issues of corruption,” said Maureen Meyer, a human rights advocate at the Washington Office on Latin America think tank. “Having an armed forces with that much power is really dangerous.”

On Thursday, Mexico said that it will no longer allow officials accused of corruption to be tried in the United States, ending a long tradition in which major drug cases involving crooked officials were held north of the border because of Mexico’s weak justice system, under which the vast majority of reported crimes go unpunished.

“Whoever is culpable according to our laws will be tried, judged and if applicable sentenced in Mexico, and not in other countries,” Foreign Secretary Marcelo Ebrard said Thursday at a news conference with López Obrador.

The Trump administration has not publicly responded to that position.

Such a move would appear to fly in the face of López Obrador’s top campaign promise: that he would tackle corruption.

But the president, a strong nationalist, was livid that U.S. authorities did not disclose the impending arrest of Cienfuegos to their Mexican counterparts until after the fact. The sting violated his closely held belief in non-interventionism, a policy that he frequently cites when he refuses to weigh in on political developments in other countries.

Still, military pressure clearly played into his dramatic push to free Cienfuegos. By some Mexican media accounts, military leaders were so incensed that the president, who is also the commander in chief of the armed forces, feared he might lose control of the institution.

“This will draw the military and AMLO closer together,” said Raul Benitez-Manaut, a professor at the National Autonomous University of Mexico who specializes in national security. “He saved them.”

The bond has drawn increasingly harsh critiques here, though it was the administration of President Felipe Calderón that whetted the military’s appetite for a greater role in civilian matters.

In 2006, he launched the war on drug traffickers and put the military in charge. The move was pragmatic. Calderón doubted the effectiveness of local and state police, who are often on gang payrolls, a fear that has not dissipated despite sporadic efforts to purge and professionalize law enforcement.

But the reliance on the military has come at a steep cost, in part because soldiers are trained for battle, not fighting or investigating crime.

Not only have cartels continued to thrive, but hundreds of thousands of Mexicans have died in a war rife with allegations of human rights abuses, many implicating the military. One of the most egregious cases was the 2014 disappearance of 43 students from a small town in Guerrero state, which occurred while Cienfuegos headed the armed forces.

Cienfuegos denied a human rights commission investigating the case access to troops that had been on the scene, saying he would not permit his soldiers “to be treated like criminals.”

But he has sought to prosecute only low-level soldiers, not the presumed architects of the crime.

“They have chosen symbolic cases but haven’t done much broad work on corruption and human rights abuses,” said Meyer.

López Obrador’s administration has only expanded the military’s role in the drug war.

He followed through on his pledge to create a National Guard, which now has almost 100,000 troops, yet gave the military and navy the responsibility of recruiting, training and funding the new force.

The president also assigned the military a contract to build a new airport outside Mexico City, a project López Obrador championed after he canceled another airport project he said was beset by corruption. The military is also building part of a multibillion-dollar tourist train on the Caribbean coast.

The new projects give the armed forces more independent streams of revenue — and new autonomy.