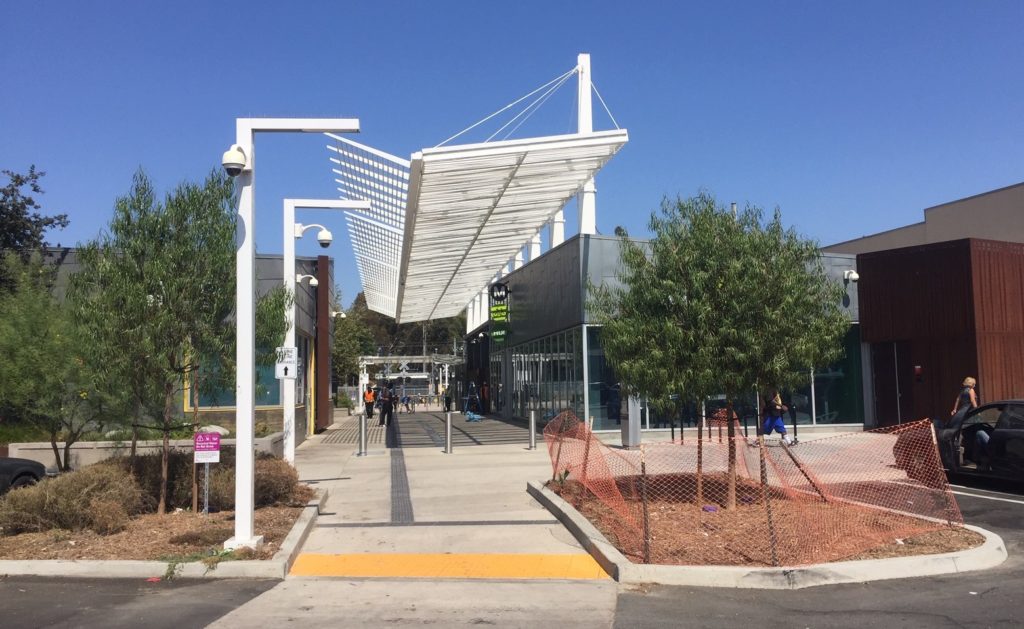 This week, Metro announced that its Willowbrook/Rosa Parks Station improvements project is officially complete. Streetsblog got a chance to visit the site a couple days ago. While there is some final construction still winding down, nearly there years of construction is indeed drawing to an end. While there are many positive aspects of project, there are also a lot of missed opportunities.

At the intersection of the Metro A (Blue) and C (Green) Lines, Rosa Parks Station has long been a busy transfer station. According to Metro, it is the fourth most heavily-used station in the Metro system, serving around 30,000 passengers daily pre-COVID.

The Willowbrook Station area is difficult to make welcoming for pedestrians. The C Line Station is in the middle of the freeway, with all the noise and pollution that that entails. The A Line Station is largely situated underneath the 105 Freeway and also under the adjacent freeway-like Imperial Highway grade separation structure. Access is further reduced by Union Pacific freight rail tracks running immediately west of the A Line. These difficult site conditions combine with a long history of disinvestment that has impoverished the surrounding South L.A. neighborhoods. It’s no small task to make A Line Stations play their roles in righting these wrongs.

Metro’s $128 million Willowbrook/Rosa Parks Station Improvement Project was funded partially via a federal TIGER grant. After an August 2018 groundbreaking, construction at Rosa Parks got into full swing in early 2019, as part of the “New Blue” refurbishments that closed portions of the A (Blue) Line for much of that year.

The project consolidated bus transfers in a revamped bus plaza west of the A Line. The bus plaza is accessed via a new pedestrian crossing at the south end of an extended station platform. Other improvements include added walkways, a new pick-up/drop-off area, expanded park-and-ride, a new Metro Customer Service Center, and new Metro Bike Hub.

While the improvements do make the station setting somewhat better, there are several ways that they fall short of truly prioritizing transit riders, getting to their connections on foot and by bike.

First up: the case of the missing bikeway.

Shared by SBLA back in 2018, the Metro’s site map (included on the latest project fact sheet) shows a roughly 0.2-mile long “new protected cycle track” (also known as a protected bike lane) extending from the southeast corner of the station to its northwest corner.

Metro’s current Willowbrook Station FAQ notes that “In partnership with the LA County Department of Public Works, Metro will be adding a curb-separated bicycle path along Willowbrook Avenue West, stretching from 119th Street to Wilmington Avenue.’ In August 2020, Metro shifted nearly $500,000 worth of Call for Project bikeway funding, originally programmed to L.A. County, to instead “complete the planned bikeway improvements” at the Rosa Parks Station.

But the station project is officially completed now and there’s no cycle track in the Metro portion of the site.

There is a new two-way protected bikeway below the station site, extending south of the station one long block to 119 Street-  about 0.2 mile – to 119th Street.

Streetsblog asked Metro what happened to the planned station bikeway. Metro spokesperson José Ubaldo responded, “The bikeway changes from bike only (south) to a raised sidewalk (north) at the new pedestrian crossing. This was due to site limitations north of the pedestrian crossing and the need for a pedestrian path on the east side of Willowbrook Ave West. The intent was always to have the raised sidewalk be multi-use to allow both bike and pedestrian use. Finally, due to potential transit conflicts as the bikeway approaches Wilmington ​Ave, a multi-use sidewalk was preferred.”

(Sadly this seems to be a trend lately in Los Angeles. Despite cyclists giving input and making sure that bike facilities are included in first/last mile plans and project plans, bike facilities are later quietly omitted from what finally gets built. See SBLA coverage of L.A. City’s Riverside Drive Bridge and North Spring Street Bridge.)

This week, cyclists are indeed riding on the “multi-use raised sidewalk.”

And pedestrians are walking in the two-way protected bikeway south of the station.

People are walking in the south bikeway, because there are no sidewalks immediately south/southwest of the station. You read that right – Metro spent $128 million on improvements at Rosa Parks, and failed to add missing sidewalks on the block where the station is located. It’s as if Metro doesn’t expect its riders to walk.

The first/last mile issues south of Rosa Parks Station are bad – but, as Streetsblog noted in 2015, those pedestrian-unfriendly conditions persist surrounding the station area. At the time, Streetsblog urged Metro to work with the city and the county to address these deficiencies.

Now back to Metro claims that the planned bikeway was skipped “due to site limitations north of the pedestrian crossing.” Is this even true?

Somehow Metro failed to design and build a sidewalk area wide enough for the cycle track – and for people on foot.

Through a short bottleneck stretch, there are some constraints imposed by the large pylons holding up the freeway. That could have been taken into account account in station design.

A bigger part of the problem appears to be that Metro shortchanged walk/bike space in order to dedicate lots of space for private cars – both for park-and-ride and for driving through the bus bay. Metro consolidated its bus bays onto Willowbrook Avenue, but still allows drivers to cut through the station on Willowbrook. Why not, like typical bus bays throughout Southern California (and around the world), keep private cars out? Why not make that half-mile of Willowbrook a bus-only lane? There are no driveways and no destinations for drivers to access (other than Metro’s park-and-ride lot at the very top) on this nearly-half-mile long block of Willowbrook, so drivers now speed through the middle of the revamped station area.

The amount of Rosa Parks Station space dedicated to cars and driving is baffling, given what a small role cars play in riders accessing Metro transit. According to Metro rider surveys (most recent example), more than 75 percent of riders arrive at Metro on foot. Just below ten percent of Metro riders are dropped off, and around five percent drive and park. These are systemwide figures; for low-income communities of color, including Watts/Willowbrook, the percentage of riders walking is even higher, and driving is lower.

Watts and Willowbrook are communities where lots of folks get around on foot and on bike. It is very common to see folks bringing bikes onboard the A and C Lines. Metro’s Willowbrook/Rosa Parks Station Improvement Project was likely a once-in-a-couple-of-decades opportunity to transform a polluted unwelcoming space into one that truly prioritized transit riders. While the project fell well short of that mark, the station remains heavily used by riders, heavily walked, and seeing quite a bit of bicycling. Metro should continue to improve conditions for these riders.

Here are a few steps Metro might take to continue to improve the rider experience at Rosa Parks Station:

Readers – what do you think of the Rosa Parks Station revamp? Especially for folks who use this station, what steps would you look to to improve the rider experience there?