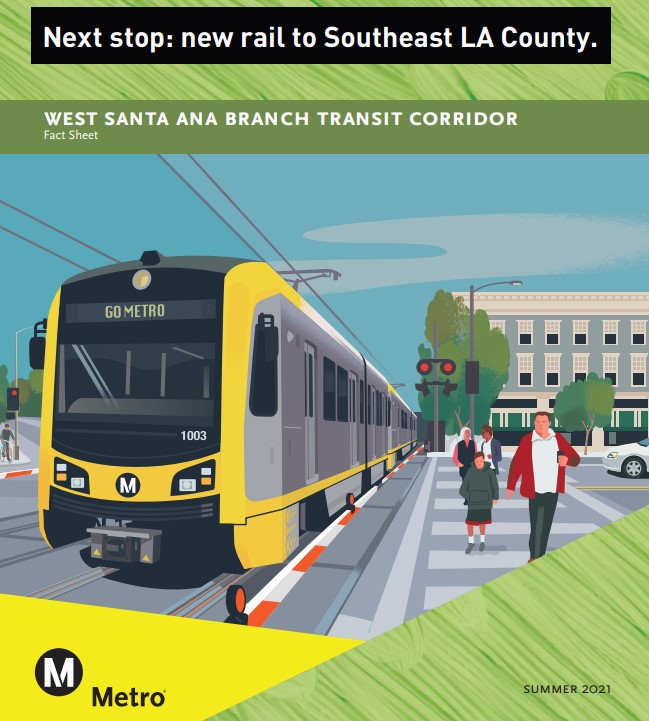 The West Santa Ana Branch is an unused rail corridor running through southeast Los Angeles County. The nearly 20-mile rail line is planned to extend from downtown Los Angeles, connecting into the Southeast cities – Vernon, Huntington Park, Cudahy, Bell, South Gate – and continuing on to the cities of Downey, Cerritos, Bellflower, and Artesia. The project overlaps with part of the existing A (Blue) Line, but is planned to run on separate tracks. WSAB would connect with the Metro C (Green) Line at a new transfer station on the 105 Freeway near Garfield Avenue, just east of 710 Freeway.

Metro has funding for the West Santa Ana Branch Transit Corridor via Measure M, where the project was expected to be broken into two phases. About $535 million is available for a 2022 groundbreaking with an opening date in 2028; this was originally anticipated to extend from from the C (Green) Line to the southeast terminus at Pioneer Boulevard in Artesia/Cerritos. Measure M has an additional $900 million for a second phase anticipated to open in 2041. Measure M anticipates additional funding for the project – with the initial phase costing about $1 billion, and the second phase costing about $3 billion.

Metro’s environmental documents evaluate four alternatives (shown on the map above), which mostly differ in what phasing gets built when. Outside of downtown L.A., all the alignments are identical. Downtown, the northern terminus could still be 7th/Metro Station or Union Station, where there are two different possible approaches.

For reasons which have never been made clear, Metro continues to omit any kind of subway-compatible rail option for the line. As SBLA previously reported, this choice by Metro has resulted in a more expensive and complex project that will take longer to build, have lower capacity, and will build in a forced-transfer in downtown Los Angeles – all diminishing the line’s utility.

For additional coverage on the release of West Santa Ana Branch environmental studies, see posts at The Source and Urbanize.