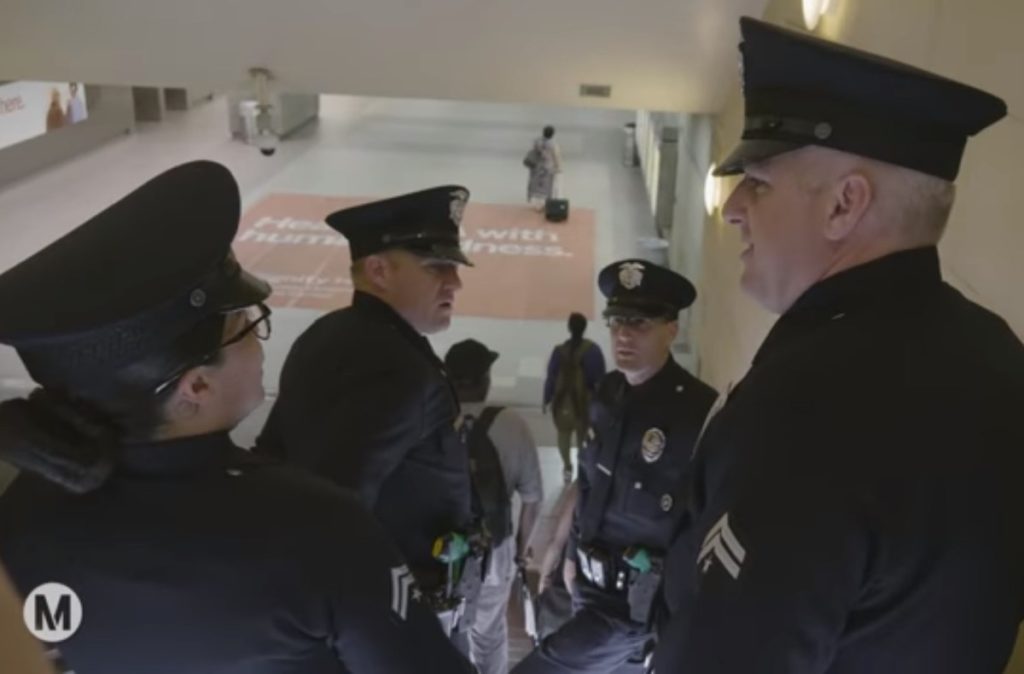 Two truly awful proposals before the Metro board this week point to a serious disconnect between Metro staff leadership and the agency’s fairly progressive board leadership. These will both be heard at the Thursday, February 25 Metro board meeting, which starts at 10 a.m. Find details at the meeting agenda.

Metro staff are recommending that the Metro board:

Many on the Metro board and in the public are scratching their heads on Metro doubling down on discriminatory practices at a moment when they had pledged to address the agency’s historic role in perpetuating that kind of harm.

That’s pretty much all you really need to know…

Though, here are a couple ways to get involved. See the Alliance for Community Transit (ACT-LA) action alert toolkit – including advice (in Spanish and English) on how to weigh in over email, or at the virtual meeting on Thursday. Attend a socially-distanced rally hosted by the Bus Riders Union – this Wednesday at noon.

And below is a bit more background detail.

What the Metro board approved:

In 2017, the Metro approved a five-year ~$130 million/year multi-agency contract paying LAPD, County Sheriffs (LASD), and Long Beach Police (LBPD) to police its transit system. These contracted police criminalized poverty, over-policed code-of-conduct violations, and, in one particularly horrific incident, Long Beach Police detained 23-year-old César Rodríguez for fare evasion, searched him to see if there was some other charge they could levy against him, and then got into a physical altercation with him near the edge of the platform as a Blue Line train rolled into the station. Rodríguez was killed after being crushed between the train and the platform. Metro and LBPD have yet to offer the family any answers regarding the 2017 case.

(In the lead-up to the approval of the 2017 policing contract, there was no meaningful engagement around what  “safety” and “security” would look like in practice, or whose “safety” and “security” would be prioritized. Instead, official conversations around the contract had focused on whether Metro had been getting its money’s worth out of the Sheriffs and the extent to which the multi-agency contract would offer Metro “more security for less dollars,” as Metro CEO Phil Washington put it at the time. For their part, Metro boardmembers spoke of how greater visibility and saturation on transit would yield improved response times and greater security.)

In response to those unacceptable patterns of law enforcement behavior, and in light of last summer’s Black Lives Matter protests (and Metro’s shameful response to them), the Metro board set in motion a process for the agency to “reimagine public safety.” Among several policing reform motions approved in June 2020, the farthest reaching directive (by boardmembers Mike Bonin, Eric Garcetti, Janice Hahn, Jacqueline Dupont-Walker, and Hilda Solis) instructs Metro to shift to a “community safety approach” for transit security, as the agency’s policing contract renewal approaches in 2022. The motion calls for Metro to shift resources away from an armed response, instead focusing on services and outreach.

Metro security leadership have dragged their heels on setting up the board-mandated committee to oversee the agency’s transition to a community safety approach. The committee members were due to be announced at the end of December 2020. Crickets.

Perhaps they were busy preparing this month’s bombshell: Metro policing leadership asked for $110 million (staff report) to cover cost overruns on their current contract. The LAPD, LASD, and LBPD overshot their Metro contract by seventeen percent.

At last week’s board Operations Committee meeting (see SBLA Twitter thread or Metro meeting video), Metro Chief System Security & Law Enforcement Officer Robert Green more or less issued an ultimatum to the board: approve paying for this $110 million overrun or run out of funding to pay for Metro policing in May or July.

Green repeatedly claimed additional funding was needed due to “quality of life issues,” outreach to unhoused riders, and sexual harassment – the very issues that the board had recommended be handled by unarmed outreach staff. Green closed his remarks with the common law enforcement refrain, “We gotta protect the victims.”

The request was not well-received by the boardmembers on the committee; both Bonin and Sheila Kuehl made the point that, for greater safety on the system, Metro should focus on restoring transit service, which will bring back ridership. The committee did not approve the item, but postponed it to the full board meeting.

Investing in Place described the Metro policing situation in detail in a very informative blog post, titled, Metro Overspent Its Policing Budget By How Much?!:

Let’s not mince words. Metro has to ask for an increase in its contracts with the Los Angeles Police Department, the Long Beach Police Department and the County Sheriff because the original contracts were egregiously generous and because the agency’s approach to policing mirrors the systemic failures we’ve seen elsewhere; namely, overly generous contracts with little oversight, insufficient accountability mechanisms, and an over-reliance on police overtime.

There is no other category of spending that could exceed its budget by this much without the Metro Board raising serious questions about the program’s sheer fiscal irresponsibility.

Investing in Place points out that Metro security are asking for $110 million right now, as well as an extra $80 million six-month contract extension and whatever cost overruns accompany it.

What the Metro board approved:

Last September, facing a COVID recession budget shortfall, the Metro board approved an overall twenty percent cut to transit service. At the time, the board (in a motion by directors Bonin, Garcetti, Hilda Solis, Robert Garcia, and Kuehl) directed staff to restore transit service ahead of schedule if any new operations-eligible monies became available.

Last month, sales tax revenue was better than expected, so Metro found some unanticipated money in its mid-year budget. Metro Operations leadership initially ignored the prior board direction and made plans to spend the additional money without running any additional service. The board rejected the operations staff plan, instead approving an additional $24 million for restored service, and directing Metro operations to restore Metro transit service to pre-COVID levels by no later than June 30, 2021.

As noted, last month, Metro operations staff ignored last year’s directive, and bent over backwards to avoid restoring any transit service. That is, until the board effectively shouted “Do it!”

This month, Metro operations delivered an informational report outlining the reasons that they won’t meet the board’s June 2020 deadline for restoring service, instead pushing back restoration to December 2021.

The staff report reads like an Onion parody. The most ridiculous reason Metro operations staff cited?: Restoring service to pre-pandemic levels would “create confusion and frustration for customers.”

Instead of Metro operations leadership treating their board and their riders like idiots, they need to get busy restoring service. At a time when essential workers have, at great cost, risen to serve the health and well-being of all Angelenos, Metro Chief Operations Officer James Gallagher has stuck his head in the sand. In September and again in January, the Metro board directed Gallagher to restore transit service. His response in January was to complain that Metro couldn’t hire enough drivers – to operate the service that Metro was operating just one year ago. This month, instead of announcing that Metro is already hiring – something that sounded like it was right around the corner in January, and much needed when many Angelenos are looking for work – Gallagher stated that Metro is still getting ready to start hiring new drivers.

If Gallagher is not competent enough to restore Metro service to the same level it was at just one year ago, maybe the board needs to hire someone who will.

Read more coverage of the latest Metro Operations delays at this excellent Investing in Place post.

Due to a lack of time, the service level item was not discussed in committee, but pushed to the full board meeting.