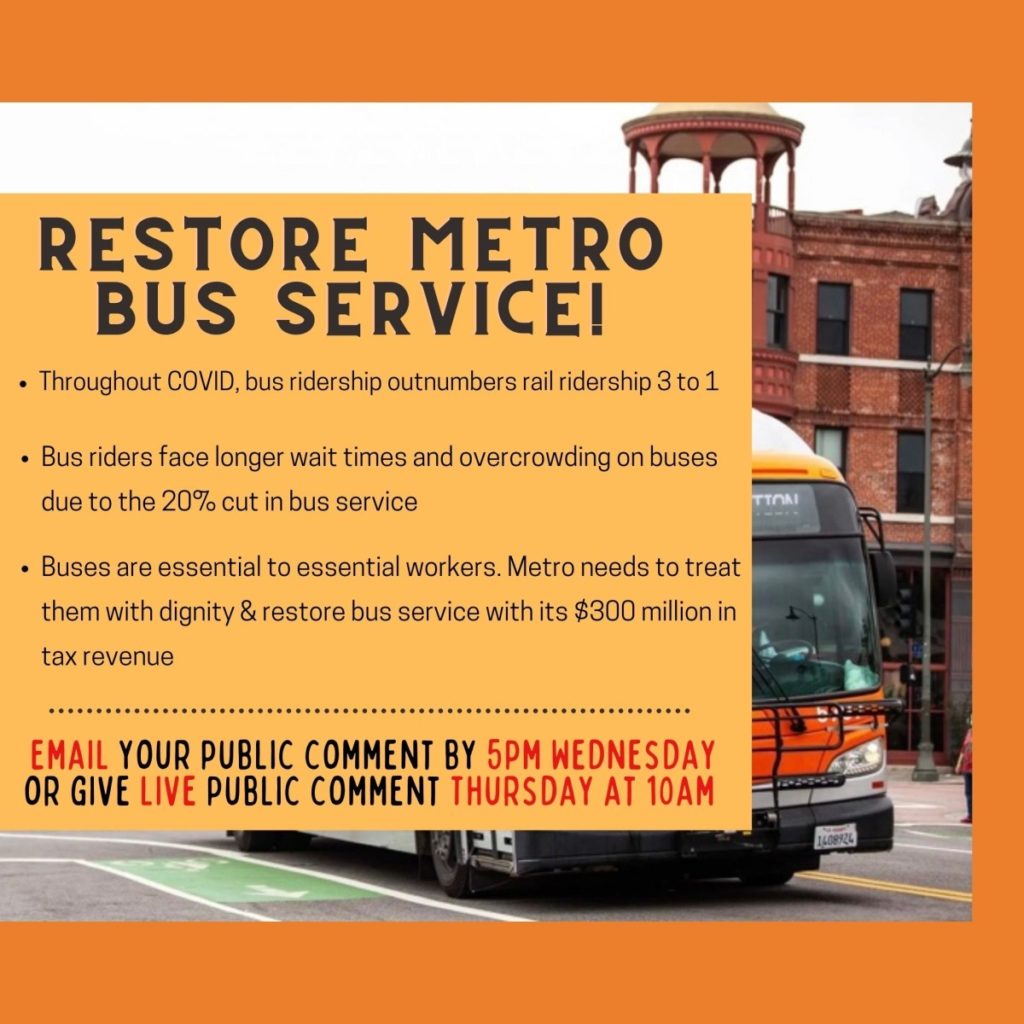 Today, the Metro board of directors voted to spend millions of dollars to restore transit service that had recently been slashed.

Metro recently found that funding is available, as recent sales tax revenue was nearly $300 million more than Metro’s budget projections. Metro staff proposed mid-year budget adjustments adding back nearly $800 million to the remaining fiscal year budget. Much of this funding is not allowed to be used to fund operations – only $58.6 million was available to fund bus service. But Metro’s staff proposal directed none of this to transit operations.

Transit advocates got wind of Metro’s no-new-service proposal; they weighed in urging the Metro board to fund restored bus service.

Absolutely! Essential workers should have plenty of space on buses in order to travel safely. Not to mention reliable service. This is an urgent situation! https://t.co/OxDiwPubTo

Five Metro directors – Eric Garcetti, Mike Bonin, Hilda Solis, Janice Hahn, and Robert Garcia – responded to the public outcry, authoring a motion to redirect $24.3 million towards restoring transit service “with priority for high-ridership lines and an emphasis on disadvantaged communities.” In addition, the motion calls for restoring service to pre-COVID levels by no later than the end of the fiscal year (July 30), supporting vaccination of Metro’s workforce, ensuring safety for Metro workers, and offering transportation assistance for getting people to vaccination appointments.

In the board discussion at today’s meeting, Bonin, who has been a leading voice for transit riders, stated that there is “no greater need for this agency than to restore service.” Hahn rebuked Metro staff for not addressing the board’s clearly expressed priority of restoring transit service. Several directors emphasized the need for Metro transit service to support essential workers, especially as the region gradually recovers from COVID and transit ridership returns.

The board unanimously approved the motion.

Metro riders are unlikely to see an immediate uptick in service. Metro’s already-slashed operations have been impacted by COVID, with illness resulting in increased absenteeism and missed bus runs. There is a lag time for Metro to hire and train new staff, and to ramp operations back up.

Investing in Place rightly called today’s action “no small victory” but stressed that it is “not the end of this fight.” Though $24 million will make big difference in the lives of Metro’s riders, it is not even enough funding to even restore service to the same level it was at just one year ago.