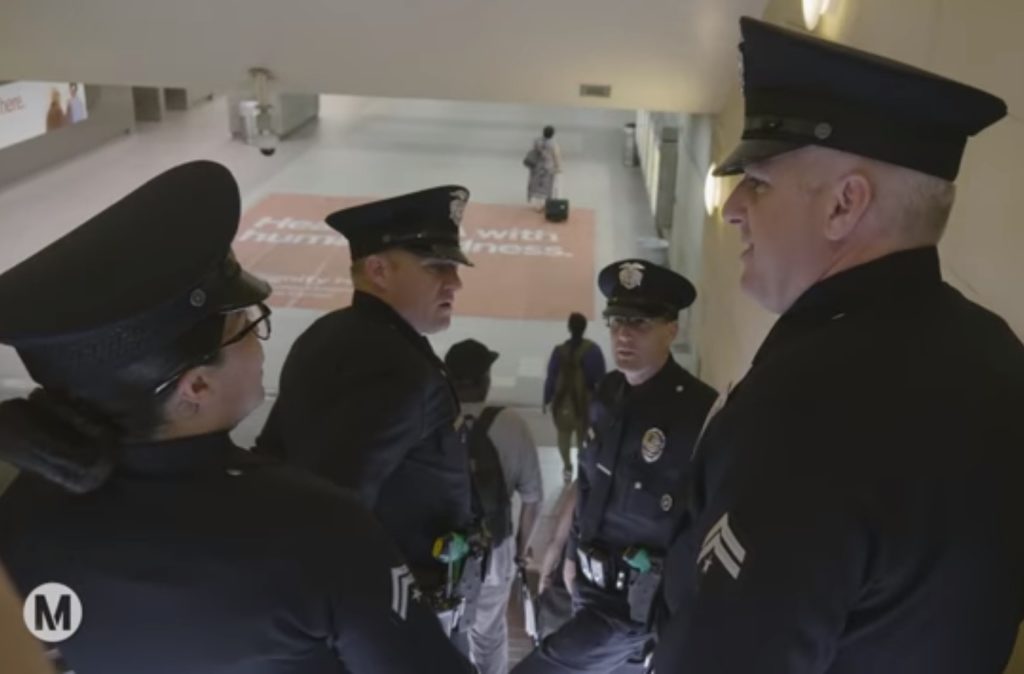 Don’t do it, Metro. Don’t settle for more punitive policing-as-usual. Don’t waste any more time in making good on your promises to reform transit policing.

Many Streetsblog readers are familiar with Metro’s current problematic transit policing – contracted to LAPD, L.A. Sheriffs Department, and Long Beach Police Department – all of which have problematic policing incidents off of transit, too. SBLA Communities Editor Sahra Sulaiman has covered Metro patrols’ criminalization of poverty, and has questioned who Metro has been making spaces “safe” for. Data made public in 2016 showed nearly 60 percent of those arrested by sheriffs on Metro rail were Black, despite comprising only 19 percent of rail ridership. The bulk of these Metro citations were for low-level quality-of-life violations, and many of those cited were unhoused. In one particularly horrific incident, Long Beach Police rolled 23-year-old César Rodríguez in front of a Blue Line train that crushed him to death. LBPD had detained Rodríguez for fare evasion, then searched him to see if there was some other charge they could levy against him, and then got into a physical altercation with him near the edge of the platform just as the train came into the station.

Last summer, the killing of George Floyd by Minnesota Police sparked nationwide protests and a much-needed national debate on policing, systemic injustice, and how to heal communities.

In June, Metro put out its “statement on Black Lives Matter and our commitment to fighting racial injustice” which reflected “on the role we [Metro] play in creating an equitable and just Los Angeles area.” Metro acknowledged police killings – “Metro joins everyone in mourning the lives of George Floyd, Ahmaud Arbery, Breonna Taylor and so many others who needlessly lost their lives to police brutality” – and even the agency’s role in inequitable transit policing, stating, “Fare enforcement too often targeted Black and Latino young men.”

That same month, the Metro board followed up by setting in motion to a process for the agency to “reimagine public safety” in the transit policing context, including shifting resources away from an armed response, and instead focusing on services and outreach.

Since June, Metro transit policing leadership has been dragging its heels on getting the reform process underway. The process is supposed to be led by the board-mandated Public Safety Advisory Committee. That committee was due to start meeting in January, then was supposed to meet this week… but has since had its first meeting postponed until April.

In the meantime, law enforcement are hoping that the public and the Metro board have short memories. Metro transit police leaders have doubled down, proposing that the board approve additional funding for cost overruns on their current contract. In February, Metro policing higher-ups sought an immediate $110 million allocation (part of a somewhat opaque $200+ million request) over above their approved five-year contract. When the board balked at approving the item, the request was trimmed to just $36 million extra to pay for policing-as-usual through December 2021.

Tomorrow, the full Metro board is scheduled to vote on the $36 million policing request.

Tomorrow is the day that the Metro board needs to take a stand. Streetsblog L.A. urges boardmembers to vote no to funding the perpetuation of systemic injustice.

Metro can’t afford to keep throwing money at a form of policing that contributes to the criminalization of its core ridership and deepens existing inequities. Tomorrow, the board has a chance to uphold the principles it claims to hold dear and play that “role in creating an equitable and just Los Angeles area.”

Every new dollar diverted to policing is a dollar taken away from real steps toward making Metro truly safe and welcoming to all.

If Metro really has $36 million to spend on system safety (and they do – especially with more than three billion dollars’ worth of federal COVID stimulus monies targeted toward operations), then here are some better programs to spend it on (SBLA acknowledges the Alliance for Community Transit (ACT-LA) and their recent report, Metro as a Sanctuary: Reimagining Safety on Public Transit, which outlines these and many other successful programs for equitable transit safety):

Streetsblog urges you, Metro board, to take a stand tomorrow. Reject giving more money to problem policing. Metro’s system will be better off if you do. Metro’s riders will be safer if you do.

Added 3/25: To follow the board meeting and make public comment, see ACT-LA’s Action Alert Toolkit and Bus Riders Union/Fight for the Soul of the Cities Call to Action.