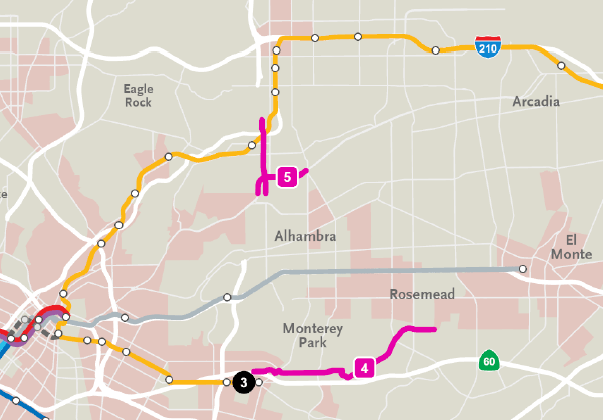 Last Thursday, the Metro Board of Directors approved 16 active transportation projects across the county, including two San Gabriel Valley projects – in Monterey Park and South Pasadena.

This is the first round of funding awarded through the Metro Active Transport, Transit and First/Last Mile (MAT) program, which is funded through Measure M and is expected to invest more than $857 million over the next 40 years into active transportation projects. Thursday’s decision by the board approved more than $63.1 million to five active transportation corridor projects and eleven first/last mile projects.

Twenty-eight proposals were submitted in this year’s cycle totaling $102.7 million. Eight projects totaling $16 million were recommended to be placed on the wait list in case additional funds become available.

MAT submittals were not required to have prior planning completed, which is uncommon in most competitive funding programs. Projects will be able to got through an initial scoping phase to arrive at the budget needed to complete the full project.

Metro staff is expected to return to the board annually to seek approval on program funding amendments as project scopes are developed and refined and to allow for other adjustments in programming.

This project is broken up into two sections:

The city’s bike master plan has designated a bike lane for Huntington Drive and a bike route for North Fremont Avenue.

The project is proposed to eliminate existing and potential conflict areas by upgrading ADA paths of travel, implementing bike improvements approved in the bike master plan, improving intersection functionality, and providing a safe transition between corridors.

Both projects are still in the conceptual phase will most likely require more planning and community engagement efforts, said Metro spokesperson Dave Sotero.