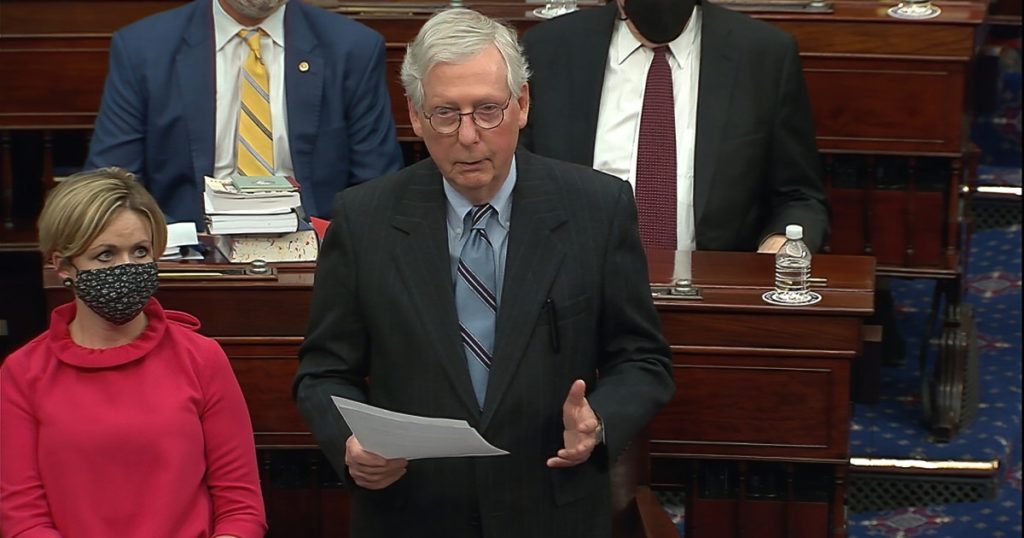 Now the measure, in all likelihood, will go to the Senate to die.

But wait, you may ask — don’t Democrats have a majority there?

They do — a razor-thin majority of 50 seats plus Vice President Kamala Harris. But that doesn’t mean they can pass any bill they like.

Under the rules of the 100-member Senate, it takes 60 votes to end debate and move most bills to a vote. That’s the filibuster rule.

A filibuster used to mean a senator actually had to stand and speechify, refusing to give up the floor and thus keeping a bill from coming to a vote. But in recent years, senators have waived that burdensome requirement; now they can block a bill simply by threatening to speak. So they do, increasingly often.

This month, Mitch McConnell of Kentucky, the Senate Republican leader, promised to use the filibuster to block the election reform bill, which is seen as favorable to Democrats because it would make voting easier. He has made clear he won’t be shy about filibustering other pieces of President Biden’s agenda as well, including a $15 minimum wage, immigration reform and proposals to curb climate change.

So Biden and his Democrats face a choice: Do they watch helplessly as McConnell, a master of obstruction, blocks the new president’s priorities? Or has the moment come to finally scrap the filibuster, a time-dishonored piece of Senate tradition that many senators (and at least one former senator, Biden) say should be preserved?

The original idea behind the filibuster rule was kind of charming. Requiring a supermajority of 60 senators to bring a measure to a vote was supposed to promote broadly acceptable compromises instead of partisan measures that might squeak through with a narrower majority.

But that’s not how the rule has worked in recent years. As the Senate has become increasingly polarized along partisan lines, the filibuster has become a weapon that enables the minority party to obstruct rather than negotiate.

An increasing number of Democratic leaders, including former President Obama, former Senate leader Harry Reid of Nevada and Senate Rules Committee Chair Amy Klobuchar of Minnesota have called for scrapping the rule. So have many progressive leaders, frustrated that a seemingly arbitrary hurdle stands in the way of Biden’s most ambitious proposals.

But that won’t happen. Senate Democratic leader Charles E. Schumer of New York doesn’t have 50 votes lined up to change the rule.

At least two Democratic senators, Joe Manchin III of West Virginia and Kyrsten Sinema of Arizona, say they are dead-set against scrapping the filibuster.

“Jesus Christ,” Manchin shouted last week at reporters who asked if he might change his mind. “What don’t you understand about ‘never’?”

Manchin and Sinema have several reasons to dissent from their party. They’re both centrist mavericks, not progressives. Both say they like the idea of forcing the Senate to seek bipartisan compromise. Both may reasonably be suspected of enjoying the fact that the rule makes them more powerful.

And they both represent relatively conservative states; they aren’t going to change their views because progressives on Twitter denounce them as DINOs — Democrats in name only. So Biden and Schumer need to take their views seriously.

But there’s another solution: Reform the filibuster instead of scrapping it.

Offer Manchin and Sinema what they say they want: a Senate where centrists like them have a chance to negotiate compromises more often.

The filibuster, as currently practiced, doesn’t achieve that goal. Under McConnell, it has made the chamber a graveyard for legislation.

In a narrowly divided, polarized Senate, the 60-vote rule is probably too high. In a 50-50 Senate, it requires 10 mavericks to defy their party’s leader, and these days there aren’t that many free spirits on either side.

Norman Ornstein, an expert on Congress at the American Enterprise Institute, recently offered several ways to fix the rule without scrapping it. One would be to simply lower the filibuster threshold to 55 votes instead of 60. Another would be to flip the way the rule works and require 40 senators to show up to stop a bill, instead of putting the burden on 60 to move it forward.

“The point is to restore the original idea of the filibuster — to foster more debate,” Ornstein told me. “Right now, the burden is all on the majority. If you want more bipartisanship, the probability you’ll get it will increase if there’s an incentive to actually legislate.”

If Biden wants to save his agenda from gridlock, he may need to invite Manchin and Sinema to the Oval Office, remind them that he shares their love of Senate tradition and enlist them in a campaign to foster more bipartisan compromise — beginning with changes to the filibuster rule.