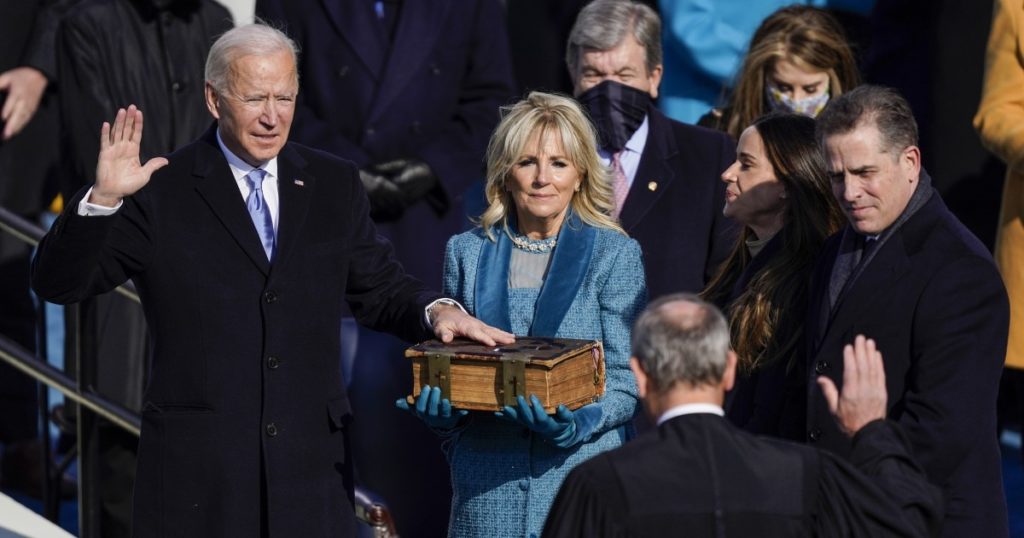 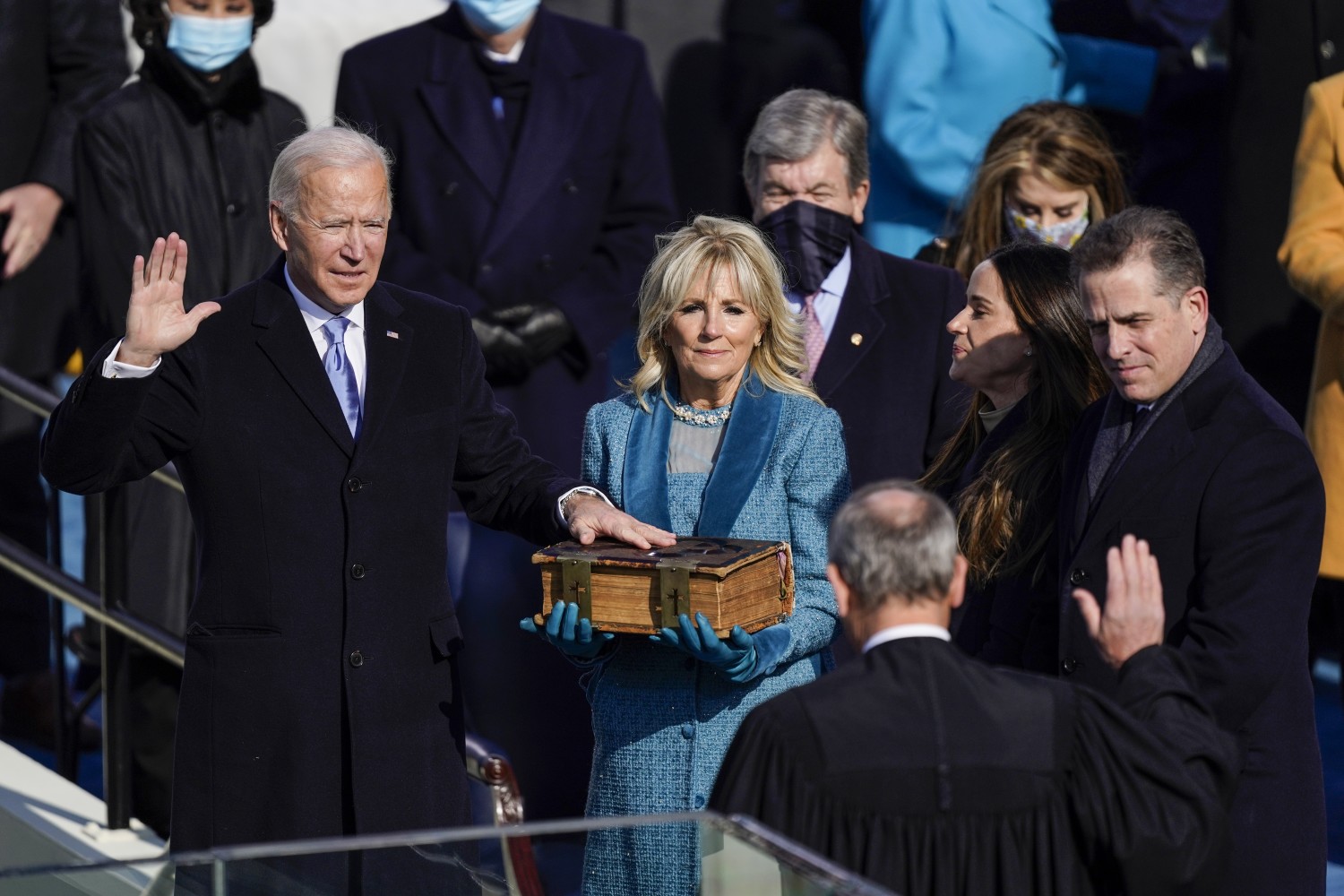 In Sydney, Australia, Lucy Sunman crawled out of bed at 3 a.m. so she could watch the inauguration of President Biden live.

“The chilling effect of the Trump presidency has impacted us around the world,” said Sunman, a 36-year-old lawyer. “I cannot wait for some stability to be restored.”

In Seoul, 70-year-old Park Sang-ki sat in his cramped printing shop across the street from the U.S. Embassy reading online news reports about President Trump’s departure from the White House.

“America was supposed to be an advanced nation, gentleman-like,” said Park. “Trump, he was like a gang boss.”

In Berlin, Yvonne Wagner cracked open champagne to celebrate “the moment we’ve all been waiting so long for.”

“The clown is finally gone,“ said Wagner, a 52-year-old secretary.

As Biden took office Wednesday, vowing to unify a nation riven by caustic political divisions and a deadly pandemic, the rest of the world watched closely too. Many were focused less on Biden’s ascension than on the departure of Trump, a larger-than-life character who relished disrupting the status quo at home and abroad and who will be remembered as one of the most controversial presidents not only in American history, but also globally.

Images of Trump supporters attacking the U.S. Capitol this month had illuminated just how damaging his presidency had been, she said.

“It’s almost as if we witnessed the downfall of America, a country so often viewed from World War II onward as the leader of the free world,” Ngiow said. “There’s no credibility to it anymore, no more accountability, and it will definitely be an uphill battle for Biden to repair the damage Trump has done.”

A Pew Research Center survey of people in 32 countries conducted before last year’s presidential election found that 64% of respondents did not have confidence in Trump to do the right thing in world affairs.

A staunch nationalist who frequently spoke of putting “America first,” he pulled out of global agreements, curbed legal immigration and sparked a trade war with China.

Biden, a longtime member of the Senate Foreign Relations Committee and vice president under President Obama, is widely viewed as a known quantity who will be more predictable than his predecessor on many issues, including foreign policy.

He has vowed to be an active world leader. Among his first acts Wednesday were moves to rejoin the Paris climate accord and reverse Trump’s withdrawal from the World Health Organization.

Biden has said he will convene a global summit of democracies to counter a rise worldwide of authoritarian leaders.

“There is a need for a reengaged United States,” Canadian Prime Minister Justin Trudeau said last week, adding that a Biden administration represents a major change from the “slightly more unpredictable and sometimes challenging” one that proceeded it.

Others cheered the entrance to the White House of Vice President Kamala Harris. No woman has risen higher in American politics.

Harris, who is Black and Indian American, has become a symbol of hope in India, where some of her family members live.

“I cannot help but feel proud,” said Watsal Yadav, a 23-year-old who sells tomatoes, eggplant and fragrant bunches of cilantro on a busy street in Mumbai.

“America is a powerful country in the world, and now one of us is leading it.”

“Ireland takes great pride in inauguration of Joe Biden,” tweeted Simon Coveney, the nation’s foreign minister. “We hope to welcome him to his ancestral home early in his Presidency.”

Iranian President Hassan Rouhani excoriated Trump at a Cabinet meeting Wednesday, saying that his tenure as U.S. president was “replete with cruelty and law-breaking” and welcoming that it is “now over.”

It was an unlikely about-face for López Obrador, a left-wing nationalist who as a candidate for president criticized Trump for his derisive comments about Mexican immigrants in the U.S. and who wrote a book demanding respect for Mexico called, “Listen, Trump.”

But the world leaders became improbably close allies. López Obrador waited six weeks to congratulate Biden on his victory and defended Trump when he was booted from Twitter after the attack on the U.S. Capitol.

Many analysts see conflict ahead for the U.S. and Mexico, in part because López Obrador and Biden have very different opinions on climate change, renewable energy and security cooperation.

Brazilian President Jair Bolsonaro, a right-wing nationalist who modeled himself closely after Trump, is also lamenting his departure. But analysts say the rise of leaders such as Bolsonaro means Trump’s influence isn’t going away.

“Trump’s gone, but the [populist wave] isn’t,” tweeted Brian Winter, vice president for policy at the Council of the Americas think tank.

Some people watched Biden’s inauguration with skepticism, unsure whether the change in the White House would translate to a shift in policy.

In China, Talia Yan, a 21-year-old college student, said professors had explained that it didn’t matter whether Biden or Trump was president.

“Honestly, none of them will be especially supportive of China,” one professor said.

“No matter what, they are going to try to push China down,” said Yan, snacking on steamed buns at Yaoji Fried Liver, an old Beijing breakfast shop that Biden visited in 2011 as vice president. “We need to keep our defenses, not drop them just because Biden is here.”

Others said the end of the Trump presidency was a time for reflection.

Nicolas Richter, the editor of the newspaper Sueddeutsche Zeitung in Munich, Germany, wrote in an editorial that Trump’s exit was “the best news of the year.”

But he said it had also revealed important truths.

“For a long time, Western democracies saw existential threats posed mainly from abroad,” he wrote. “Trump has shown that these threats now lurk mainly at home. His rise and chaotic presidency are a modern warning against autocracy.”