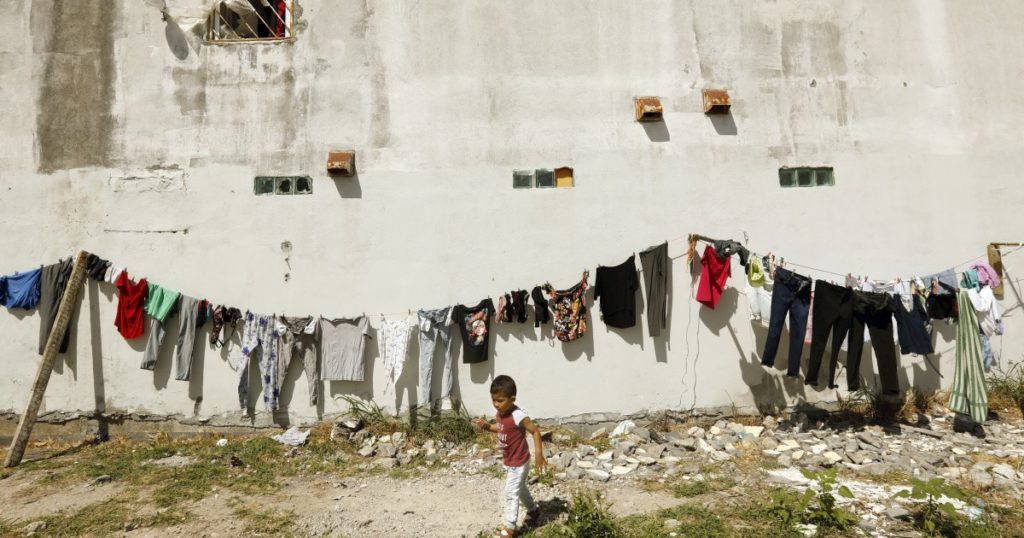 Carmen Ochoa’s three children each live in a different country.

Two years ago, the cook from Honduras left her 10-year-old daughter, Greyvy, with her mother in their native land, where her husband, a police officer, was killed in 2008. Ochoa and her two eldest children claimed asylum at the border bridge from Matamoros to Brownsville, Texas, and were sent back to Mexico to await the outcome of their immigration case under President Trump’s “Remain in Mexico” policy.

Ochoa lived in a tent camp at the foot of the border bridge, unable to work legally in Mexico or to send her children to school there. On Jan. 27, 2020, her asylum claim was denied by a U.S. immigration judge. Unable to afford an attorney, she didn’t appeal.

Instead, about two weeks later, she sent her 13-year-old daughter, Julissa, across the border bridge alone, as other migrant parents at the camp had. By law, unaccompanied minors can claim asylum at border bridges legally, and are allowed to enter the U.S. and remain as their immigration cases progress. Julissa was sent to stay with family friends in Los Angeles.

Like thousands of others who have been subjected to the “Remain in Mexico” policy, Ochoa has stayed with her 16-year-old son just south of the border, eventually hoping that incoming President Biden would reverse course and give them a chance to enter the U.S. legally, instead of crossing the Rio Grande with a smuggler. But so far, the U.S. Customs and Border Protection agency is still expelling most migrants under a Trump policy indefinitely closing the border during the pandemic to “nonessential” travel, though the Biden administration in February announced it would exempt unaccompanied children.

“I don’t want to cross the river because I’m worried they will deport me,” Ochoa, 32, said recently as she sat with her son in a Matamoros park.

“I don’t know what we will do. I just want him to have opportunities, and if we stay here in Mexico, he won’t.”

Remain in Mexico, launched in January 2019, required asylum seekers who passed through Mexico on their way to the U.S. to stay there while their claims were processed in U.S. courts. Previously, migrants could wait in the U.S. for a court decision, which often takes years.

During his campaign, Biden vowed to end Remain in Mexico and empty the makeshift Matamoros border camp. On his first day in office, Biden suspended new enrollments to the program, which by then included more than 71,000 migrants.

Since February, his administration has allowed 25,000 migrants subjected to Remain in Mexico with pending asylum claims to register to get coronavirus testing, cross the border and stay in the U.S. legally while their cases progress. U.S. Customs and Border Protection has worked with Mexican immigration officials to close the Matamoros camp, allowing some whose asylum claims had been rejected to enter the U.S. and persuading 50 others to move to nearby shelters run by churches and nonprofits, promising their cases would be revisited.

So far, though, only about 1.5% of migrants subjected to Remain in Mexico have been granted immigration relief in the U.S., according to TRAC data from Syracuse University. As of this week, 17,515 migrants with active Remain in Mexico cases had registered and 9,492 of them had entered the U.S., according to the United Nations High Commissioner for Refugees in Mexico and the International Organization for Migration in Mexico. So about 38% of migrants eligible to cross have entered the U.S., 13% of the total migrants subject to the policy.

Some returned to their home countries while others continue to wait in Mexico, including some of the roughly 42,000 who had their asylum cases closed by U.S. judges, according to the Department of Homeland Security. They’ve been encouraged to hear Biden administration officials say they would dismantle the policy — also known as the Migrant Protection Protocols, or MPP — in stages that could ultimately allow them to enter the U.S. legally.

“The system to process individuals with active MPP cases is the first phase of a program to restore safe and orderly processing at the southwest border,” Homeland Security spokeswoman Sarah Peck said this week.

Peck said that the administration has no plans at the moment to allow migrants whose Remain in Mexico asylum claims were rejected under Trump to enter the U.S., unless U.S. immigration officials working with United Nations teams to screen migrants at the border deem them “highly vulnerable.”

“The Biden administration has made it clear that our borders are not open, people should not make the dangerous journey, and individuals and families are subject to border restrictions, including expulsion,” Peck said.

Joyce Noche, director of legal services for adult representation at Southern California-based Immigrant Defenders Law Center, said the center represents several migrants in Remain in Mexico cases whose asylum claims were rejected after they failed to attend U.S. immigration court because they had been kidnapped or suffered pregnancy complications.

Aaron Reichlin-Melnick, policy counsel for the Washington-based American Immigration Council, said advocates are pushing for migrants whose asylum claims were rejected under Trump to have them reconsidered, because “even those who managed to get before a judge didn’t have a fair chance.” He said the Biden administration should admit more of the asylum seekers to the U.S. faster.

“There are still thousands of people waiting in Mexico with pending cases and people with closed cases who have a lot of uncertainty about whether they will be allowed in,” Reichlin-Melnick said. “It’s pushing people into the hands of the cartels and making them desperate.”

Homeland Security officials pointed to the number of migrants in Remain in Mexico admitted to the U.S. as a sign the program is being efficiently dismantled, and added in a statement, “We strongly discourage anyone from approaching the border without proper documentation or instructions to present themselves at a specific port of entry. Individuals who attempt to cross illegally are putting themselves and their families at risk, especially during a global pandemic.”

Some of those waiting in Mexico — including LGBTQ migrants and families with children — have been threatened, assaulted and kidnapped. Some have considered crossing the border illegally at a time when such crossings have already surged, especially by families and children.

An LGBTQ couple from Cuba awaiting the outcome of their U.S. asylum cases in Matamoros for two years said they had to temporarily stay with friends in Mexico City in February after they were threatened — by phone and graffiti — and faced extortion for being LGBTQ.

Marialy Casilla, 26, has a pending U.S. asylum claim. The case of her partner of six years, Dany, who is transgender, was rejected after they went to Mexico City in February. In an interview, Casilla said she couldn’t imagine crossing the border alone and leaving behind Dany, 23, who asked to be identified only by first name due to safety concerns. So they returned to Matamoros in March to plead unsuccessfully with U.N. human rights officials processing Remain in Mexico admissions to the U.S., arguing that they were both vulnerable.

“I can’t go without her,” Casilla said as they sat together in a Matamoros park recently. “If she’s alone, it will be worse for her.”

On Tuesday, Casilla received a call from the U.N. High Commissioner for Human Rights, telling her that she was approved to enter, but Dany wasn’t. Casilla crossed. The next day, Dany paid $1,000 to cross the Rio Grande illegally.

“If she didn’t pay, they were going to kill her,” Casilla said of smugglers affiliated with local cartels.

Dany called Casilla that night from the U.S. riverbank to say she had made it safely with 20 others and been stopped by Border Patrol agents, Casilla said by phone Friday from the Texas border city of McAllen. Dany told her the agents planned to expel all but six of them to Mexico.

“The thing I’m worried about is that they will return her to Mexico,” Casilla said.

She still had not heard from Dany late Friday.

“Why are we in limbo?” asked Denis, another asylum seeker in Matamoros who requested to be identified only by his first name after being threatened by gangs in Honduras.

Two years ago, the cellphone accessory salesman fled north with his wife and three children, was refused asylum in January 2020 and sent his two eldest — Daniela, 10, and Naomi, 6 — across the border bridge. They were admitted to the U.S. and sent to stay with relatives in Roanoke, Va.

Denis, 29, lives at a shelter with his wife Yury, 35, and 2 year-old son, Mykal, who he worries isn’t speaking yet. The couple express frustration that some migrants who cross the Rio Grande illegally are released and allowed to stay in the U.S. while they were sent back to Mexico. He wants U.S. immigration judges to reconsider Remain in Mexico asylum claims rejected under Trump.

“We’re desperate,” said Yury as she sat outside the shelter recently wearing a necklace representing her two daughters in the U.S. “It’s a trauma living my life without my children.”

Another Honduran migrant staying at the shelter, Pamela Quiroz, said she is considering crossing the Rio Grande illegally to reunite with her 6-year-old daughter, Emily.

Quiroz, 25, said she fled north with her daughter after being threatened by a neighbor who was selling drugs. Under Remain in Mexico, Quiroz was required to report to a U.S. immigration court in Laredo across the border from Nuevo Laredo, a notoriously dangerous city where the two were almost kidnapped. After they were refused asylum in November, Quiroz sent her daughter across a border bridge alone where she turned herself in to U.S. customs and was eventually released to live first with Quiroz’s aunt in Charlotte, N.C., then with her mother in Indianapolis.

“It was the hardest decision of my life. She had never been separated from me,” Quiroz said as she sat outside a Matamoros shelter recently, crying. “She kept looking at me and saying, ‘No, Mommy!’ But I knew it was better for her. I felt it in my heart.”

Quiroz, who worked in a truck factory, hired an attorney who advised her to wait in Mexico as an appeal to reopen her asylum claim proceeds. Her daughter worries during their phones calls, she said, about being deported to Mexico or Honduras. Quiroz has struggled to find the girl an attorney. To her, it doesn’t feel like Remain in Mexico ever ended: “There’s no way out.”

“I may have to make another hard decision: To cross the river,” she said. “Between my mother and my aunt, they will find a way to bring me [to the U.S.] I don’t want my daughter to live her life alone.”

Ochoa’s teenage son Jeffrey wants to cross the river, too, and join his younger sister in Los Angeles.

“He always tells me every day, ‘Mommy, cross me. Cross me’,” Ochoa said during an interview at the park in Matamoros recently. “I tell him, ‘Have faith we can enter together’.”

Ochoa worried that her son will sneak away to cross the border. She said that a migrant mother she met at the tent camp last year realized her 12-year-old son had crossed the border bridge alone to claim asylum as an unaccompanied minor only when she got a phone call from her sister in New York City saying he was in Border Patrol custody.

But this week, Ochoa said her feelings changed after a local taxi driver threatened to turn her over to the cartels in Matamoros.

She was still scared Jeffrey would cross the border alone, she said, but, “I am more scared that he will stay with me here.”