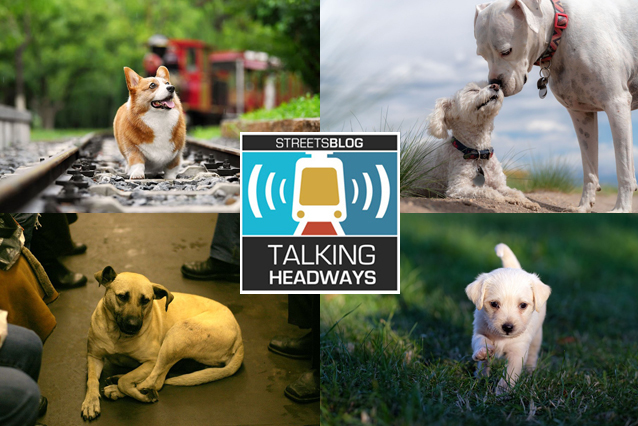 This week we’re joined by Dr. Jennifer Kent, senior research fellow in urbanism at the Sydney School of Architecture. Kent talks with us about why we travel, the effect of family on our travel behavior, and the idea of “messy trips.” But, mostly, we talk about how dogs effect people’s trip choices, whether they will get a car just for the dog or be willing to get rid of a car because the transit system will let them take their dogs where they want to go.

Jeff Wood: Well, so you focus a lot on how families travel in your research, but how did you initially come to that topic?

Dr. Jennifer Kent: Well, I’m really interested in exploring the concept of “derived demand” for travel, but in a really deep and sociological way. So we all know that transport is a metaphor, right? I’m not the first person to have said that, even from the etymology of the word, transport and metaphor mean the same thing: “to carry across.” So when we’re traveling somewhere, we’re not traveling somewhere, we’re practicing the thing that we’re trying to obtain by doing that travel. So I always use the example of traveling to a children’s birthday party. In Sydney, and we have this huge problem with weekend traffic at the moment.

A lot of that is to do with the transport of families, the transport practices of families. I say to transport researchers, when a dad is driving his daughter across town to go to a child’s birthday party, he’s not driving his daughter, he’s being a good parent. He’s socializing his daughter. He’s getting ideas with her next birthday party, he’s meeting with all the parents, he’s networking. These are all of the things that he’s accomplishing through that trip. It’s got nothing to do with, for him, the drive itself. So I’m super interested in all of those tiny details of what actually motivates our transport trips and conceptualizing the demand for transport as a demand for those things rather than demand for transport in itself.

So that brought me to travel with families because travel with families is a highly emotive process for a lot of people, all sorts of journeys associated with care seem to be. In that context, we very readily start to make decisions that are perhaps less in the interest of sustainability or of the wider community, or even our personal health. We prioritize the need to perform familial duties, perform the duty of care. That changes the way that we make travel decisions. So that’s what led me to families.

Jeff Wood: That’s so interesting. You know, we are going to talk about travel and dogs in a second, but part of the response to an earlier piece that you wrote, the responses were a very emotional people’s you no objections or pros for having pets on transport, but I feel like, you know, you talk about that emotional connection too. I feel like there’s also a very emotional connection when you try to talk to people about how their travel effects the greater society, and they get emotional about that, too, and you mentioned that briefly and even said the word “emotive,” I’m wondering how those things are connected — the emotions of it all versus that just kind of disconnected need to serve a greater good.

In some sections of society, there’s still people who will identify very strongly with being a car driver or a truck driver or a driver of a certain car. But, generally in Australia, perhaps a little bit less than in the U.S. — the U.S. is so polarized in so many ways. … In Australia, we don’t find people wrapped up in the identity of their car so much anymore. You know, I think that we’re sort of passed that as the generations have gone through, but we are definitely still attached to a certain type of person and making a certain type of lifestyle work that may be car dependent.

So it’s just another leap from what are the traditional transport research has looked at in terms of emotions and psychosocial connections between transport and the way we travel.

Jeff Wood: That’s so interesting. I feel like sometimes here in the U.S. there is a conflation between that need to travel and how you travel and the connection to the open road or automobiles generally is pretty strong. I mean, even growing up in Houston on the outskirts of Houston, I had access to a car when I was 16. That’s how I got around, even though there were a good bike trails. Where I was biking was something that we could do when you’re younger. When you’re older in the neighborhood that I was in, if you wanted to get outside of that neighborhood, you had to use the car. It meant your ultimate freedom, even though maybe it shouldn’t have.

Dr. Jennifer Kent: Yeah. I mean the freedom and autonomy, the privacy is also an important thing for people in terms of the psychosocial or emotional things that they experienced with the car. Some of my original work looked at those in the conceptualization of the ontological security, the way that we see ourselves in the world. I was able to demonstrate through interviews with people that these three concepts — privacy, autonomy, and flexibility — were just so integral to people’s way of operating in the world, to their ways of working, and to the ways of socializing.

In the city that they were living in, which is Sydney, a hugely car-dependent city, the only way that they could obtain those things was through private car use. So I just think, in transport, we gloss over and underestimate the depth of those connections and how deeply rooted they are in our sense of being not necessarily because we’re all car addicts or nerds or love cars or anything like that. It’s because we love the lifestyle that we have — the lifestyle that we have works for us. To make that work, we need the car.