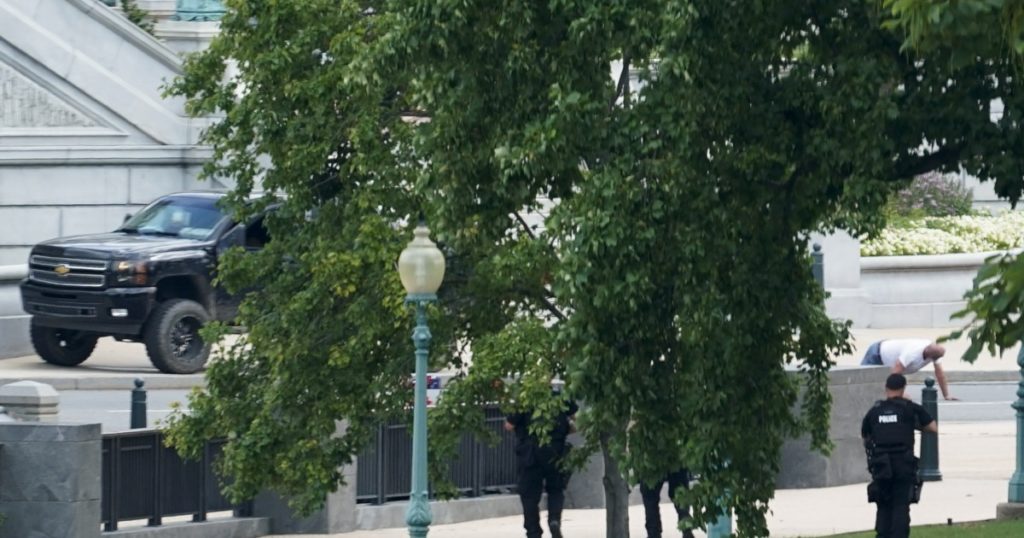 A man who claimed he had a bomb in a pickup truck near the U.S. Capitol, prompting evacuations and an hourslong standoff with police, told a federal judge Friday he has not taken his “mind medication” and was ordered to undergo a mental competency hearing.

Floyd Ray Roseberry appeared before a federal magistrate judge in Washington and was charged with threatening to use a weapon of mass destruction and attempting to use an explosive device. If convicted, he could face a sentence of up to life in prison.

Roseberry, 49, of Grover, North Carolina, drove a black pickup truck onto the sidewalk outside the Library of Congress around 9:15 a.m. Thursday and began shouting to people in the street that he had a bomb. He later made the same bomb threats to police officers and professed a litany of anti-government grievances as part of a bizarre episode that he live-streamed for a Facebook audience.

A law enforcement official in North Carolina had recognized Roseberry and contacted the FBI to tell agents that someone had reported that Roseberry had recently “expressed anti-government views and an intent to travel to Virginia or Washington, D.C., to conduct acts of violence,” according to court papers. The person said Roseberry also told them he ordered a trench coat “to protect him from Taser and pepper ball guns and he would just tip his cowboy hat at the police.”

During the standoff, Roseberry was communicating with police by using a small dry-erase board that he was holding against the driver’s side window of the truck. “Please don’t shoot the windows the vibe will explode the bomb,” one read, according to court papers.

Roseberry surrendered after about five hours. Police later said they did not find a bomb but did collect possible bomb-making materials.

Investigators collected the device Roseberry had been holding — a large rusty can with what he had claimed was a detonator on top of it. The can had about an inch or two of an unidentified powder in the bottom of it and a “fabricated trigger was attached to the top,” court papers said. The can was sent to an FBI laboratory to be examined.

He said he had not received medication for his blood pressure and his “mind medicine.” Roseberry said he had “been denied it for the last week I’ve been here” but later said it had been two days.

He was taken into police custody about 24 hours before he appeared in court.

Roseberry is due back in court Wednesday.