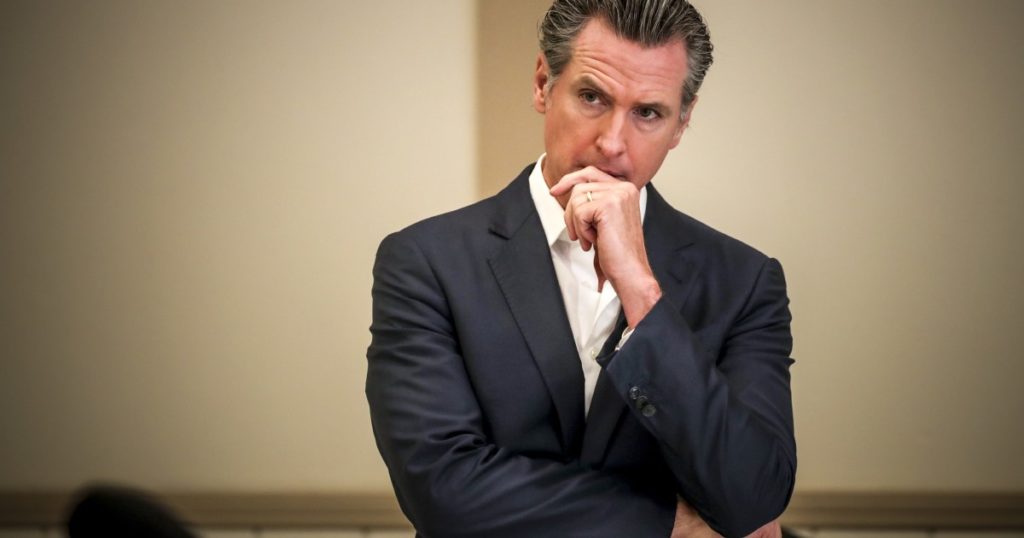 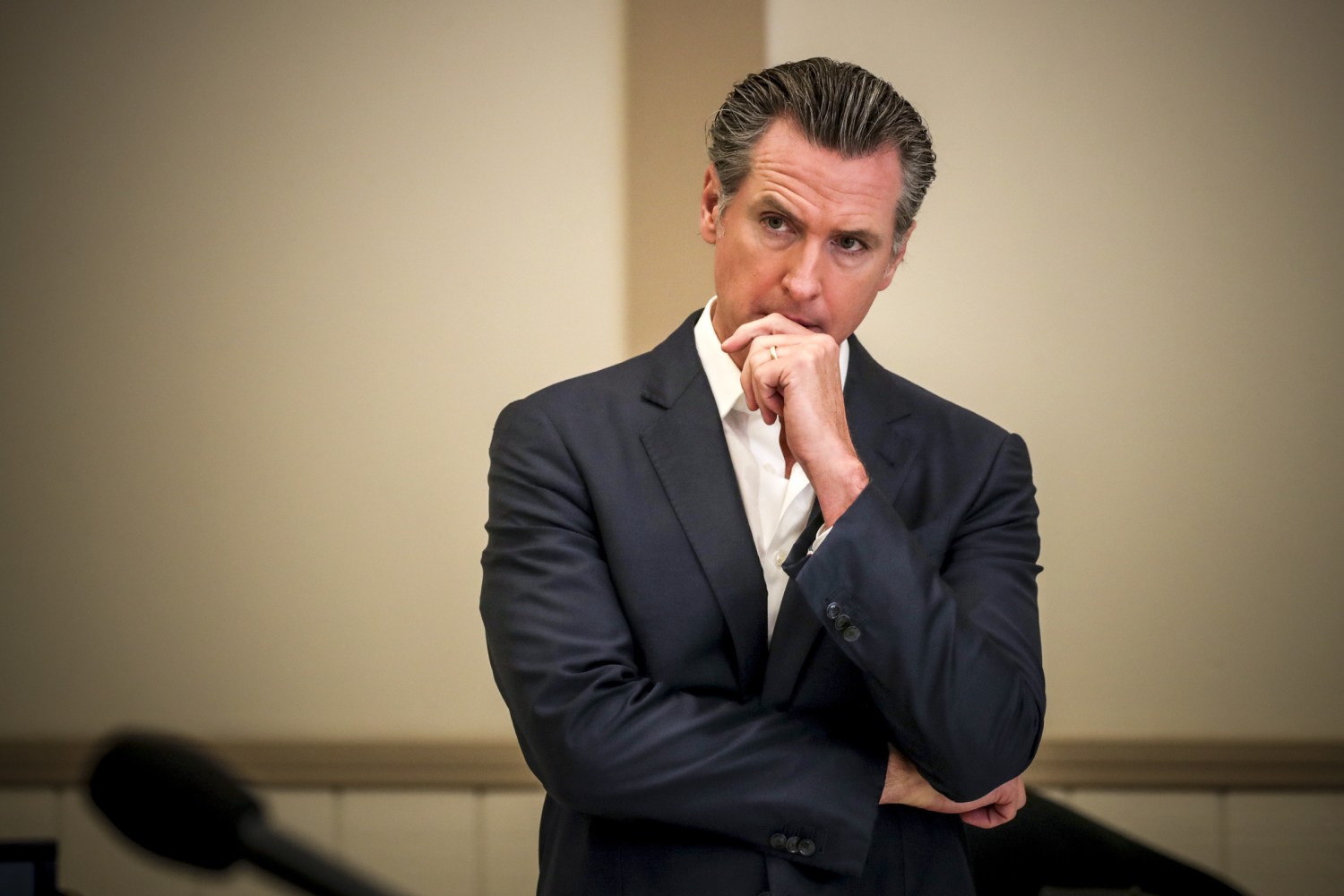 Californians who say they expect to vote in the September recall election are almost evenly divided over whether to remove Gov. Gavin Newsom from office, evidence of how pivotal voter turnout will be in deciding the governor’s political fate, according to a new UC Berkeley Institute of Governmental Studies poll co-sponsored by the Los Angeles Times.

The findings dispel the notion that California’s solid Democratic voter majority will provide an impenetrable shield for Newsom, and reveal a vulnerability created by a recall effort that has energized Republicans and been met with indifference by many Democrats and independent voters.

The poll found that 47% of likely California voters supported recalling the Democratic governor, compared with 50% who opposed removing Newsom from office — a difference just shy of the survey’s margin of error.

Conservative talk radio host Larry Elder, who last week won a court battle to appear on the Sept. 14 recall ballot, leads in the race to replace Newsom among the dozens of candidates in the running, while support for reality television star Caitlyn Jenner remains low, the survey found. Forty percent of likely voters remain undecided on a replacement candidate, providing ample opportunity for other gubernatorial hopefuls to rise in the ranks before the Sept. 14 special election.

Even though Democratic voters far outnumber Republicans in California, the GOP’s enthusiasm over the recall promises to inflate the potency of the anti-Newsom vote in September, said Mark DiCamillo, director of the poll. Nearly 90% of Republicans expressed a high level of interest in the recall election while just 58% of Democrats and 53% of independent voters were as interested, the poll found.

“Democrats, at least in the middle of July, almost unanimously believed that Newsom will defeat the recall. I think that may be contributing to some complacency among those voters. Republicans, on the other hand, are confident that they can turn out the governor,” DiCamillo said. “I think the Newsom campaign really has to light a fire among the Democrats and say, ‘Look, the outcome is in jeopardy unless you get out there and vote.’”

Though Republicans account for only about a quarter of all registered voters in California, the poll found that they account for 33% of those most likely to cast ballots in the recall election. Democrats make up 46% of the state’s 22 million voters and “no party preference” voters 24%, but their share of the likely recall voters drops to 42% and 18% respectively, DiCamillo said.

“Gavin Newsom is in serious trouble at this time because his base of voters is not motivated to come out and support him,” said Dave Gilliard, one of the political strategists leading the effort to oust Newsom.

Gilliard said Newsom doesn’t have much time to correct that, or voter discontent over the homeless crisis and crime in California, since elections officials will begin mailing ballots to all registered voters starting Aug. 16.

A law signed by Newsom last year requires ballots to be mailed to all voters for any election held in 2021, though voters can choose to relinquish those ballots and participate in person.

Gilliard said he noticed that Newsom’s anti-recall campaign has shifted its political advertising strategy and is calling the recall a “scheme by Trump Republicans to take over California,” a strong indication about the governor’s level of concern.

Newsom has long attempted to tie the recall effort to former President Trump, who was roundly defeated in California by President Biden in the 2020 presidential election. Trump supporters, along with anti-vaccination activists and far-right groups, were early supporters of the recall.

“Californians see this Republican recall for what it is — a blatant attempt by Trump supporters to grab power and impose their agenda on California,” Nathan Click, spokesman for Newsom’s anti-recall campaign, said in a statement. “But Democrats can’t get complacent. The only way to prevent the Republican takeover of California is by voting NO by Sept. 14. If Californians vote, we win.”

The governor‘s anti-recall campaign has ample money to rally Democrats behind him. Newsom and anti-recall committees have raised $32.5 million to defeat the effort, compared with $16.8 million raised by pro-recall efforts and Republican candidates trying to replace him.

DiCamillo said voter interest among Newsom backers may also be tempered because the recall is an unscheduled election, devoid of other races or controversial statewide ballot measures that could gin up turnout. The recall also lacks a prominent Democrat hoping to replace Newsom or the celebrity of a GOP candidate such as Hollywood action star and former Gov. Arnold Schwarzenegger, who ousted then-Gov. Gray Davis in the 2003 recall election, which became a worldwide spectacle.

The poll results among likely voters were far different than those among the overall electorate, which have remained relatively unchanged when compared to the institute’s surveys in April and January. The new poll found that 36% of registered voters in the state support removing Newsom from office and 51% were opposed.

Political scientist Mindy Romero, director of USC’s Center for Inclusive Democracy, said voter turnout will hinge on a few crucial factors: Do Californians believe the recall election is important to their lives, how consequential will the outcome be to them, and do they think their vote matters?

Romero believes Newsom has the political support and dexterity to defeat the recall. But he needs more than that, she said.

“He doesn’t just want to win, he doesn’t want it to be close,” Romero said. “If it’s close, that in itself essentially looks like a failure.”

Romero also cautioned that potential pitfalls for Newsom remain, including how he responds to the fast-spreading delta variant of COVID-19, which could potentially force new restrictions, and a wildfire season that has already proved to be highly volatile. Mailing all voters a ballot in last year’s presidential election, she said, may have contributed to record turnout.

Californians voting in the Sept. 14 election will receive a ballot with two questions: Should Newsom be recalled from office and, if he is ousted, which replacement candidate should take his place.

If Newsom is recalled, the candidate on the ballot who receives the most votes wins — no matter how many votes he or she receives. The crowded field of candidates is expected to splinter the electorate, which means a Republican who reels in just a small fraction of the vote could become California’s 41st governor. No Republican has won a statewide election in the state since 2006.

In the 2003 recall, more than 55% of voters agreed to remove Davis while less than 49% chose Schwarzenegger to serve out the remainder of Davis’ term.

When asked to pick their first choice among the candidates hoping to take the helm as California’s next governor, 18% of likely voters preferred Elder. Among other Republicans, former San Diego Mayor Kevin Faulconer and Rancho Santa Fe businessman John Cox, who was trounced by Newsom in the 2018 gubernatorial election, both were backed by 10% of likely voters. Assemblyman Kevin Kiley of Rocklin received support from 5% of those surveyed.

Jenner, a retired gold-medal Olympian and the most famous candidate in the race, was backed by just 3% of likely voters. Jenner is currently in Australia filming a reality television show.

DiCamillo said the vast number of undecided voters, 40%, probably still need more information about the candidates before making a decision in the weeks ahead about whom they might support.

Nearly a quarter of voters, mostly Democrats, said they don’t plan to vote for any of the candidates in the replacement election. If that holds up, Republicans will have much greater influence in deciding who will become the next governor if Newsom is recalled.

The latest effort to recall Newsom is one of six launched since he took office in 2019 and the only one to gather just under the 1.5 million petition signatures from registered voters required to qualify for the ballot.

His support began to decline, as it has for other governors across the country, as people began to chafe over COVID-related lockdowns that put millions out of work, shut down businesses and forced schoolchildren into distance learning programs. Most pandemic-related restrictions in the state have since been lifted.

Last September, 64% of registered voters in California approved of the job Newsom was doing as governor, compared with 36% who disapproved. This month, half of those registered voters gave Newsom good marks, while 42% did not.