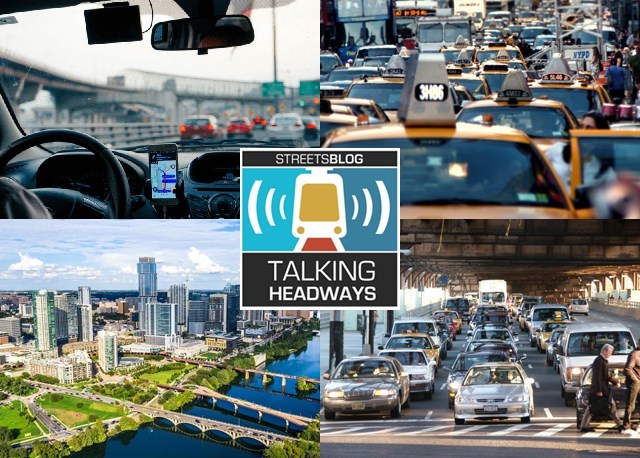 This week, we’re joined by UC Berkeley PhD candidate Matthew Tarduno, who talks to us about his paper comparing congestion and economic impacts of ride hailing companies Uber and Lyft before and after the cessation of service in Austin, Texas. We talk about potentially beneficial congestion policies and how the paper might apply to some cities and not others.

For those of you who prefer to use your eyes rather than your ears, there’s a partial transcript below the audio player (a full transcript is here):

Jeff Wood: So you wrote a paper entitled “The Congestion Costs of Lyft and Uber” in the Journal of Urban Economics. I’m curious what the impetus was. I mean, you kind of explained a little bit, but what the impetus was for thinking specifically as it pertains to ride hailing.

Matt Tarduno: Yeah. So the kind of intellectual history of this project would be that I was interested just in the causal question of “Do ride sharing companies impact congestion?” You know, the answer could go either way: they are, after all, called ride-sharing companies, so you could imagine that either the ride-sharing effect could mean people are actually using Uber and Lyft to carpool, and congestion could go down as these companies expand. Alternatively, there were a lot of people who use Uber and Lyft who don’t have vehicles or who might use them differently than they would their personal car. And so you can imagine that Uber and Lyft could add cars to the road and make congestion worse.

So when I started thinking about this problem, there were a couple of studies that had looked into this, some using Uber data, some using just city specific data. But the one thing that I noticed is that all of these studies kind of looked at the change in Uber entering cities. And there’s kind of an interesting causal question there; you can say, “OK, in between 2010 and 2016, traffic got worse in a city and also the use of Uber and Lyft increased.” But correlation does not mean causation. So it’s not clear that the increased congestion was caused Uber and Lyft because there were a lot of other changes that are happening in between 2010 and 2016.

Such as: we’re coming out of a recession, there’s gentrification, there’s the expansion of companies like Amazon. So what I wanted to do is kind of find an example where you had a really abrupt change in Uber service, where you had, say, disruption disrupting the disruptor. That kind of went from city to city and looked at cases where Uber and Lyft had exited by choice or were forced to exit. And then I checked which cities had reasonable traffic data that I could use to answer that question. And Austin was kind of the intersection of that Venn diagram. They have great traffic data, and then also there’s this great natural experiment where Uber and Lyft left for a year. And so that’s why Austin,

Jeff Wood: What’s the background on why Uber and Lyft left Austin?

Matt Tarduno: So Uber and Lyft left Austin in May, 2016, following a vote to overturn a local ordinance. So that’s all, that’s one big sentence. I’ll kind of break that down: In 2015, Austin passed a local ordinance regulating rideshare that said among other things that rideshare needed to share data with the city and they need to do background checks on drivers. Uber and Lyft were not fans of this ordinance. They made kind of a big stir about the background checks, but also they were probably very unhappy about sharing their data.

So what they did, and this is becoming more common, is they backed a ballot proposal to overturn this regulation against them. We saw this again recently in California, but unlike the recent California story, the proposition that Uber and Lyft backed failed. And then, Uber and Lyft kind of made good on their threat and they left two days after it failed. So May 9, 2016, the companies stopped operating.

Jeff Wood: Yeah, it was interesting. All the stuff that happened at that time. I actually went to school in Austin. And so I pay a little bit of closer attention to what goes on there sometimes. And you know, it was interesting to see kind of all the commentary from all of my Facebook friends and everything. And people were not happy with Uber and Lyft at the time. And especially drivers, people that were driving for Uber and Lyft, they were like, “You’re leaving us, you’re abandoning us.” There was an interesting racial element about how Houston, for example, had the background checks, and they didn’t want it in Austin, but your point about data is really interesting. So there was just so much going on and, and just kind of left. And I think people felt like they were left in the lurch to a certain extent because they’d come to depend on the ride-hailing to get to, you know, late night, Sixth Street and things like that.

Matt Tarduno: Did you ever ride with Ride Austin?

Jeff Wood: It was expensive, but it was great. And I get, you know, that’s the thing is like Uber and Lyft are popular, I think, in part, because they are lowering prices below what actually the cost of the rides are, and we’ll get to the economic part in a bit. But, you know, I think that that’s something that probably surprised a bunch of people cause Ride Austin had to pay for what they’re doing. They didn’t have a lot of money behind them. So, you know, if you want to ride from the Arboretum all the way down to the airport, it was going to cost you $70 to $80, which is something that you’d probably pay for a taxi to get to an airport in any other city. But, you know, that’s the cost, right? So, yeah, I didn’t use it necessarily to get around the city, but I did use it to get to the airport.

Matt Tarduno: Yeah. And that’s kind of tied into one of the things that I do in the paper (spoiler alert). I’ll share that I found small impacts of these companies on traffic speeds, that they cause mild congestion. And I compare those costs to kind of what are the benefits of these companies. And one way to do that is to look at consumer surplus. So kind of like how much are people getting from these companies compared to what they would be willing to pay. And I think this kind of illustrates that Uber and Lyft are significant urban amenities. And so when we think about kind of the implications that they have for, say, congestion or public safety, we also have to weigh that against these considerable benefits that Uber and Lyft really are like head and shoulders, efficiency-wise, above the competition.

Jeff Wood: Also a question about what efficiency actually means, I’m sure. But I think what a lot of people kind of gravitated to was the finding that there were congestion impacts. After Uber and Lyft left, Austin congestion was reduced by anywhere between 1 and 5%.

Matt Tarduno: So the daytime speed increased 2.3% on average. And these effects might be heterogeneous by location or by weekend versus weekday, but kind of any way you slice it, you’re not going to have an effect that’s say less than 1% or greater than about 5%.

Jeff Wood: And also one other thing that was interesting you found was the economic impacts, you know, with Uber and Lyft leave, there’s a benefit from a congestion reduction standpoint, but then there’s also a loss of a service that people use.

Matt Tarduno: So to clear about exactly what I did: I said, “OK, like these companies seem to have slowed traffic. There’s kind of a broad literature on what people are willing to pay for reductions in travel time.” And so I kind of take a couple of different sources of data, some just from Austin, some from kind of national surveys, and say, “Let’s price this; let’s say take the congestion impacts and assign a dollar value to them.” And so what I find is that the slowdowns caused by these companies cost Austinites roughly $30 to $50 million a year. And then I like, “OK, that’s a number that we have up on the wall.”

What should we make of this? And kind of, how would we compare it to the benefits of these companies? And one thing that we can do is look at what do consumers get out of it. So for getting the supply side for a second for getting kind of the profits to Uber, or even the benefits to gig workers, we can look at what consumers get. And there’s a great paper by authors at the University of Chicago using Uber data. And what they do is they kind of calculate the consumer surplus in this like very cool and data intensive method. And I kind of take their figures and do a back of the envelope calculations for Austin. And when I run those numbers, I find that consumer surplus from ride sharing is about the same, so $40 to $70 million a year.

And so what that means is that if you were to just like, again, go to Austin and say, no ride sharing, at least comparing congestion and consumer surplus, it’s roughly a transfer. And so when you’re thinking about policy, is it like, well, these companies are bad for congestion, so we should outright ban them. That’s kind of one end of the extremity spectrum of what you could do in terms of policy. It seems like that’s probably a policy where the costs outweigh the benefits.