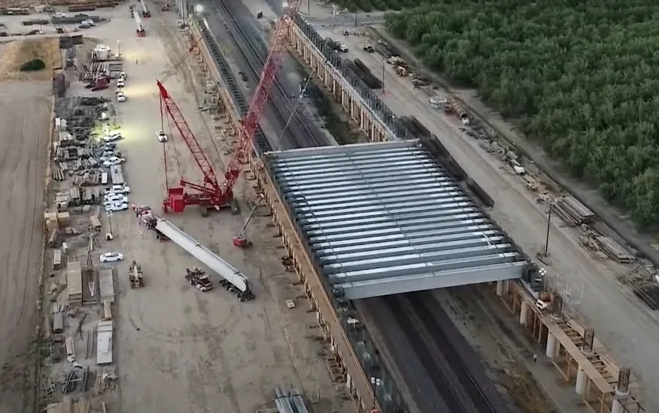 The Assembly and the Senate want to deny a request from the California High-Speed Rail Authority – and from Governor Newsom – to release voter-approved Prop 1A funds. In the budget proposal they released this week – a counter proposal to Newsom’s May Revise – they recommend continuing to invest much more in roads and highways than towards more sustainable transportation like transit and active transportation.

At least their budget doesn’t just reject the last two, like it does high-speed rail. But it does not include the request by the California Transportation Commission and advocates to add $2 billion to the Active Transportation Program, instead matching the Governor’s proposal to add $500 million this year – an amount that pales next to the $2 billion total for streets, roads, and highways.

As for the high-speed rail program, Governor Newsom had proposed releasing $4.2 billion in Prop 1A bond funding for a variety of purposes, including finishing the Merced-to-Bakersfield segment and finishing planning and environmental review for the remaining SF-to-LA route.

But the legislative budget committees recommended these allocations be deferred or rejected. Their reasoning is that the proposed allocations “should be considered within the overall context of the Authority’s Business Plan, the Legislature’s plan and future federal funding. Deferring action on this item will allow more time for the federal infrastructure plan to come together and the possibility to leverage additional federal funds for California” (emphasis added).

The Authority’s business plan was already considered at hearings earlier this spring. That’s where the CAHSRA requested the funding Newsom had included in his budget proposal.

Future federal funding will be hanging in the balance for a long time, as that ongoing negotiation is still stuck on the definition of “infrastructure.” Besides, investing state money in the project, and advancing pieces of it like the connection to L.A., would put California in a much better position to leverage federal funding than sitting on it and waiting for help – so that argument doesn’t pass muster.

Opponents in the legislature have been trying from the beginning to pull the plug on the project, even after construction had been ongoing for years. Even now, every session lawmakers introduce bills to reallocate the money high-speed rail is getting from the Greenhouse Gas Reduction Fund to something else. For example, in 2021 there were bills to put that money towards K-12 education (A.B. 5, from Fong), the Salton Sea (S.B. 527, from Melendez), and forest fire prevention programs (A.B. 648, also Fong–at least there’s a climate connection on that one.)

But even legislators who claim to understand the value and importance of high-speed rail, including Assembly Speaker Anthony Rendon and Transportation Chair Laura Friedman, have been loudly skeptical of the program. Last year, Assemblymember Luz Rivas authored a bill that would have taken money away from high-speed rail to use for undefined LA Metrolink improvements. The bill went nowhere, but those moves highlight something alarming about this megaproject: there seem to be few strong champions for high-speed rail in the legislature.

Ongoing media coverage that paints the high-speed rail program as a “failed project” (despite the progress it has already made) has not helped public perception, and many Californians – outside of the Central Valley – are under the misconception that nothing is happening or the project is dead.

But instead of standing up and arguing the case for committing to it, members of both the Senate and the Assembly seem to be backing off.

Either that, or they’re hoping for a bargaining chip in budget negotiations with Governor Newsom, who wants to follow through on the promise made when voters approved Prop 1A.

Now that the Senate, Assembly, and the Governor have all made their budget proposals, they have a little over a week to come to an agreement on them. Those negotiations are happening away from public scrutiny – so it’s anybody’s guess what will happen with high-speed rail.

And the stakes are high. Waiting to release voter-approved funds, as proposed by the legislature, could threaten major, expensive delays in contracting, construction, and hiring, further undermining progress on the program well into the future.