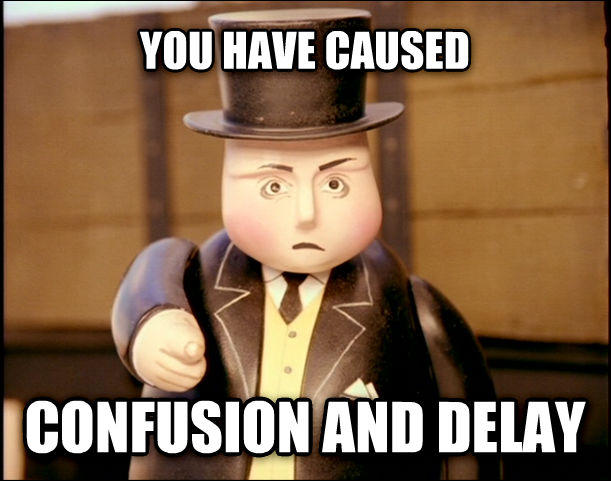 Those of us that either grew up or had our children grow up with Thomas the Tank Engine, are familiar with the stern rail master who chides the personified trains when their goofiness caused some catastrophe on the rail lines.

“You have caused CONFUSION AND DELAY!” Sir Topham Hatt would exclaim.

The child-like train would shed a tear and slink off, admonished and ashamed.

When I saw the agenda for this week’s California High Speed Rail Authority Board Meeting, I pictured Hatt chiding the legislature for failing in their ministerial duties to release Prop 1a Funds approved by voters in 2008. The authority was planning to use the funds to cover construction and operations starting in November 1, but the legislature did not include the funds in the budget it sent to Governor Newsom even though Newsom had included the funds in the draft he sent the legislature.

And now we can start to see the real-world results of the “confusion and delay” a few key legislators have caused.

In the budget update to its board of directors, agency staff announced it is preparing for a future where funding is held back, endangering tens of thousands of jobs and causing more delays and cost overruns to the project.

So while scientifically illiterate legislators prattle on about battery powered trains that might someday avoid the need for electrified overhead wire, there are real world impacts.

Contracts will be cancelled or not renewed.

Workers, as those seen above, will be laid off.

The country’s signature transportation project to combat climate change will be indefinitely delayed, just as funds are becoming available in Washington to complete the project–exactly the situation these same legislators once claimed they were waiting to see materialize.

The next meeting of the Board of Directors will be held on September 23. One can’t help but wonder if the legislature would be so cavalier with tens of thousands of jobs if the Board’s new budget would be decided ten days earlier…the day before the Governor’s recall election.