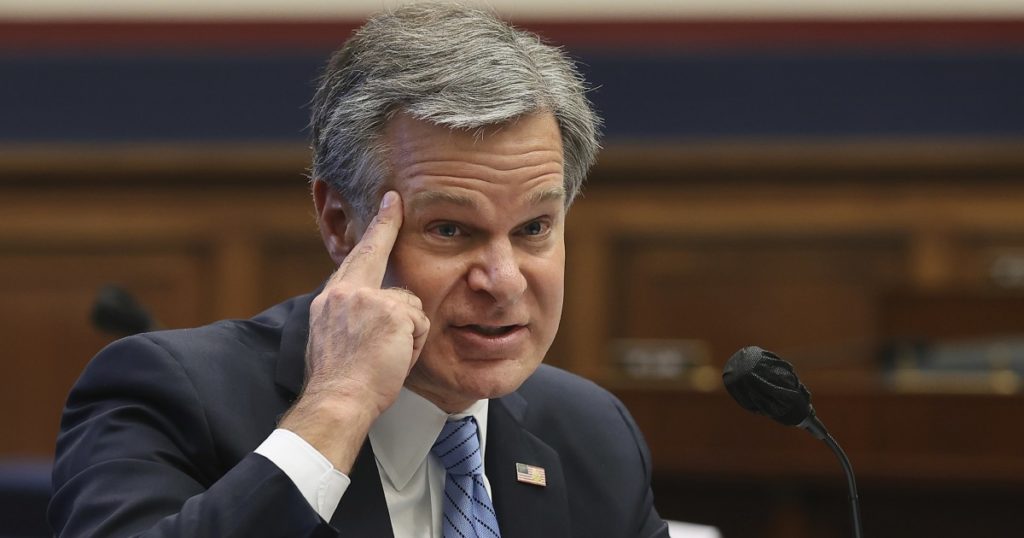 Lawmakers are expected to grill FBI Director Christopher A. Wray at a congressional hearing Tuesday that will delve into his agency’s handling of threats posed by domestic terrorists and right-wing extremists in advance of the Jan. 6 siege of the U.S. Capitol.

Wray’s testimony before the Senate Judiciary Committee comes as legislators in both parties are trying to figure out why the nation’s premier law enforcement agency was caught by surprise when supporters of President Trump overwhelmed police and stormed the Capitol complex.

Five people, including a police officer, died in an hours-long assault that left scores of officers injured, inflicted millions of dollars in damage and threatened the lives of legislators, staffers, reporters and members of the public.

“What did he know, and when did he know it, and who did he tell?” Sen. Richard J. Durbin (D-Ill.), chairman of the committee, said Monday, foreshadowing his line of questioning for Wray. “He is the man of the hour.”

FBI officials did not respond to emails or phone messages seeking comment about Wray’s appearance, and it is not clear how he will respond to criticism from three former Capitol security officials who testified last week that the FBI and other federal agencies provided them with no concrete warnings of what was to come.

“None of the intelligence we received predicated what actually occurred,” former Capitol Police Chief Steven Sund testified Feb. 23 before a joint hearing of the Senate Rules and Homeland Security committees.

“We properly planned for a mass demonstration with possible violence,” Sund said. “What we got was a military-style, coordinated assault on my officers and a violent takeover of the Capitol building.”

Sund conceded that his agency had received an intelligence report Jan. 5 from the FBI warning that extremists were gearing up for “war.”

The former Capitol chief testified that he saw the bulletin, issued by the FBI’s office in Norfolk, Va., only in recent weeks and described it as “strictly raw data. It’s raw intelligence information that has come in, seen on a social media post. Lots of people post things on social media that needs to be, you know, corroborated and confirmed.”

He indicated that if he had seen the report before the Jan. 6 riot, it likely would not have changed his department’s preparations.

“I would certainly think that something as violent as an insurrection at the Capitol would warrant, you know, a phone call or something,” Contee testified.

Though lawmakers have focused attention on the FBI bulletin, there was plenty of other public evidence suggesting that Trump supporters were bent on disrupting the counting of electoral votes. News reports, for example, documented escalating rhetoric on social media sites and forums.

Trump was also active on Twitter and other platforms in promoting a “Stop the Steal” rally that drew thousands of his most diehard supporters to Washington on Jan. 6 — the day Congress was to certify the election results, which is normally a ceremonial exercise.

The rally was the culmination of the former president’s months-long, falsehood-filled campaign to overturn an election he lost to Joe Biden. Trump had been pushing for his vice president, Mike Pence, to unilaterally toss out some states’ votes for Biden, a power Pence did not have. Trump pressured Pence again in his rally speech and told supporters to head to the Capitol. “If you don’t fight like hell,” he said, “you’re not going to have a country anymore.”

Many heeded his call. Hundreds, many decked out in Trump campaign attire and waving Trump flags, stormed past police and into the Capitol. Trump was impeached by the House for inciting the riot, but the 57-43 vote in the Senate, though historically bipartisan, fell short of the two-thirds majority required for conviction.

The Justice Department has launched a sprawling investigation into the siege and has arrested more than 280 people on charges tied to riot. Congress is considering establishing a 9/11-style commission to examine the siege, and several committees have held hearings examining domestic terrorism and its financing. Last week, lawmakers heard directly from Capitol security officials, and in coming days they will hear from military and Homeland Security officials.

Wray has testified in the past that combating domestic terrorism is a top FBI priority, and the threat posed by extremists has grown. The FBI said it had arrested 180 people on charges tied to domestic terrorism in the fiscal year to Sept. 30, up from 107 the previous year. The Department of Homeland Security reported last year that violent white supremacy was the “most persistent and lethal threat in the homeland.”

The FBI director has emphasized that his agents face challenges in investigating right-wing and other domestic extremists because their speech is protected by the 1st Amendment.

“We’re focused on violence,” Wray said in September, “not the ideology.”

Senate Democrats have expressed skepticism over how aggressively the FBI has battled right-wing extremists. In a letter sent to Wray last week seeking information about domestic terror investigations, Democrats on the Senate Judiciary Committee criticized the agency for appearing to have taken steps during the Trump administration “to minimize the threat of white supremacist and far-right violence.”

Durbin said Monday that lawmakers on the committee haven’t heard from Wray in about 18 months and have “many questions.” He added that his committee was conducting a deep dive into how federal agencies are confronting domestic terrorism.

“Domestic terrorism, religious- and racial-based hate groups have become a major threat in America,” Durbin said. “I want to know if our intelligence operations have taken this into consideration in establishing their priorities.”