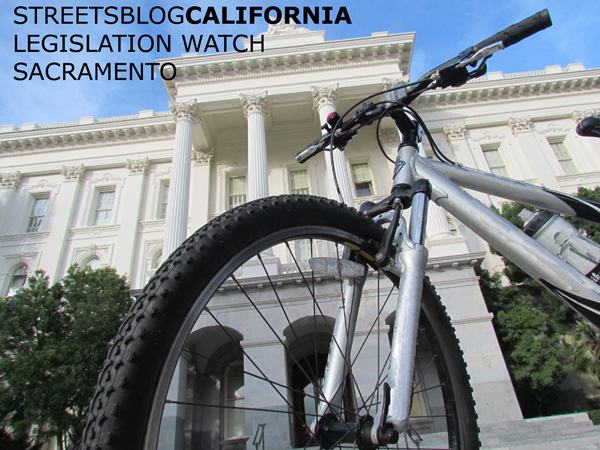 In the next few days, current bills that have already passed their house of origin are being heard by committees in the other house. All must be passed – or held, or die – before the legislature goes on summer break, starting this Friday, July 16. As usual, there’s a flurry of activity in committee to get legislation out as quickly as possible to get full votes on the Assembly and Senate floor.

Three important pieces of legislation were approved by the Senate Transportation Committee on Tuesday. Two of them, A.B. 773 and A.B. 43, are ready for a final Senate vote before moving to the Governor’s desk for a final signature. Another, A.B. 1147, needs a thumbs up from the Senate Appropriations Committee first.

A.B. 773 , introduced by Asm Adrin Nazarian, would allow cities to close streets to vehicles to keep them safe for other users, thus allowing them to make the pandemic-inspired “safe streets” permanent. While many cities are already moving to build on the successes of the Slow Streets program, this legislation clarifies existing state language to reduce the chances that worthy programs could be held up by legal challenges.

Happy to see AB43 starting to move through the senate. It’s the start of my efforts as Trans chair to prioritize road safety and reducing traffic violence. https://t.co/3mu08m638Q

A.B. 43, introduced by Asm. Transportation Committee Chair Laura Friedman. begins the process of changing the way speed limits are set, based on recommendations from the Zero Fatalities Task Force of a few years ago. It would make it easier for local jurisdictions to lower speed limits, something that they are currently prevented from doing by the state’s 85th percentile rules.

A.B. 1147, also introduced by Friedman, would require a number of changes to the ways regions plan their transportation and land use, including requiring them to account for how transportation funds support greenhouse gas reductions. It would also require Caltrans to develop a proposal for building bicycle highways to support long bike commutes. As noted above, the bill needs approval from the Senate Appropriations Committee before moving to the Senate Floor.

A.B. 1401, another bill introduced by Friedman, faces a similar path. 1401 was passed by the full Assembly and the Senate Housing Committee earlier this month, but needs a thumbs up from Senate Appropriations. 1401 would prohibit cities from imposing minimum parking requirements on developments near transit, which have led to overbuilt parking and higher housing costs, among other negative outcomes. The same path through Appropriations exists for A.B. 1238, by Asm. Phil Ting, which would “decriminalize jaywalking.”

Assemblymember Richard Bloom’s A.B. 917 also has one committee stop, the Senate Judiciary Committee, before a possible Senate vote. This would expand a pilot program being used on the Alameda Contra Costa Transit system to allow every transit agency in the state to enforce bus-only lanes and parking violations at bus stops using cameras attached to the buses.

It’s 10:21pm and I’m grateful for all those who called in in support of #AB339: to KEEP remote participation for gov meetings! It just passed its final senate policy committee. It’s proof that democracy works better with modern tools. More people participate, the better

I’m sure there’s plenty of legislation that we missed in this roundup. We’re planning (at least) another one early next week. If there’s something you’d like us to cover, email damien@streetsblog.org.