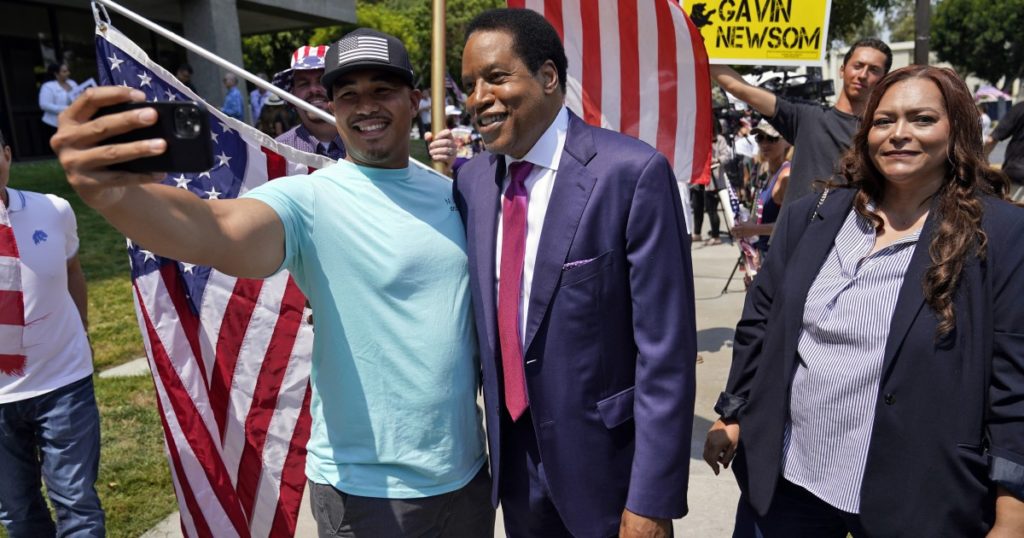 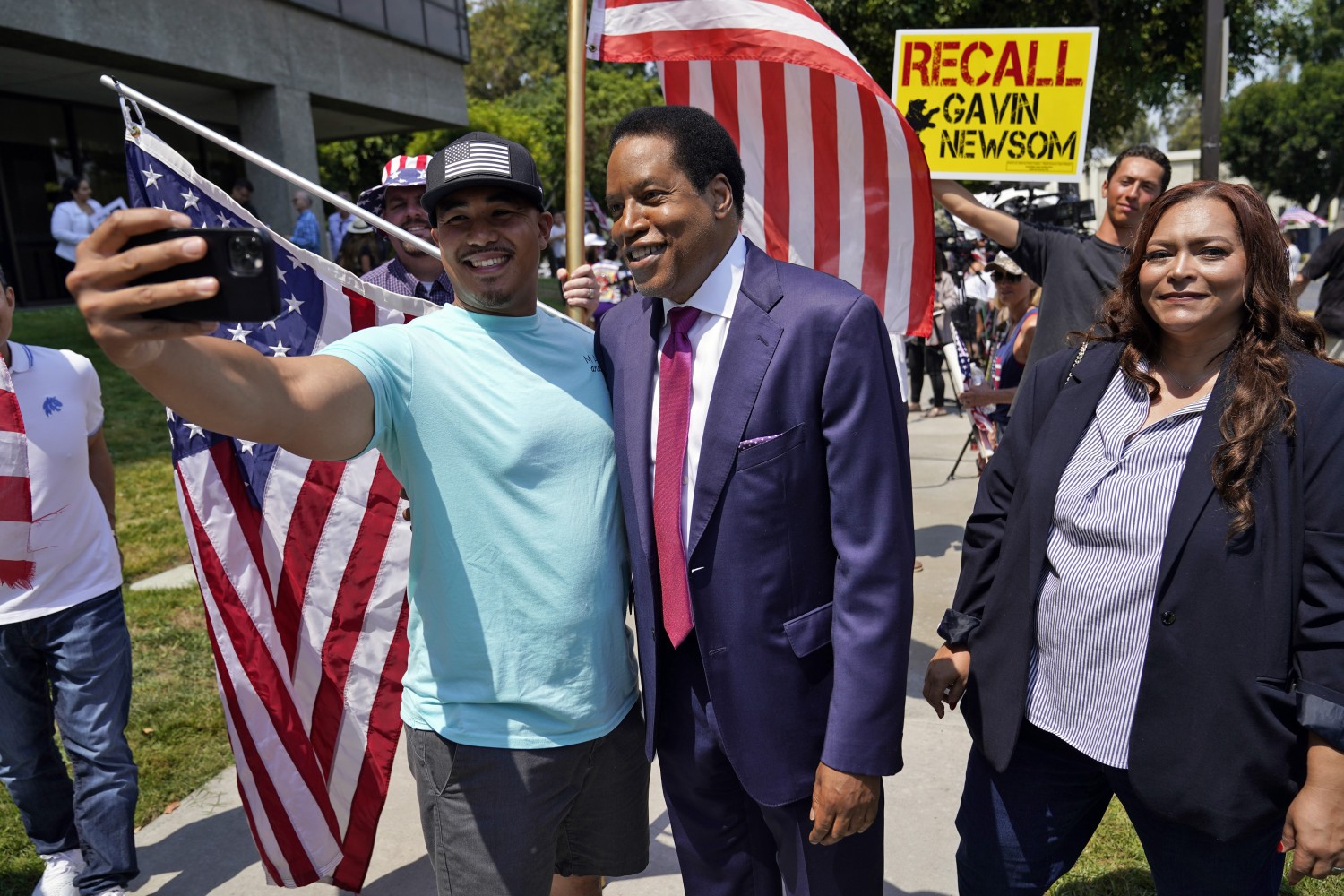 No wonder liberals think Larry Elder is a walking Armageddon, an asteroid hurtling toward Sacramento.

He wants to repeal all COVID-19 mask and vaccine mandates if he becomes the next governor of California. The radio personality thinks the ideal minimum wage is zero dollars. He already calls undocumented immigrants “illegal aliens” and thinks women “exaggerate the problem of sexism.”

If California voters recall current Gov. Gavin Newsom on Sept. 14 and Elder maintains his lead among the 46 candidates running to replace the incumbent, it sure seems like Endsville for the progressive California dream.

Critics decry the views of the self-proclaimed Sage from South Central as apocalyptic … because they are. His administration would be a nightmare of grievance politics and own-the-libs revenge, and he’d treat governance of the world’s seventh-largest economy as a Monopoly board where only money talks and social services are exiled to Baltic Avenue.

With current polls showing the recall of Newsom — a once-unthinkable scenario — now a possibility, many Californians are understandably freaked out about the future. But as the cliché goes, the darkest hour is just before dawn. It’s something glum Newsom supporters should mutter to themselves until it becomes a mantra, because I see this scenario playing out right now.

For this recall is a political Ragnarök, nowadays most associated with a 2017 Marvel Cinematic Universe film of the same name that starred the character Thor, but originally a series of events in Norse mythology that culminated in a grand battle through which a better world emerges from the old one.

That’s exactly what’s going to happen whether Newsom or Elder ends up in Sacramento. Because regardless of the final result, California politics will never be the same again. And this will all be worth it if it means we have come to the Twilight of the Talk Show Gods that have plagued Southern California for a generation.

For a quarter century, they have raged against the demographic and political transformation of the state. They have waged multiple scorched-earth campaigns against liberalism and helped transform American conservatism into the illogical zombie army it is today. These yakkers constructed a hot-air balloon of whininess that makes “social justice warriors” seem as taciturn as Ma Joad.

But man, has their blimp of bloviation gone around and gaslit nearly half of the United States — and it’s now ready to descend on the steps of California’s capitol.

Dennis Prager and Ben Shapiro launched video and podcast empires that easily outperform most of the legacy media. Hugh Hewitt gave intellectual cover to the architects of the Afghanistan and Iraq wars. Joe Rogan and Adam Carolla preached the gospel of bro libertariniasm — librotarianism? — that got younger men to scoff at any lily-livered authority figures. John Kobylt and Ken Chiampou, the longtime afternoon rush-hour hosts for KFI-AM (640), were the gasoline that fueled California’s last recall fire: the political immolation of Gray Davis.

All their decades of fulminations have led to this moment. And they couldn’t have found a more perfect candidate than Elder.

He’s their Savior From South Central, the messiah conservatives feel can deliver California to the Republican Party after a generation in the political wilderness. A person of color who shares their retrograde values and noxious mouths. A Black man who obsesses over the supposed pathologies of Blacks and Latinos and — if fans need any further proof of his democratic divinity — used to end monologues on his show with “You have just heard …The Word.”

He imagines himself Larry the Elder. He ain’t.

I’ve tracked Southern California’s talk-show world for almost 20 years now, and Elder has always been the host who least impressed me. Sage From South Central? More like the Snore. He’s the radio version of a wagging finger. His eternal cant of smug victimhood — the one sane man in a sea of ignorance, rejected by his own community and harassed by the mainstream media — was more believable when Richard Nixon was doing it.

His rhetorical tricks — bury opponents in a rush of book titles, quotes and stats buttressed by respectability politics that make Booker T. Washington sound as radical as Malcolm X — are out of a high school debate team. His evasiveness on simple matters — won’t release his tax returns like other recall candidates, wouldn’t answer questions from my fellow columnist Jean Guerrero during a meeting with the L.A. Times editorial board, wouldn’t even answer a query from the San Diego Union-Tribune about what kind of car he drives — suggests someone who likes to deliver uppercuts, but deep down fears his chin is as brittle as a champagne flute.

No wonder his contemporaries have rushed to help prop up Elder’s Passion play of pomposity.

Hewitt endorsed him; Prager convinced Elder to run. John and Ken and Carolla invited Elder on their shows this summer for softball interviews, while Shapiro — who moved his media empire to Tennessee last year — tweeted “Can’t wait for the [Larry Elder] governorship in CA. Almost enough to make me think about moving back. Almost.”

There’s an enthusiasm for Elder’s candidacy among his fans not just for his views, but because there’s a realization that he’s the last, best shot at a conservative California. See, the days when talk shows helped shape Southern California politics are mostly over. Ratings have dropped from their heights in the mid-2000s; most hosts joined their listeners in either moving from California or openly wishing to. There is no young, local heir to take their place, even in this modern podcast age.

Conservatives know their End Times are here — but Newsom’s camp still doesn’t get this, so stumbles instead of surges toward its enemy.

Even if Elder emerges triumphant and he tries to go through with his threats, the supermajority Democrat state Legislature will block his moves like Dikembe Mutombo squaring off against a second-grade squad, while voters will easily push him out in the 2022 election.

Elder is a false prophet in a state that has churned them out, left and right, like widgets in an assembly line. He believes in his hype and is now acting like the California throne is inevitably his. But democracy isn’t predestined, and tribulations are needed to make us truly treasure it. Let Elder’s reign end before it truly begins, end talk-show tyranny once and for all, and let the children of sanity inherit the kingdom of California for good on Sept. 14.