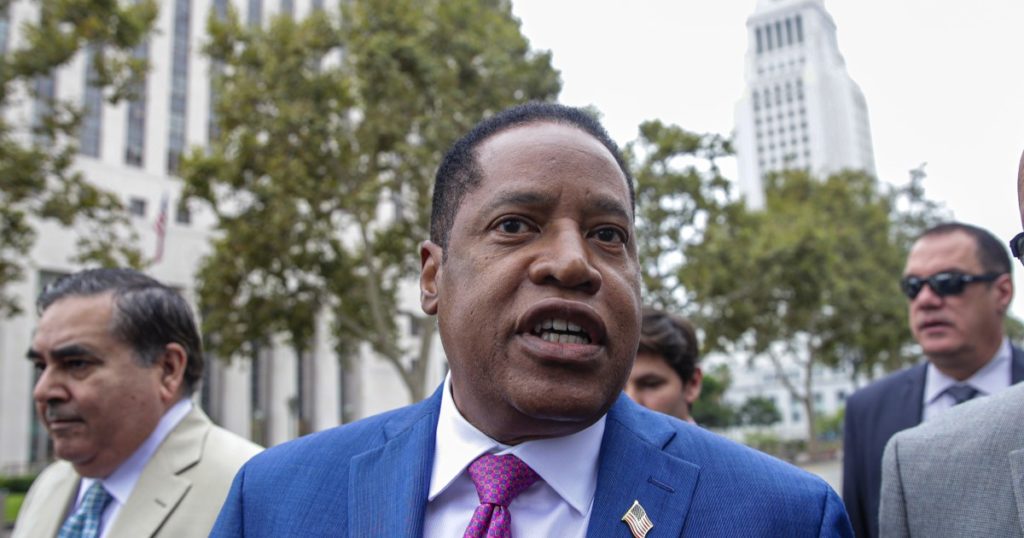 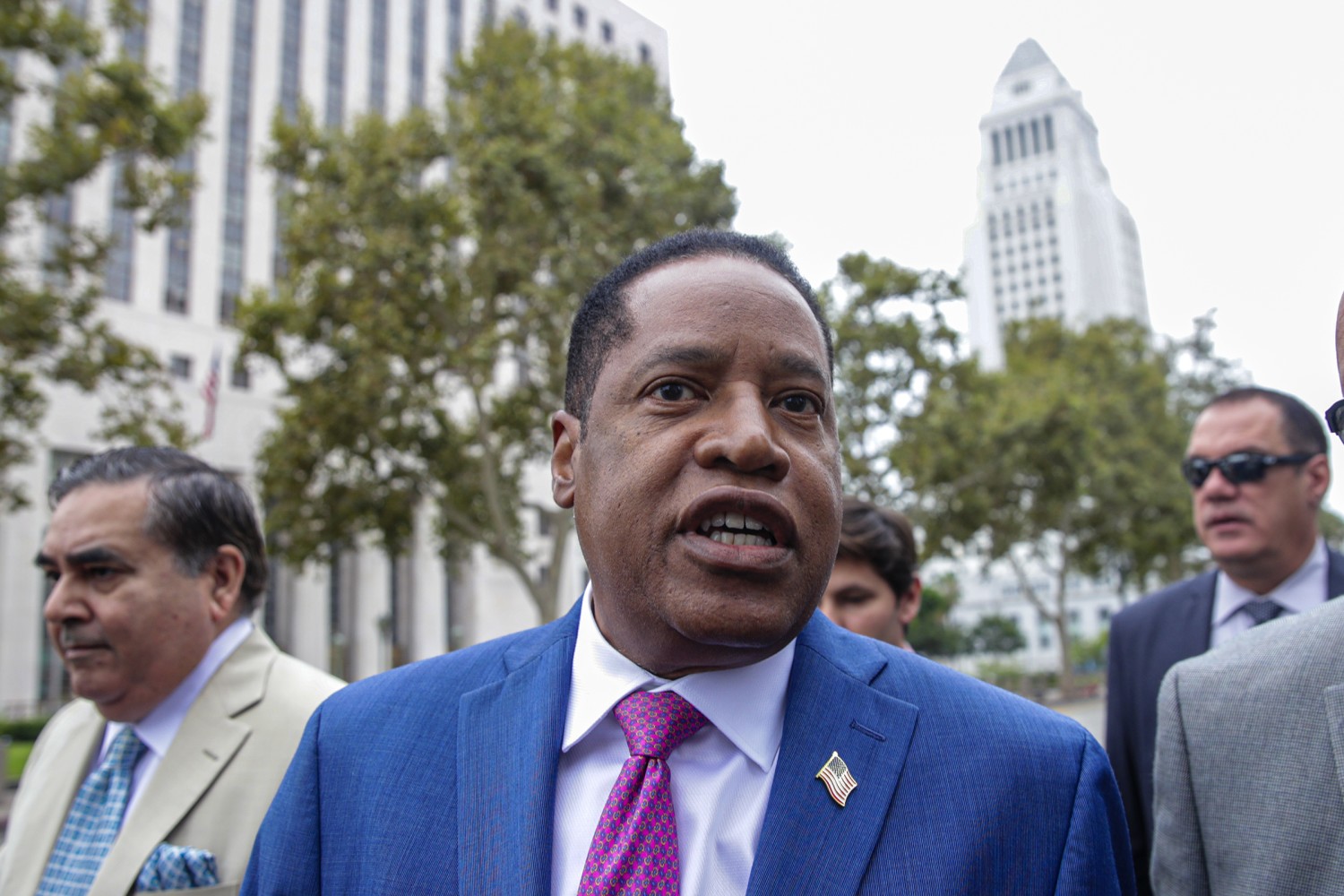 Within 24 hours of Donald Trump riding down that golden escalator into the heart of America’s political consciousness, Larry Elder once recalled, he had the reality TV star pegged as the next president. He urged his radio audience: “We ought to get behind him.”

Two years into the Trump presidency, Elder sounded rhapsodic about the choice he and other Americans made. “The election of Donald Trump in 2016, in my opinion, was divine intervention,” he told an audience of conservatives gathered at a Rancho Palos Verdes resort in 2019. “It was a miracle. He is almost God-sent.”

Elder sounds decidedly more guarded about Trump these days, as the longtime Los Angeles radio host leads 45 other challengers in the race to replace Gavin Newsom, should Californians vote to recall the governor on Sept. 14.

Elder has taken pains to talk about all the other Republican presidential candidates he supported before Trump. When The Times asked to talk to him about Trump, his campaign spokeswoman recommended a focus on Elder’s “prominent Democratic or independent supporters.” And Elder told CNN recently that he’s “indifferent” on the prospect of receiving an endorsement from Trump, who remains immensely popular among Republicans nationally.

Elder has been walking what one conservative commentator called a “tightrope” — balancing the imperatives of many of the most passionate recall proponents, who love Trump, while also trying to hew to more centrist ground in a state where Democrats and nonpartisan voters dominate.

The internet commentator Allah Pundit theorized that the Republican frontrunner is “getting a crash course on the agonizing dilemma every Republican running for office has faced since 2016, when a decisive chunk of the party’s base went full-cultist for Trump.”

Elder “wants to present himself as a generic Republican and would-be statesman, not the sort of fire-breathing Trumpist whom Californians would recoil from,” the blogger wrote.

Newsom defenders would like to tie Elder as closely as possible to Trump, a deeply unpopular figure for the majority of Californians. The former president lost California to Joe Biden by nearly 30 percentage points in the 2020 election.

One anti-recall campaign mailer featured no fewer than five pictures of Trump. A TV spot shows a picture of a smiling Elder and Trump side by side and urges voters to “stop the Republican recall.”

With a little more than a week before the election, there has been no indication that the former president will take a position on getting rid of Newsom, or lend support to any of the would-be replacements. And Elder’s campaign said the recall is “not about Trump,” whom the candidate has not spoken to since the start of the campaign, while he “is focused on California, not national politics.”

In his pre-recall days, Elder gave one of his most extended descriptions of how he became a Trump fan at a 2019 retreat for the David Horowitz Freedom Center.

Elder told the gathering how he at first underestimated Trump on that June day in 2015 when he rode a Trump Tower escalator to his presidential announcement event.

“I watched it. I was by myself. And I said, ‘Boy, that’s pretty un-presidential. This is going to be one of the shortest presidential campaigns you’ve ever seen,’” Elder said, according to a transcript of his speech.

But the following day, when he was in Sunland, he said several people approached him and all spoke favorably about Trump. He told of one man who said, “This guy is connecting the way … nobody else has connected in a long time.”

The next night, he went on his radio show and told his listeners they should get behind Trump. Later in the campaign, he joined Trump for a campaign event in Cleveland and was impressed that the candidate talked about the importance of allowing parents to choose where their children go to school.

He made what proved to be another important connection to Trump’s world years earlier. It happened when he repeatedly welcomed a conservative high school student, Stephen Miller, as a guest on his radio show. By 2016, Miller had become a Trump advisor, and Elder emailed his old protege with pointers on how the Republican nominee should debate the question of illegal immigration and resuscitate past sexual misconduct allegations against Bill Clinton.

After Trump made it to the White House, Elder frequently jumped to his defense. In one radio commentary, about the inauguration, he mocked participants in the Women’s March against Trump as “obese.”

‘When you look at all these women that have marched, something like 2 million, Donald Trump has probably gotten more obese women off the couch and in the streets, working out, than Michelle Obama did in eight years,” Elder said in 2017 remarks first reported by CNN.

Elder dismissed many critics as unable to take an objective view of the former president’s actions, accusing them of suffering “Trump Derangement Syndrome.”

One instance came when congressional negotiators said that during an immigration debate, Trump referred to “s—hole countries,” and wondered why America took more immigrants from Africa than from countries like Norway. Critics called that racist.

Elder objected in a column that Democrats were hypocrites to criticize the president because, in his estimation, others had made similar observations. He recalled that President Obama, describing the difficulty of achieving peace in the Mideast, had reportedly said in private: “If only everyone could be like the Scandinavians, this would all be easy.”

Elder wanted to know why Trump had been dubbed “racist” but Obama had not.

He wrote another column on the eve of Trump’s 2020 reelection bid, cataloging a list of achievements by the president. He credited Trump with low taxes, a strong economy and negotiating peace deals with the United Arab Emirates and Sudan.

Many excoriated Trump for fueling racial tensions, but Elder took a contrary view. He credited the president with “presiding over the best unemployment numbers for Blacks in the history of America” and signing legislation to reduce sentences for prisoners, including many Black men, sentenced for crack cocaine offenses.

“Imagine where Trump would rank in the polls,” Elder wrote, “but for the constant, relentless negative media coverage and deranged opposition that would have suffocated the average politician.”

The admiration flowed in both directions. In the negotiations over debates against Biden, Trump’s team named Elder as one possible moderator.

Soon after he entered the governor’s race, it became clear Elder would try to project a more modulated relationship with Trump and the Trump era. He told a group of newspaper opinion editors, “I do believe Joe Biden won the election fairly and squarely.”

That immediately infuriated some Trump true-believers, such as Jenna Ellis, a lawyer who continued to press Trump’s claims of 2020 election fraud, even though they had been rejected by election officials and multiple courts.

“This could cost @larryelder a lot of votes in California” Ellis tweeted on the subject. “I fully disagree with his comments here and he was clearly poorly advised.”

Elder then revised his position. He told Newsweek that he gave the answer to “move the hostile interview along,” as he attempted to focus on other issues he said Californians cared more about. The leading Republican in the recall also asked voters to consider the many times on radio and in his column that he had “expressed extreme skepticism about the fairness of the 2020 election.”

In an early August interview, Elder objected when host Michael Smerconish introduced him as a “Trump-supporting radio host.”

Trump and Newsom maintained a surprisingly cordial, if uneven, relationship when the former president was still in office. The California Democrat criticized the Republican president, for instance, when he blamed California wildfires on insufficient forest “raking.” But Newsom and Trump also praised each other for their cooperation during natural disasters.

With a little more than a week to go before recall voting ends, the former president has not weighed in on the race.

The “divine intervention” Elder sensed of Trump just two years ago felt well in the rearview mirror in recent days, when candidate Elder used another CNN interview to say he was “indifferent” about whether he got an endorsement from the former president. Elder’s remarks suggested his position was a matter of geography, not politics.

“If he would like to give me the endorsement, fine. If he does not want to give me an endorsement, that’s fine too,” Elder said. “I haven’t asked him. I haven’t requested it. I’ve not encouraged anybody from the outside [of California] to endorse me, no matter who he or she is.”

Elder apparently liked one recent comparison with Trump. It came from The Times of London, which on Aug. 21 headlined: “Larry Elder, the ‘Black Trump’, is close to snatching California from Democrats.” The candidate tweeted out a link to that story.