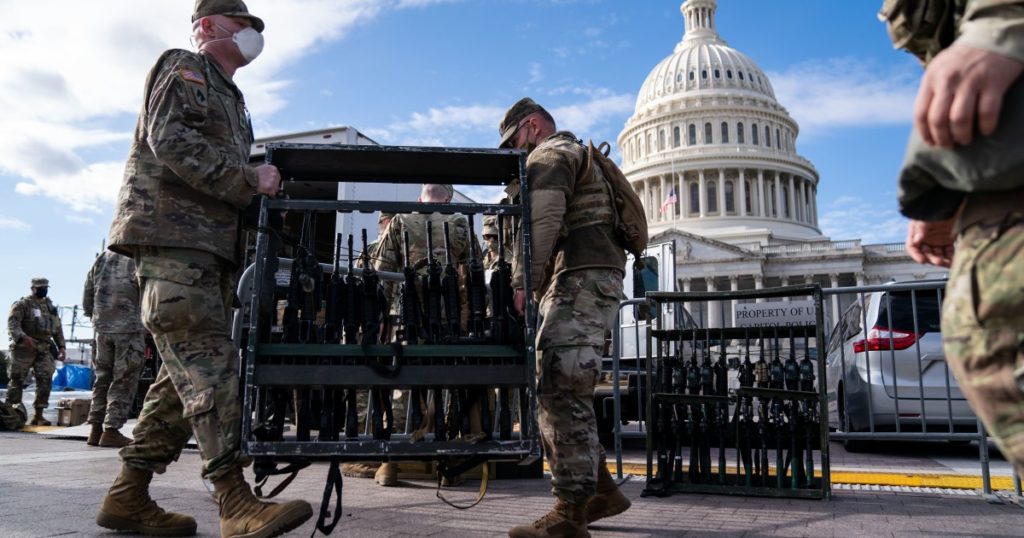 Fears of major protests by armed, far-right Trump supporters outside the Capitol and at state capitols Sunday proved unfounded, with only small groups, some carrying weapons, gathering in a handful of cities including Austin, Texas, Phoenix, Salem, Ore., and Lansing, Mich.

With large-scale contingents of local police, state troopers and National Guardsmen on patrol, the extremists remained peaceful or absent from Capitol Hill and beyond as Sunday evening approached. The FBI had warned of protests Sunday, based in part on notices circulating online urging people to gather at noon, “armed at your personal discretion.”

Authorities remain concerned that right-wing violence could still erupt before or after Wednesday’s inauguration of President-elect Joe Biden, as it did Jan. 6 when President Trump, at an outdoor rally, incited supporters to descend on the Capitol as Congress was in the midst of certifying Biden’s victory. Nearly a hundred people have been charged in connection with the rioting in which five people died; more than 300 others are under investigation.

In Washington, where the Capitol was encircled with a high metal fence patrolled by police and thousands of armed National Guard troops, officers spotted one man with a gun in a holster about a mile from the iconic building. Guy Berry, 22, of Gordonsville, Va., whose Facebook page features a photo from the Jan. 6 riot, was charged with carrying a pistol without a license, possession of a large capacity magazine and unregistered ammunition.

A New Mexico county commissioner wanted by the FBI in connection with the riot was also arrested near the Capitol, according to an FBI statement. Couy Griffin, founder of the group Cowboys for Trump, had pledged during a county commission meeting last week to return to the Capitol on Jan. 20 with two guns to “embrace my Second Amendment.”

On Saturday, Washington police arrested a 63-year-old Connecticut woman on charges of impersonating a police officer. Linda Magovern was stopped after she drove up to a checkpoint near Union Station, refused to put her car in park, told police she was a law enforcement officer and a member of the president’s Cabinet and then tried to drive away, according to a police report.

Anti-Trump protesters in the city’s Black Lives Matter Plaza near the White House said they were yelled at by Trump supporters holding “Stop the Steal” signs on Saturday, but that they had not reappeared Sunday.

Nadine Seiler, 55, wearing a “Maga Klux Klan” T-shirt and waving a Black Lives Matter flag, said she was afraid of being targeted but still planned to protest daily until the inauguration. Police patrolled nearby, but that didn’t make her feel any safer, she said, since she’s long been critical of local police.

When Seiler spotted two men she suspected of being Trump supporters (“no masks, hands in their pockets”), she confronted them and they left the plaza.

“I’m not letting them intimidate me. I’m fed up,” said Seiler, who is Black. “I’m going to be on the offensive with them. It’s time for them to understand how it feels to be under attack.”

Washington Mayor Muriel Bowser, interviewed on NBC’s “Meet the Press,” said that the overwhelming security presence in the capital reflected a somber reality that is “domestic terrorist-focused.”

“We don’t want to see fences, we definitely don’t want to see armed troops on our streets, but we do have to take a different posture,” Bowser said. “Having our fellow Americans storm the Capitol in an attempt to overthrow the government certainly warrants heightened security.”

A major ongoing question, the mayor said, concerns the failure of authorities to grapple with the threat posed by far-right extremists.

“I think what we saw here last week is that we didn’t take it seriously enough,” said Bowser. “We never believed that so-called patriots would attempt to overthrow their government and kill police officers, but that’s exactly what happened.”

Arkansas Gov. Asa Hutchinson, a Republican, said Sunday that based on intelligence from the FBI and other sources, he and other governors were “taking the necessary precautions to make sure that we protect our capitol and our citizens.”

“Every state has to look at their own intelligence matrix and make those kinds of judgments,” Hutchinson, vice chair of the National Governors Assn., said in an appearance on “Fox News Sunday.” “But I think the deterrent value of what we’ve seen over the last couple of days has had an impact, and hopefully has diminished that threat level.”

The governor cited the “historic threat” in the United States from armed militias whose adherents include neo-Nazis and white supremacists.

“This moment is just so insane,” said Mayor Melvin Carter of St. Paul, Minn., where far-right extremists have been active and highly visible. “We have seen since election day repeated demonstrations at our state capitol, as well as at our governor’s residence, that have included several individuals who have chosen that time to show up with rifles and other firearms,” Carter said on CBS’ “Face the Nation.”

“We have a president who has continued to egg on these extreme radicals to try to take action,” he added.

Members of the extremist Boogaloo Bois were spotted outside the Michigan statehouse in Lansing, where the governor had deployed the National Guard at the mayor’s request after recent threats to legislators.

A small crowd, several carrying long guns, protested outside the statehouse in Columbus, Ohio, as dozens of state troopers guarded the building. Handfuls of protesters also gathered outside the capitols in Austin, Phoenix, Columbia, S.C., and Salem.

In Austin, more than two dozen people rallied for gun rights outside the Texas capitol’s fenced grounds, many with AR 15-style rifles slung from their shoulders. One young man carried zip ties and a knife in a belt sheath.

Benjamin Hawk said he had traveled to Austin armed with his AR 15-style rifle from the Fort Worth area with a group dedicated to gun ownership, the Hibiscus Society. Hawk, 38, said he accepted that Trump lost the election, but that, “We have the right to free speech without fear of being censored or persecuted.”

About a dozen protesters stood in front of the statehouse in Phoenix, where roadblocks, chain-link fence and barbed wire had been erected to protect the building. The crowd included Boogaloo Bois, COVID-19 lockdown opponents, pandemic skeptics and Trump supporters still angry over what they baselessly claim was election fraud.

“We’re out here to support our Republic. The current government has become a group of autocrats,” said Aaron Botzbauer of Sunrise.

Botzbauer, 50, an unemployed cybersecurity worker, said he had come armed with a handgun to downtown Phoenix nearly every day since the presidential election to protest Trump’s loss and state COVID-19 restrictions. He didn’t support the Capitol riots, he said, but wondered if they “had been staged” to make the president’s supporters look bad.

Brandon Jackson, 27, of Scottsdale, Ariz., came to the state capitol wearing a Hawaiian shirt and carrying a modified American flag, both signaling his membership in the right-wing Boogaloo Bois.

A libertarian, Jackson said he joined the rally to support gun rights after protesting at the Arizona State Capitol on Jan. 6. When he saw reports later that day of rioters in Washington, he cheered.

“These were patriots reclaiming the Capitol. When your voting system doesn’t work, when there is fraud, your voice doesn’t matter,” he said. “…I was excited to see it.”

In Salem, eight protesters in tactical gear and carrying long guns gathered in front of the boarded-up Oregon statehouse. Two wore a Hawaiian shirts. Others wore ski masks. One carried a sign that said, “All elections are illegitimate.”

One was an unemployed construction worker who lived nearby. Armed with a handgun and AR 15-style rifle, he also sported a helmet and armored vest. He was upset , he said, about expanded gun control, COVID-19 lockdowns and Amazon’s removal of the social media app Parler. He saw the storming of the U.S. Capitol as unfortunate, but compared it to the Boston Tea Party as an example of the lengths people felt they needed to go to protect their rights.

“We don’t want a civil war, we want liberty for everybody,” he said, adding that the government was increasingly infringing on people’s rights. “We’re humans, not sheep. We’re at the top of the food chain and our government is trying to make us the bottom.”

In Washington, Sgt. Eric Scuderi of the Maryland National Guard was on the lookout for protesters outside the Capitol, where he is to be stationed through the inauguration Wednesday.

Scuderi, 40, of Mount Airy, Md., a father of two and school bus driver, said he has seen people from across the political spectrum bring coffee and donuts to the troops, and figures, “It’s our job to stay in the middle.”

Sunday was quiet, without any major protests. Standing on a corner with his rifle strapped to his chest, Scuderi spotted two men in reindeer costumes.

“We’re looking for a PETA rally,” they said.

“Well, there are protesters here,” he said, “Certainly not the type we were expecting, but I’ll take it.”