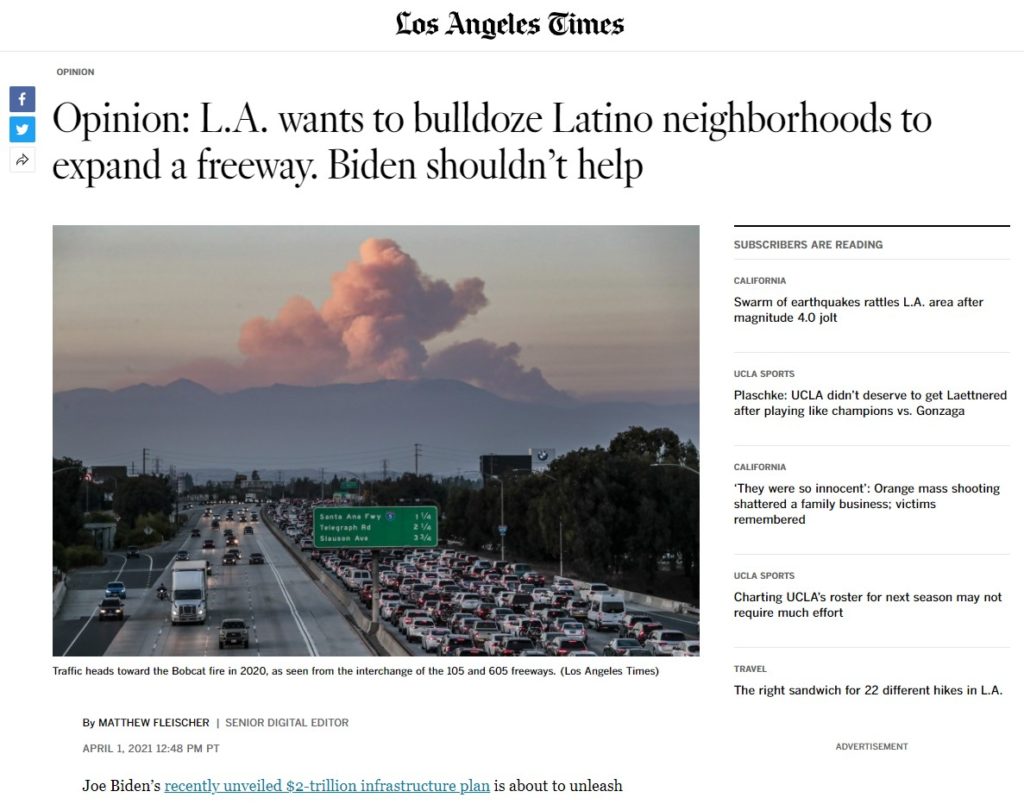 Last week, in an editorial entitled “Opinion: L.A. wants to bulldoze Latino neighborhoods to expand a freeway. Biden shouldn’t help” the Los Angeles Times urged the Biden Administration not to fund problematic highway widening in its proposed infrastructure plan. The editorial, penned by Matthew Fleischer, acknowledged Streetsblog L.A.’s “aggressive reporting” on Metro and Caltrans $5+billion plans to tear down hundreds of homes to widen the 605 and 5 Freeways.

Fleischer first acknowledged Alex Contreras, the Downey native who sounded the alarm about her neighborhood’s homes, a school, and a park threatened by Metro’s plans to widen the 5 Freeway. [Get involved in the campaign Contreras started via the Happy City Coalition that she co-founded.]

From the Times article:

L.A. is still trying to expand its freeways. And it appears willing to perpetuate a legacy of racism in the process.

When L.A. built its freeway system, it rerouted the elaborate designs of freeway engineers — often at considerable expense — to avoid white neighborhoods and instead destroy thousands of homes in racially diverse communities such as Boyle Heights. Many of the freeway exiles who lost their homes wound up settling in southeast L.A. County cities such as Downey, where their neighborhoods are now once again on the chopping block.

Metro is mulling plans to … spend billions to obliterate Latino communities in service of car commuters.

To state what should be obvious: There is no universe where this is an acceptable option.

Under pressure from advocates such as Alex Contreras, a 26-year-old Downey resident whose family home is in the potential path of destruction, and aggressive reporting from Streetsblog L.A., Metro has offered new plans to scale back the scope of the displacement.

But hundreds of homes are still in jeopardy.

Metro has about $1 billion available for the project [I-605 Corridor Improvement Project]. According to Metro officials, it will need at least $4 billion more. And it’s hard to imagine they aren’t licking their lips at the thought of getting a piece of Biden’s $2-trillion pot of gold.

So why on earth is Metro prioritizing a problematic freeway expansion in a world where work-from-home can and should become the new normal?

…Metro officials said that L.A. County voters signed off on these plans when we passed transportation funding measures M and R. They also said that standstill freeway traffic comes with its own climate implications. And that widening the 605 won’t be a case of “induced demand” because the demand is already there. Traffic jams at the proposed work site are among the worst in the country.

Fleischer offers up Metro’s claim regarding not inducing demand but neglects to unpack it. This isn’t the first time that Metro has claimed that its highway projects don’t contribute to more driving. But decades of research show that show that new lane miles do just that; they fill with more drivers. Widening freeways induces travel, which contributes to increased congestion, increased pollution, worsened public health, and a worsened climate crisis.

…at some point we need our transit agencies to draw a line in the sand. If they can’t end car-centric urban planning, they can certainly stop enabling it with freeway expansions. And if they [Metro] refuse to, it’s up to Biden, Buttigieg, and Congress to take their piggy bank away.

For Streetsblog coverage of Metro’s 605/5 freeway widening, start with these posts:

If you support SBLA reporting – including on harmful freeway widening and much more – please consider making a donation to support the work.