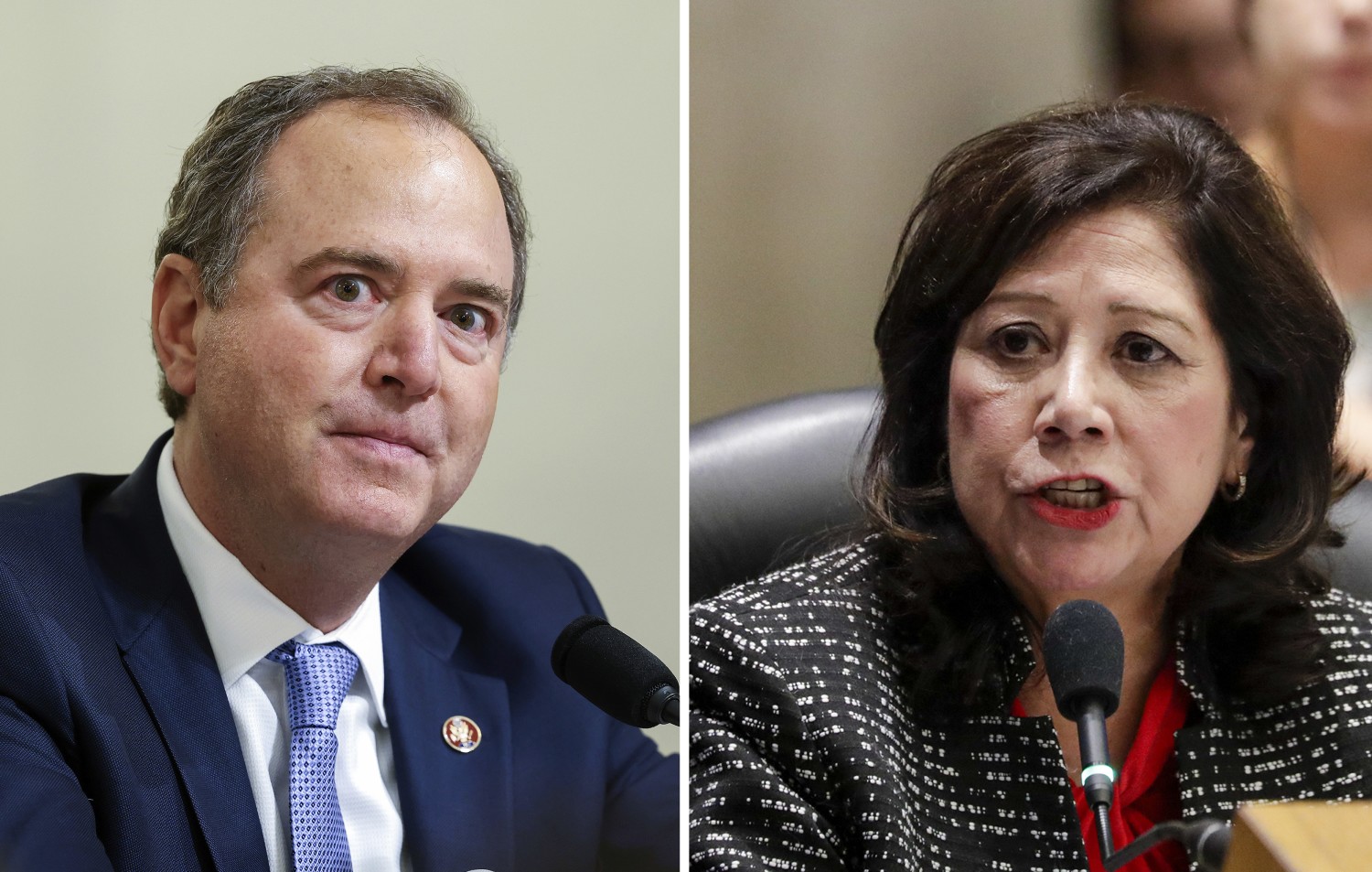 Twenty years ago, Adam B. Schiff and Hilda Solis stood on the steps of the U.S. Capitol and, along with other members of Congress, sang “God Bless America” in response to the terror attacks of Sept. 11.

They were both first-year members of Congress then, and that day and its aftermath would shape the course of their political careers. They, along with six other public figures, shared their recollections on how 9/11 personally affected them with The Times.

But the two Democratic Los Angeles-area representatives — Schiff remains a member of Congress representing Burbank, while Solis is now a Los Angeles County supervisor — also reflected on the broader implications of the event: on our political polarization, American military power, parallels to the pandemic and more.

Here are excerpts of those interviews, condensed and edited for clarity, on how two longtime leaders are processing the two decades of the post-9/11 era.

On the impact of 9/11 on our national security See the article : McConnell wants to delay Trump impeachment trial to February.

“A lot of what Al Qaeda was doing was designed to provoke a reaction, to provoke a commitment of resources by the United States that were unsustainable. And in fact, in that respect, we devoted enormous amounts of our most precious resource — the deployment of our troops, the risk of the lives of our troops, but also untold trillions of dollars in this effort to fight what attacked us on 9/11. And some of that response was probably what Al Qaeda was hoping for.

“We were effective in preventing another massive attack like 9/11. We were ineffective in changing the nature of Afghanistan. And after 20 years, to make the decision that we could be there another 20 years with no different result. And so I think that our response to that tragedy is a mixed one.”

On the limitations of American military power

“The overriding impact is a recognition of the limitations of military power, and our ability to accelerate another country’s transition to a more democratic, pluralistic society. And I think, had we to do it all over again, [we] would have not adopted a strategy of a large military presence. We would have taken a much more surgical approach to the problem, and it probably would have been a more successful, less costly approach. So, I think both our experience in Iraq and Afghanistan has taught us the limits of even the strongest military power in the world, and given us a real humility about what we’re able to do, what any country is able to.”

On the parallels and differences of 9/11 and the Jan. 6 breach of the Capitol

“I remember on Jan. 6 thinking back to that day, because there was a lot of the same kind of uncertainty, anxiety about what was going on among the members of Congress. But I remember thinking that impact was going to be very different, very unlikely to have the same unifying impact than the attack of Sept. 11.”

“One of the principal distinctions is the Sept. 11 attack was an attack from the outside. And that, for that reason, had that unifying impact. This was an external enemy. The January 6 attacks were from within, and were incited by the leader of one of the parties, and many of that party are engaged in a fervent denialism about the events of that day. There’s no way that could have the same unifying impact — in particular because the former president, and many in his party were pushing out a big lie that was a large part of the motivation for that attack. … There was and is a real threat to the physical well being of our people in the lives of our people from those who orchestrated the 9/11 attacks. But there’s a real threat to our democracy from those who orchestrated the Jan. 6 attack. That has not receded and really poses a dire threat to the democracy.”

On whether he, as the head of President Trump’s first impeachment, has contributed to the nation’s polarized politics

“I had a very different reputation five years ago, before the last administration, and I’ve had since the last administration. I haven’t changed at all. … And so yes, I have become a lightning rod for doing my job. But one thing that I find encouraging is that on the Jan. 6 committee we have two very prominent conservatives who are equally devoted to getting to the truth, and the same crowd that would attack me are attacking them, and for the same reason. And that is, they don’t want the truth exposed. They will make a polarizing figure out of anyone who attempts to do so. And therein, to my point of view, lies the challenge the country faces.”

This may interest you :
Biden’s foreign policy won’t be Obama 2.0
When President-elect Joe Biden takes office in January, some of the first…

“I’ve heard … in the course of my career: ‘Why are we over there? Why are we spending money here or there?’ There are reasons for that. And I support some of that. But I also think that people were tired of the war there. And we did find closure. I think the fact that they were able to find Osama bin Laden, which was really critical. Look at what’s happened now with Guantanamo Bay. The people are pretty much gone, right? That place is going to probably be shuttered sooner or later, as well. … But that’s the direction that our country’s taking. And I can just see that people are tired. They’re tired, and they’re worn.”

“I can say that, at least in a county as large as ours, the largest one in the country, that a good number of people have participated in getting vaccinated and getting tested and using their masks and doing all the right things. So I don’t think it’s as polarized as some people say. And I think that people have to be very cautious of that. And that includes also the media, and not just focusing on the loud voices, but it’s about really looking at at what’s good for the greater community.”

“One of those ‘aha’ moments, so to speak, it was when we were distributing food out in our different communities, out in the San Gabriel Valley, in East Los Angeles. We had people coming in as far away as West Hollywood, Studio City coming in for food that the L.A. Regional Food Bank and the county partnered on. People were coming in fancy cars, but they lost their jobs. And they didn’t look like me. But it meant everybody was impacted. So that to me was one of those moments where people were starting to come together and understanding that it was for the far greater good to come together and help each other out and to use our resources in a way that could help provide that assistance that was so needed right away.”

“I remember going and visiting as secretary of Labor, the rebuilding of the towers and actually going in before the public did, and seeing the names in the pool, and those names engraved there. So it wasn’t lost on me. And the fact that that was also rebuilt into something else. Not the same, but something different to memorialize those people that gave their lives.”

“The way I see it is it’s a way to memorialize our history, what happened, but also to lift people up, to give them hope. That’s what it’s about.”

On the same subject :
California recall news: Cox and bear, Jenner and athletics
The campaign to oust Gov. Gavin Newsom from office in a recall…